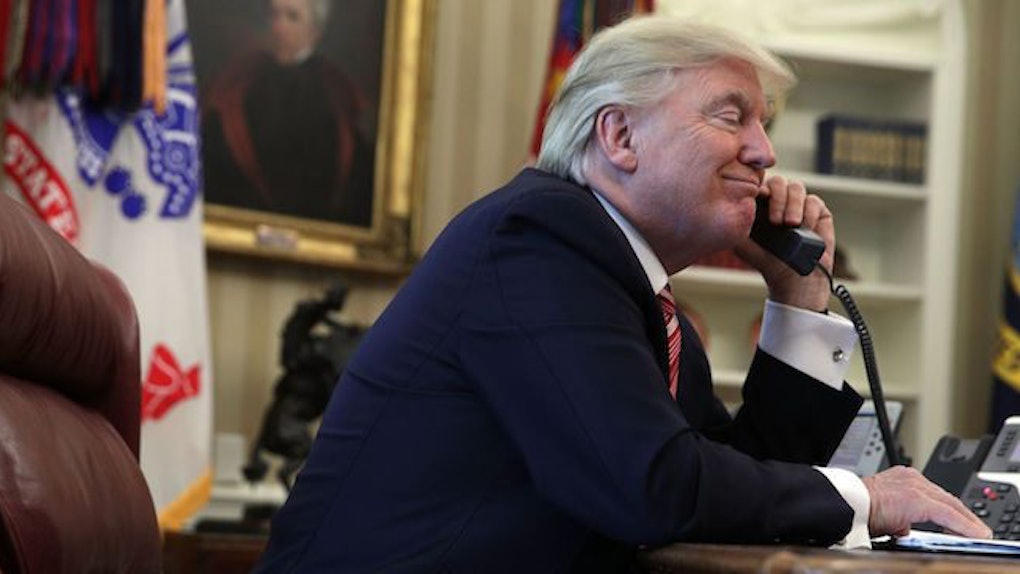 On Thursday, Aug. 3, The Washington Post published transcripts it obtained of phone conversations President Donald Trump had with Mexican President Enrique Peña Nieto and Australian Prime Minister Malcolm Turnbull. The transcripts painted a very unflattering picture of Trump, generated a lot of discussion on social media, and arguably revealed him to be a leader who's completely out of his depth on a wide array of issues. While neither chat went especially well, Trump's conversation with the Australian prime minister was particularly awkward and has people pointing out a tweet he sent about it back in February.

In Feb., The Washington Post reported Trump's conversation with Turnbull was rough and claimed the two sparred over a deal made between the Australian government and the Obama administration for the U.S. to accept 1,250 asylum seekers from Australian-run detention centers on the Pacific islands of Manus and Nauru.

After The Post's report, Trump called the deal "dumb" in a tweet on Feb. 1.

But the Trump tweet that came two days later, on Feb. 3, is what is really getting people's attention following the release of the transcripts of the phone call. In the tweet, Trump claimed their convo was "very civil."

Based on what's in the transcript, however, Trump wasn't being entirely honest about the nature of his chat with the Australian prime minister. The transcripts show Trump told Turnbull,

Look, I spoke to Putin, Merkel, Abe of Japan, to France today, and this was my most unpleasant call.

This is pretty antagonistic language for a U.S. president to use toward a leader of a country that's a top American ally.

People on Twitter called Trump out for his Feb. 3 tweet and the fact the transcripts contradicted his claim the convo was "civil."

The conversations Trump had with Mexico and Australia's leaders were riddled with absurd statements and false claims.

Trump erroneously claimed he won in the state of New Hampshire (Clinton won) and referred to it as a "drug-infested den." He also made a confusing statement about "local milk people" in relation to refugees, talked about himself in the third-person, and referred to himself as the "world's greatest person," among other baffling comments.

While it's certainly problematic for the content of a president's private conversations with other leaders to be leaked to the public for a number of reasons, this still offers us some very unsettling insights into how Trump operates.

What's arguably been revealed here is Trump's utter incompetence when it comes to global affairs and his inability to exhibit appropriate behavior when interacting with foreign leaders.