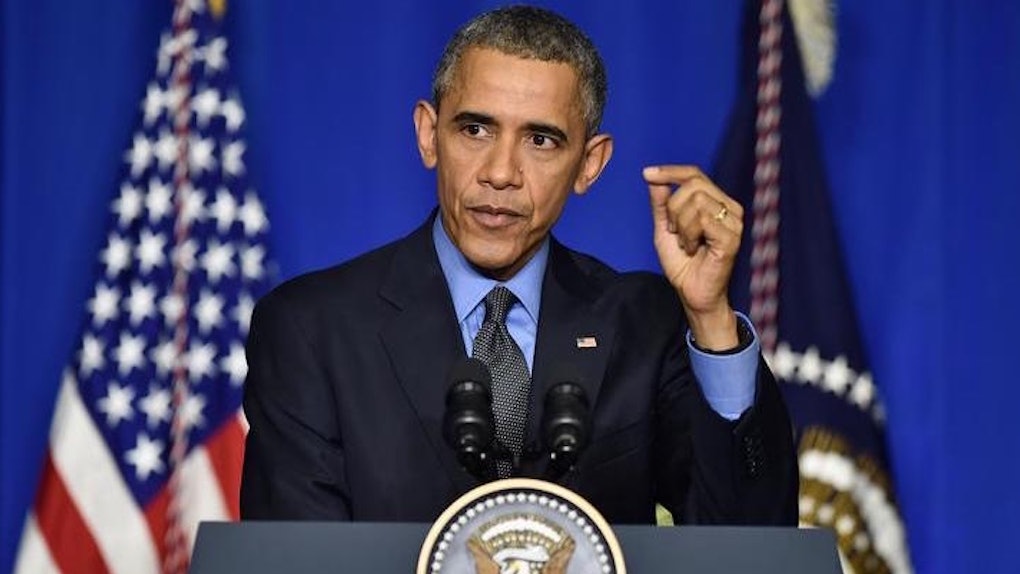 On Sunday night, President Obama addressed the public from the Oval Office for just the third time in his presidency.

The president was speaking on the subject of terrorism in the wake of the deadliest terror attack in America since 9/11.

Needless to say, both the setting and timing meant this was a huge deal.

But by the time the president finished his speech, many were left feeling underwhelmed. Obama offered very little in the way of new information or policies, making it confusing as to why he chose to make such a rare primetime address.

The president's speech was largely focused on why his strategy against ISIS is prudent and effective.

He also reiterated the importance of exhibiting tolerance and solidarity, particularly with Muslims.

But if one really had to sum up Obama's speech, he essentially just told the entire country to "chill the f*ck out about ISIS."

And, even if you feel like it was unnecessary for him to speak from the Oval Office, he's absolutely right.

It's a message this country desperately needs to hear at present, given how palpably divided it is -- particularly in regard to terrorism, Islam and refugees. This schism is largely a consequence of differing perspectives on the level of threat terrorism actually poses to the US.

In truth, terrorism, albeit frightening, is not an enormous threat to America or its citizens (statistically). Believing otherwise only serves the goals of terrorist organizations like ISIS, al-Qaeda and Boko Haram, among others.

To put this into perspective, between 2000 and 2014 only 2.6 of all the victims of terrorism worldwide resided in Western countries (this includes 9/11). Americans are far more likely to die in a car accident or from gun violence than from a terror attack.

This is why the president simply wants the country to take a deep breath and embrace logic over fear as it responds to the challenge ISIS presents.

ISIS wants to incite hysteria. It's a terrorist organization, it exists to spread terror. If we overreact to terror attacks, the terrorists win, we lose.

To borrow from comments the president made in the wake of the Paris terror attacks,

The most powerful tool we have to fight [ISIS] is to say that we're not afraid, to not elevate them, to somehow buy into their fantasy that they're doing something important.

Thus, President Obama's address on Sunday was, in a roundabout way, more about what we shouldn't do against ISIS as that is arguably just as important as what we're already doing, if not more so.

Dying in a terror attack is certainly an unsettling prospect and events like what recently occurred in San Bernardino, California are undeniably terrifying. But they are also very rare, and do very little in the way of inflicting serious damage on the overall well-being of our society -- unless we allow them too.

The real danger lies not in terror attacks themselves, but in how we respond to them. As James Fallows of The Atlantic put it,

The damage attackers do is never through the initial attack itself. That is true even for attacks as gravely damaging as those on 9/11, or as brutally inhuman as the most recent ones in Paris or San Bernardino. The attacks themselves, even the most grievous, are the feint. The gravest damage always comes from the response they evoke, from what the target society does to itself when attacked... The goal of an attack is only incidentally to kill. Its real ambition is to terrorize—to provoke, to disorient, to tempt a society or government to lose sight of its long-term values and interests.

ISIS wants us to make choices that contradict our values.

The terrorist organization would be thrilled, for example, if we adopted suggestions from Republican presidential candidate Donald Trump and shut down mosques while forcing Muslims to carry special identification.

This would reinforce the fallacious notion the West is at war with Islam -- a lie that's central to ISIS' recruiting efforts.

This is precisely why the central theme of Obama's address was how imperative it is we avoid overreacting to terror attacks.

Accordingly, Obama once again made sure to highlight deploying US combat troops would only exacerbate an already complex situation and play right into the terrorists' hands.

And this is not just an overly cautious stance produced by weariness from America's costly and lengthy misadventures in Iraq and Afghanistan, it's a position supported by evidence and numerous experts.

We also need to acknowledge the profound difference between an ISIS-inspired attack and an ISIS-directed attack.

ISIS would love us to believe it dictates every single attack carried out in its name. But it's not nearly this organized.

These are the realities President Obama wished to present to the country on Sunday evening.

Some might interpret the president's speech as empty rhetoric without action in the face of an imminent threat.

But they should be reminded the US conducted over 6000 airstrikes against ISIS in Iraq and Syria since August 2014, and US special forces are currently active in the region.

Not to mention, Kurdish forces recently retook the Iraqi town of Sinjar from ISIS and wouldn't have done so without support from the US from the air.

America has hardly been on the sidelines in the fight against ISIS.

This is not to say we should be deluded into thinking defeating these terrorists, or terrorism in general, will be easy. Destroying ISIS, which is a lofty goal as it is, will not rid the world of terrorism.

Terrorism, in some form or another, will likely always exist. But that does not mean we should collectively lose our minds, sacrifice our values and support imprudent foreign conflicts that only make matters worse.

We overreacted to 9/11 and supported two misguided wars in Afghanistan and Iraq that we are still facing the consequences of today -- this includes ISIS.

The fact of the matter is the US helped created ISIS with its invasion of Iraq in 2003. It's also true the arguably premature withdrawal of American forces from Iraq in 2011 played a role in ISIS' rise. But ISIS began as an affiliate of al-Qaeda in Iraq in 2004 -- a direct consequence of the US invasion.

Simply put, ISIS does not just aim to produce fear, it is a product of fear in and of itself -- America's overreaction to 9/11.

We invaded Iraq not just because we feared Saddam Hussein had WMDs, but because we 'd been led to believe he was in cahoots with al-Qaeda. Neither turned out to be true, but we still ended up fighting a long and chaotic war in the country.

In the process, we destabilized the region, increased enmity toward America and helped catalyze the genesis of ISIS. This should serve as a cautionary tale of what not to do after terror attacks.

Fighting terrorism effectively is a matter of refusing to allow fear to dictate our actions more than anything else.

This does not mean opposing all military action against terrorist organizations, it means ensuring our responses to terror attacks are proportionate, ethical and rational.