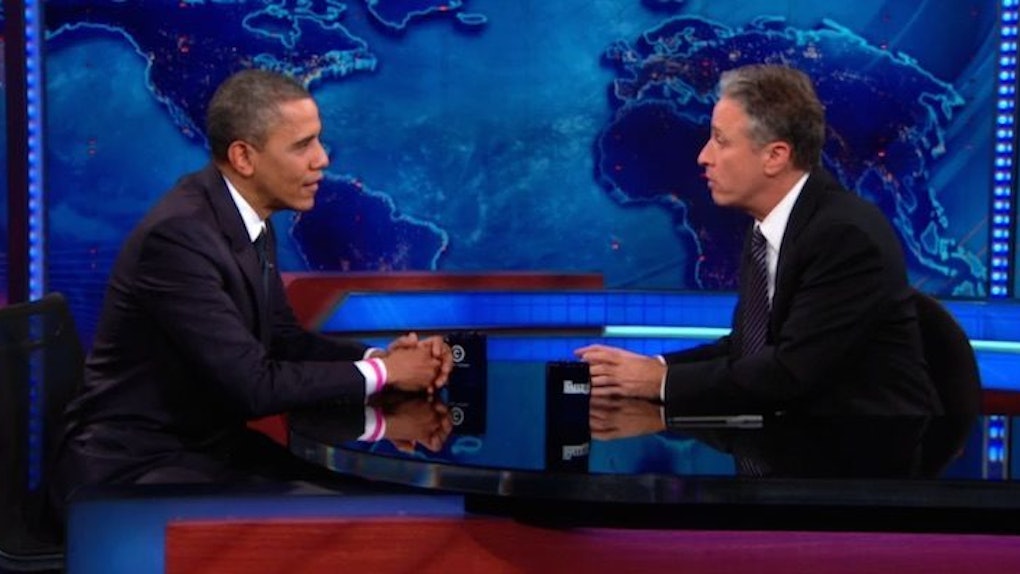 On Tuesday, President Obama appeared on "The Daily Show" for the seventh and final time with Jon Stewart.

In August, Stewart will relinquish his duties as host of the show and comedian Trevor Noah will take over.

President Obama has about a year and half left in office, and much of the nation's attention is already focused on who might succeed him.

Thus, quite appropriately, the conversation between Stewart and the president focused largely on what he's done while in office, what he wishes he'd done better and what he hopes to accomplish before he leaves the White House.

The discussion covered everything from the recent Iran nuclear deal and climate change to the maltreatment of veterans and the polarized culture of American politics.

In the past, Stewart has been criticized for being too easy on the president during interviews. Stewart has typically replied to such comments by arguing he's a comedian, not a journalist.

But on Tuesday, while the conversation was often jovial, it definitely had serious undertones, and Stewart pressed the president on a number of points.

This was particularly evident on the topic of veterans.

Stewart wondered how a country that is vehemently patriotic and proud of its military has habitually fallen short in terms of taking care of those who have fought in its wars.

The president agreed with Stewart that America has failed its veterans, but he also contended the situation has improved for this group since he took office, particularly in terms of homelessness.

He also argued that the entire issue was reflective of a much larger problem:

Part of my job for the last seven years, and part of my job over this last year coming up, is to continually improve and make sure the government is functioning as well as it could. But you can't use that as an excuse for the big structural problems that we're facing right now that are not being addressed -- typically those have to do with the fact that the political system is broken as opposed to because government can't work properly.

In other words, it's the government's job to serve the people, but the reason it often doesn't work properly is due to the fact many don't see it as a means of enacting substantive change in society.

The president fundamentally disagrees with this mindset, stating:

What I fight against is the cynicism that is fed by this notion that government doesn't get stuff done. And the truth of the matter is... every single day, there's a bunch of stuff that is getting done that is really important and helps a lot of people.

The president was not arguing the government is the answer to all of our problems, but that we can't view it as the source of all that ails us:

[America] is going to be an ongoing project, and it's a project of citizens. It's, how do we work together to get things done? It will be imperfect, but overtime, is it better? And here's the thing I can say: Government works better than when I came into office. The economy, by every metric, is better than when I came into office. Am I satisfied with it, no, and should voters be satisfied with it? Absolutely not, because otherwise if we get complacent and lazy then stuff doesn't happen.

As the president's time in office winds down, he's becoming increasingly candid during interviews.

But it was particularly telling to hear the most powerful individual in American politics utter the words, "the political system is broken." And when it comes down to it, it's difficult to disagree with him.

The country arguably hasn't been this polarized since the Civil War. Ideologically, America is completely split, a fact evident both within the government and among the public.

When you look at the biggest challenges we've faced as a country over the past decade or so, this schism has often served as an impediment to progress.

But, while speaking with Stewart, the president made it clear he hasn't given up hope:

The one thing I know, as I enter into the last year of my presidency, is that the country is full of good and decent people. There is a sense of common purpose at the neighborhood level, and the school, and in the workplace. And that dissipates the further up it goes because of all the money and because of all the filters and all the polarizing that takes place in terms of how our politics is shaped. But the only way to prevent that is by people getting involved... If people are engaged, eventually the political system responds. Despite the money, despite the lobbyist, it still responds.

Indeed, it is the American people who have helped the president remain optimistic. When we demand change, it comes.

But it will arrive more expeditiously if we learn to stop seeing those who disagree with us as the enemy.

If nothing else, we can all agree we'd like to see this democratic experiment we call the United States succeed, we simply have different visions of how to accomplish this.

But nobody's opinions are sacrosanct, and a country's well-being shouldn't be sacrificed for the sake of tedious political discourse.

America is at its best when a happy medium is found between conservatism and liberalism.

Thus, perhaps the biggest takeaway from the president's last conversation with Stewart is, as a country, we desperately need to make a collective effort to find common ground.

Watch the extended segment of the interview below: