News
By John Haltiwanger
May 29, 2015
The Ice Cream Informant

What do chocolate chip cookie dough ice cream and campaign finance reform have in common?

In 2012, Cohen established Stamp Stampede, a non-profit grassroots organization with one primary goal: stamp money out of politics (in a very literal sense).

The movement urges people to stamp their money with messages promoting a constitutional amendment to get special interest money out of politics -- and it's totally legal.

Last week, Cohen took the time to discuss this movement with Elite Daily, highlighting its origins, motivations and ultimate hopes.

Cohen explained he was initially inspired to get more involved in campaign finance reform after the Occupy Wall Street movement in 2011.

In his view, the underlying catalyst for the entire movement, and its arguably discombobulated grievances, was discontentment with money in politics.

After the Occupy movement dissipated, he wanted to find a focused way to perpetuate its message and aims.

Stamp Stampede was the perfect solution, or as he put it:

Money, the way money changes hands, is kind of the original viral marketing. Your voice could be incredibly powerful if you use money as your medium. Every time you stamp a dollar bill, 875 people see it as it gets passed around. If you stamp three bills a day for a year, you create just about a million impressions over the next 2.5 years.

For quite some time, Cohen has felt big money in politics is eroding American democracy. He argues the Supreme Court's 2010 decision in Citizens United vs. FEC, among other rulings, promotes corruption by characterizing money as free speech and corporations as people.

The controversial Citizens United ruling paved the way for Super PACs and dark money, as Vox notes, and outside spending on federal elections increased exponentially following it. 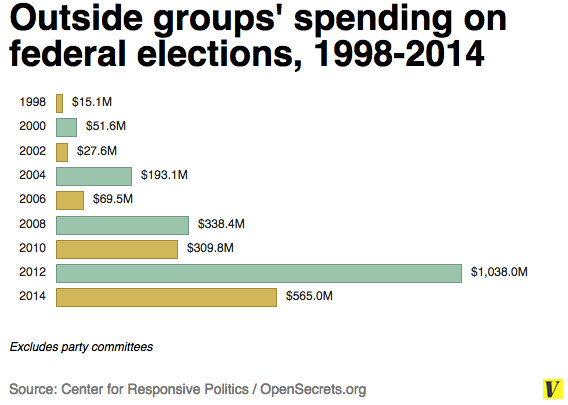 As a consequence of Citizens United, Super PACs can procure and spend unlimited amounts of money on candidates they wish to endorse. None of this money may be given directly to candidates or political parties, but this tenuous limitation does nothing to inhibit corruption.

Money is the name of the American political game, and it dictates the direction of this country. The wealthy have an inordinate amount of influence. It's no coincidence a majority of members of Congress are millionaires (50.8 percent).

We've created a system in which the ultra-rich have a much easier time making their voices heard, particularly in terms of the political candidates they support. In turn, their interests are promoted by the politicians they help elect.

Given there is an ever-increasing gap between the rich and poor in the US, it goes without saying a small minority has essentially purchased America's political system.

This is precisely why Cohen founded Stamp Stampede. He's fed up with the status quo, and the only way to reverse Citizens United and other decisions like it is through a constitutional amendment.

As Cohen contends, this won't be possible without the palpable support of people across the country.

While he's of the opinion many are already aware of big money's disproportionate influence in politics, he believes there needs to be a concerted and observable movement against it, which is where Stamp Stampede comes in:

In a big way, Stampede is a visual demonstration. Even when a lot of people are aware of stuff, you need to have physical demonstrations of support to actually change something. By making the message so prevalent, it starts to give the people the idea that 'Oh, maybe there is really something that can be done about this.' I think something like 90 percent of the population, Republicans and Democrats, want to get money out of politics. But 80-or-something percent thinks there's nothing they can do about it.

Cohen is taking the biggest problem in politics, money, and turning it into a solution. As he highlights, Stamp Stampede is hardly the first movement to employ this tactic:

In terms of turning money into media, we call it 'monetary jujitsu': using money to get money out of politics. It's been done before with the suffragette campaign in England. At the time, they were using wooden coins and would carve messages into the coins about getting women to vote.

The big question is whether or not any of this is working, or if it's even realistic. In response to this line of inquiry, Cohen noted there is evident bipartisan support for campaign finance reform, with traditional rivals like President Obama and Senator John McCain agreeing Citizens United was a step backward for America.

Since Citizens United, there has been a major movement that has sprung up across the country to amend the Constitution to get money out of politics: 16 states have passed resolutions calling for an amendment, 650 municipalities have done the same thing, there's hundreds of organizations working on it and over five million people have signed petitions. The Stampede is just one small part of that.

With so many people behind it, Cohen believes we could see a constitutional amendment on campaign finance within the next 10 years.

Cohen argued it's a no-brainer, and Millennials, especially, should focus on this issue, stating:

The root causes of most of the problems Millennials and everyone else are concerned about: ridiculously high student debt, failure to pass decent environmental regulations, failure to have decent energy policy, the Wall Street banks screwing everybody… they're all rooted in rich people and corporations buying off Congress. The people with the money and big corporations want policies that support their aims and don't care about screwing everyone else. And they get what they pay for. Personally, I think the only hope for our democracy is to get money out of politics, and I would suggest that young people work on that.

Cohen, and others like him, want to restore trust in a system many feel is broken. In his opinion, the first step toward fixing it and reestablishing faith in the political process is ensuring we eliminate money's excessive role and influence.

I think this is the gateway issue for all that's wrong with our country. If we don't do anything about it, we may as well turn over our keys to democracy to the corporations and just admit we're going to be pawns.

Campaign finance reform has already proven to be a major issue in the early stages of the 2016 presidential race. Hillary Clinton, for example, has stated she'd support a constitutional amendment.

It's also no secret Senator Bernie Sanders has placed this matter at the forefront of his agenda. For that reason, among others, Cohen said,

As an individual, I personally support Bernie Sanders. I'm proud that he's from our state [Vermont]. In terms of the issues that you're saying Millennials care about, he's the man, and he's not doing it because of what he's read in the polls. He's the real thing.

But Cohen remained adamant that Stamp Stampede is nonpartisan, and the organization supports any candidate pushing for substantive campaign finance reform.

Cohen ended the conversation in a fashion as exuberant as the various names of his world-famous ice cream:

Go to Stamp Stampede, get yourself a stamp and stamp your head off, your balls off or your butt off. Stamp off anything you want, but keep on stamping.

Perhaps changing things really could be as simple as stamping money, at least as a first step. It's certainly worth a shot.

If you want to learn more about Ben Cohen and Stamp Stampede, visit http://www.stampstampede.org/.