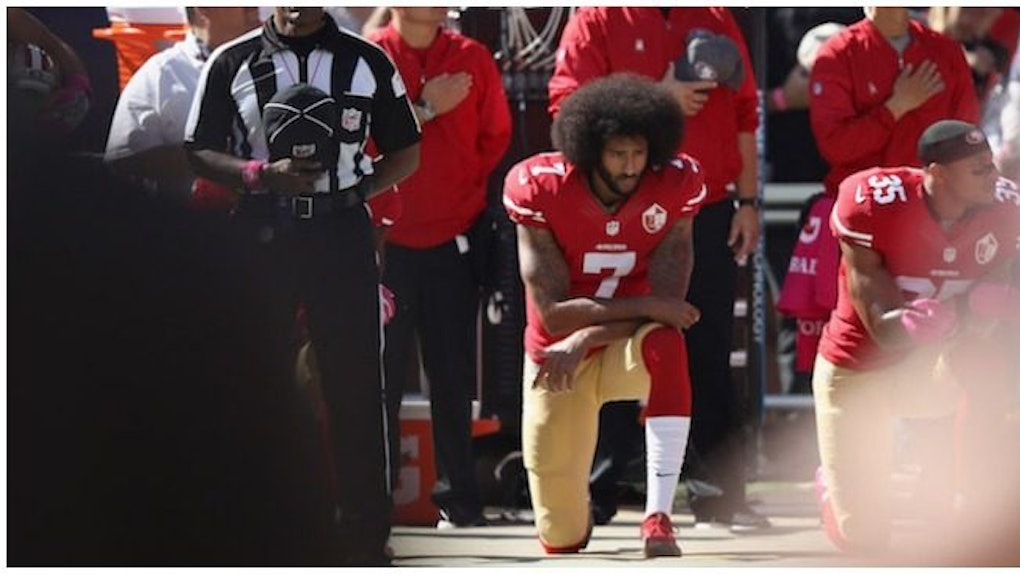 Why Does The NFL Play The National Anthem? It’s Not All About Patriotism

Despite the fact that Puerto Rico was hit by a brutal hurricane on Sept. 20 and plunged into a humanitarian crisis of massive proportions, President Donald Trump has spent most of his emotional energy for the past week furiously tweeting about NFL players kneeling during the national anthem. It's a matter of respect for "our Country, Flag, and National Anthem," he tweeted.  But why does the NFL play the National Anthem before every game, anyways? What do professional sports have to do with patriotism? Is protesting really disrespectful?

Well, the intersection between football and displays of patriotism isn't as cut and dry as many people think. In fact, the history of the national anthem and the NFL -- especially its players -- is, well, complicated.

Players standing for the anthem is not the long-standing tradition we think it is.

As far back as the late 1800s, there were instances of the national anthem being played at baseball games -- decades before the Francis Scott Key song even became the United States' national tune.

Time reports that a sea change began during the 1918 World Series, when the crowd was "so moved" by the song -- at the time, the anthem for the U.S. Army and Navy -- that it was something of a watershed moment for patriotic displays in American sports, but these displays still remained reserved for special occasions.

But around WWII, the country was swept up in a wave of patriotism thanks to the war effort. At the same time, according to CNN, new technology enabled stadiums to play recordings over a speaker system, allowing teams to play the anthem regularly (previously, a stadium would have had to spend money on a live band). The combination of war-fueled patriotism and new technology opened the door to the modern-day intertwining of sports and displays of patriotism.

After the war ended, then-NFL commissioner Elmer Layden argued to keep the anthem as a game-day tradition. "The playing of the national anthem should be as much a part of every game as the kickoff," he said. "We must not drop it simply because the war is over. We should never forget what it stands for."

So we know that the national anthem has been part of the NFL for around 70 years. But that's not the whole story.

Until recently, NFL players themselves traditionally stayed in their locker rooms during the song, save for the Superbowl and after 9/11.

The NFL's game operations manual states, "The National Anthem must be played prior to every NFL game, and all players must be on the sideline for the National Anthem." But, according to Snopes, players weren't required to be on the field for the anthem until 2009, making this "long-standing tradition" only eight years old, a drop in the bucket compared to the long history of the NFL itself.

So while the national anthem is a long-standing tradition for fans, for players, standing on the field for the song is a relatively new phenomenon.

And while the operations manual states that players must be on the sideline, the NFL itself says there's no requirement to stand. After the initial protest caused an uproar in the summer of 2016, the league said in a statement, “Players are encouraged but not required to stand during the playing of the national anthem.”

How did this all begin?

In August 2016, former San Francisco 49ers quarterback Colin Kaepernick made national headlines for kneeling during the national anthem at a pre-season game to protest racially biased policing and police brutality.

In a post-game interview on Aug. 26, 2016, Kaepernick told a reporter with NFL Media, "I am not going to stand up to show pride in a flag for a country that oppresses black people and people of color," Kaepernick said. "To me, this is bigger than football and it would be selfish on my part to look the other way. There are bodies in the street and people getting paid leave and getting away with murder."

Despite Kaepernick's explanations, there was an enormous backlash, with his detractors saying that he was disrespecting the flag, the country, the anthem, servicemen and -women, and a longstanding tradition of players standing for the anthem.

The 49ers released a statement reiterating Kaepernick's right to kneel: “In respecting such American principles as freedom of religion and freedom of expression, we recognize the right of an individual to choose to participate, or not, in our celebration of the national anthem,” the team said.

But the backlash was so severe that, despite being one of the most talented quarterbacks in the league, after leaving the 49ers in March 2017, he still hasn't been picked up by a new team.

So what's going on now?

Though Kaepernick started this movement, it's become bigger than him. It's an ongoing protest against police brutality, the disproportionate killing of people of color by American police, and racial injustice. He wasn't the only player to kneel last season, though it was much less pronounced, with only a handful of players joining the protest. This year, hundreds have taken the knee.

And despite Trump's vitriolic comments at a Sept. 22 political rally and subsequent tweets, it's important to remember that, while protesting Trump's horrifying willingness to single out private citizens exercising their right to protest is a worthy cause, #TakeAKnee is about people of color, not Trump.

And it's definitely not about the national anthem.