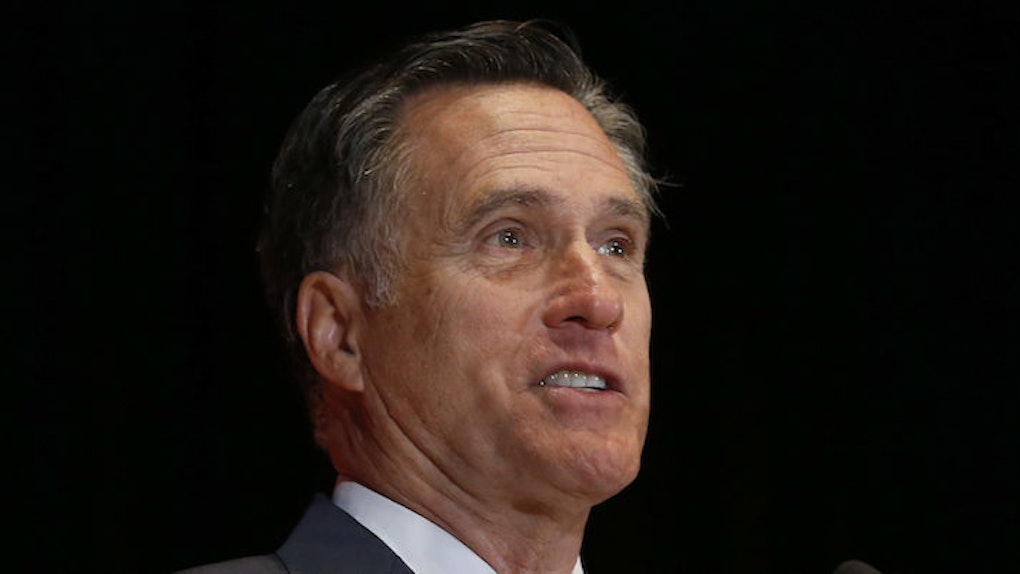 The Republican establishment is pretty desperate to derail Trump's seemingly unstoppable presidential campaign, and now it's bringing out the big guns.

If you didn't catch it, Romney basically said Trump is a dangerous liar who would burn the US to the ground, and anyone who votes for him is an idiot. Actually, the exact word the former Massachusetts governor employed to describe Trump voters was "suckers."

For those hoping Romney would announce he's going to save the GOP from Trump, we're sorry to disappoint you, but that's not going to happen.

Regardless, this was a fairly unprecedented event. We just witnessed a major figure in the Republican party skewer the GOP frontrunner.

It's evident Trump has created complete disarray for Republicans, and they really have no idea what to do about him.

Other than John Oliver's exceptional takedown of Trump this past Sunday, Romney's speech was perhaps the most critical public bashing of Trump we've seen. And Trump was definitely not happy about it; he took to Twitter to deliver his typical slew of insults against anyone who challenges him.

Still, it almost seems as if the more criticism Trump receives, the more support he gets, and it's difficult to believe Romney's statements will drastically change the course of this election. This wasn't exactly too little, but it may have been too late.

With that said, Romney definitely had some great one-liners and made some important points about Trump.

Here are 11 of the best one-liners and strongest points from Romney's speech explaining why Donald Trump sucks (a lot).

1. Romney unequivocally dismissed the idea Trump is a successful businessman.

2. Romney, a successful businessman himself, said Trump doesn't know what he's talking about when it comes to business.

3. Romney did what Trump really hates: reminded people of his business failings.

4. Romney described Trump and his policy proposals as "reckless."

6. Romney said Trump is, at his core, a habitual liar.

7. He made it clear he believes Trump is completely delusional.

8. Romney essentially described Trump as an overgrown child (but using those exact words would be insulting to children).

Indeed, it's clear Mr. Romney does not want you to vote for Trump.