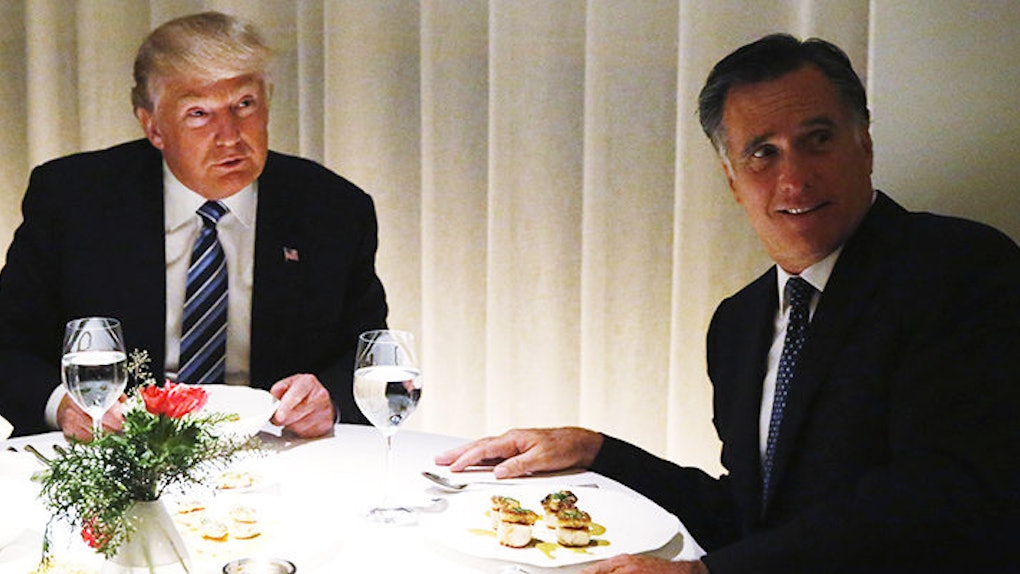 Mitt Romney's Doing The Right Thing By Playing To Trump

Don't get me wrong: The Mitt Romney jokes are really, really funny.

I mean, I may have chosen to resist piling on a man who's trying to serve his country despite disliking his potential boss, but I know hilarity when I see it.

And let me tell you this: The Romney memes – particularly the ones from his Tuesday night dinner with President-elect Trump – are genuinely hilarious.

As a Twitter connoisseur, I have to give credit where it's due: This is A-plus work.

And you know what? I'll throw in another admission: Romney does look like a fool for becoming the subject of Trump's courtship. There is really no way around that hard truth.

Just consider his words yesterday after he dined with Trump and future White House chief of staff, Reince Priebus.

What I've seen through these discussions I've had with President-elect Trump, as well as what we've seen in his speech at the night of his victory — as well as the people he's selected as part of his transition — all of those things combined give me increasing hope that President-elect Trump is the very man who can lead us to that better future.

Meanwhile, here's what the former Massachusetts governor had to say about Trump back in March:

Here's what I know: Donald Trump is a phony, a fraud. His promises are as worthless as a degree from Trump University. He's playing members of the American public for suckers: He gets a free ride to the White House, and all we get is a lousy hat.

Like I said, changing one's tune in such a dramatic way and in such a short period of time will make anyone look like a fool.

I get it. But there's a difference between looking like a fool and acting like one, and I refuse to bash Romney for the latter.

In fact, I'm more inclined to give him props for doing the right thing.

Yes, Romney criticized Donald Trump more aggressively than some of Trump's actual opponents. But things have changed now: Trump is the president-elect of the United States, and it's time to focus on where we're at right now.

We are currently at the point where any one of Trump's hires could be truly dangerous: Just consider the appointment of Steve Bannon as White House chief strategist.

Even from a conservative writer – who is clearly reluctant to call Bannon an out-right racist – the description of Trump's chief strategist is concerning... to say the least.

Ben Shapiro, who used to work under Bannon at Breitbart News, wrote this month,

The alt-right, in a nutshell, believes that Western culture is inseparable from European ethnicity. I have no evidence Bannon believes that personally. But he's happy to pander to those people and make common cause with them in order to transform conservatism into European far-right nationalist populism. That means that the alt-right will cheer Bannon along as he marbles Trump's speeches with talk of 'globalism' – and that Bannon won't be pushing Trump to dump the racists and anti-Semites who support Trump anytime soon.

On the other hand, you have Romney, who by all accounts is a sensible politician. And while you might argue that being "sensible" should be the bare minimum, the fact is that it hasn't been for all of the president-elect's appointees.

Once Romney got the call that he could be Secretary of State, he had the choice to make a change either from within Trump's cabinet or outside of it.

And since he's chosen the former, I'm more inclined to call him courageous, rather than a coward.

Now, if Romney ends up dramatically changing his style as a result of this alliance with Trump, we'll have something to talk about.

Until then, though, I won't be making any jokes at Romney's expense.