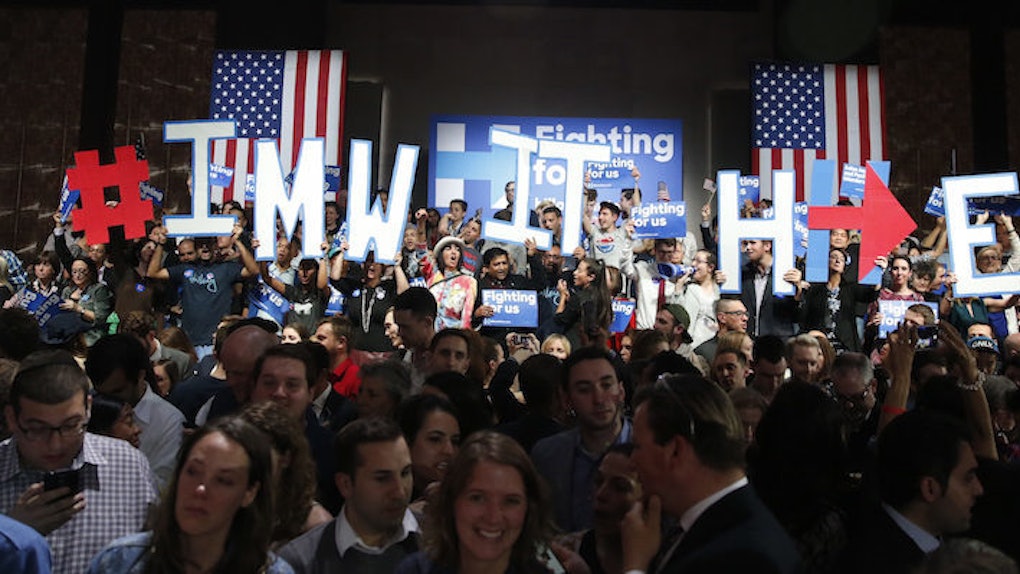 Why Some Millennials Are Going Against Their Generation And Voting Hillary

One of the biggest narratives surrounding the 2016 presidential election is that Millennials don't like Hillary Clinton. While it's true Bernie Sanders has dominated among young voters throughout the primary season thus far, it doesn't mean Clinton doesn't have any youthful supporters whatsoever.

While the number of Millennial supporters I've seen at Sanders rallies have definitely been larger, there were still a fair amount of young people attending the party.

It was admittedly difficult to get some of them to speak with me (they're a shy bunch), but I was able to corner two of them just before Hillary came out to deliver her victory speech (she won the New York Democratic primary, defeating Senator Bernie Sanders).

I asked them what they found appealing about Clinton, and why they prefer her over Sanders, given so many of their peers are seemingly more enthusiastic about his campaign.

The first young supporter I spoke to was a 25-year-old named Travis from Chicago. He said,

I've been a Hillary supporter since 2008, and I admire her tenacity, strength and resilience. If you look at her career, she's always supported policies helping those who are underserved. And I think she has the knowledge and political savvy to lead an effective government.

I'm supporting [Hillary Clinton] because I think she's the person for the job. I think what's interesting about not only young people but a lot of Democrats is that a lot of us Hillary supporters like Bernie and agree with a lot of the things he advocates for -- I'll speak for myself, I do. But I believe that, given the political climate and the realities of what this country looks like, a lot of the things he's campaigning for and wants to achieve are frankly unachievable. And I think I identify with the liberal values [Hillary] advocates for as well and I think her pragmatism, incrementalism and experience will make a liberal agenda more achievable. I think she'll actually be able to do a lot of the things he wants to do quicker and more effectively.

There's a lot of animosity between the Clinton and Sanders campaigns at the moment. When I asked Nicole whether or not she's felt ostracized or isolated as a young Hillary supporter, she said,

I have a lot of friends who are Hillary supporters... I know some Bernie supporters and we have great debates... It's nice cause we all fundamentally believe in the same things. So, no, I do not feel ostracized.

Travis added that Millennials are a very passionate generation, which helps explain why those supporting either candidate might seem particularly entrenched.

Both of their comments inspire hope that no matter who wins the Democratic nomination, Millennials, the largest voting demographic in the country, will be able to overcome their differences and move forward in a positive manner.