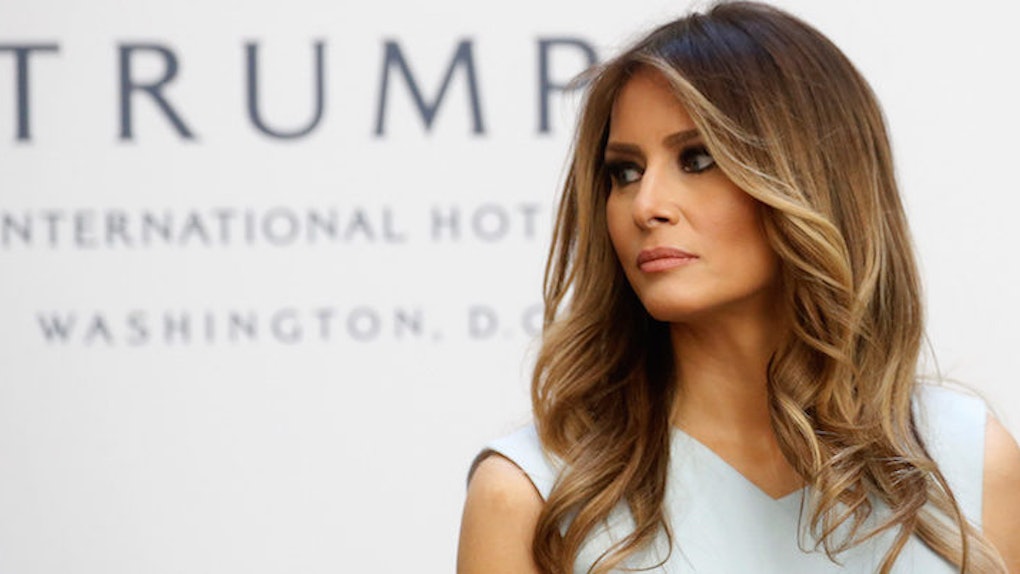 It turns out the wife of a presidential candidate who wants to deport millions of undocumented immigrants worked in the US illegally.

According to AP, Melania Trump was paid $20,056 for 10 modeling jobs in the US over the course of seven weeks — before she had legal permission to work in the country.

This was discovered via detailed accounting ledgers, contracts and related documents from 20 years ago provided to AP.

Back in August, Melania's immigration story was called into question by Politico after the New York Post published images from a nude photo shoot she participated in back in the '90s.

Politico initially reported the photo shoot occurred in 1995, which would've been before Melania became a citizen.

Eventually, however, it was revealed the shoot actually took place in 1997, so Politico ended up issuing a correction on its original story.

In the process, it provided the date of Melania's arrival in the US. She came to the US in August 1996 and obtained a work visa in October 1996.

But, based on this new report from AP, Melania worked illegally between the time she arrived and the time she obtained a work visa.

In August, when her immigration story was questioned, Melania issued a statement in which she claimed,

I have at all times been in full compliance with the immigration laws of this country.

It now looks like she wasn't being entirely honest.

Melania obtained her green card in March 2001 and became a citizen in 2006 after she married Donald Trump.

Given she lied during the naturalization process, the US government could revoke Melania's US citizenship.

But according to AP, this is unlikely to happen and only occurs in the "most egregious cases," such as those involving terrorism or war crimes.

Still, this is fairly embarrassing for the Trump campaign, which has focused heavily on undocumented immigration throughout the election cycle.

When Donald Trump announced he was running for president, he referred to undocumented immigrants from Mexico as “drug dealers,” “rapists,” “killers” and “murderers.”

The Republican presidential nominee's plan to address immigration involves deporting around 5 million undocumented immigrants, as well as building a wall along the US-Mexico border.

Trump claims Mexico will pay for his wall, but Mexican President Enrique Peña Nieto is not too fond of that idea.

It's hard to say how much this story will hurt Trump's campaign, given the numerous other scandals it's overcome and continues to deal with. In other words, this could get lost in the shuffle.

But it's definitely pretty ironic, given Trump's extreme approach to immigration.