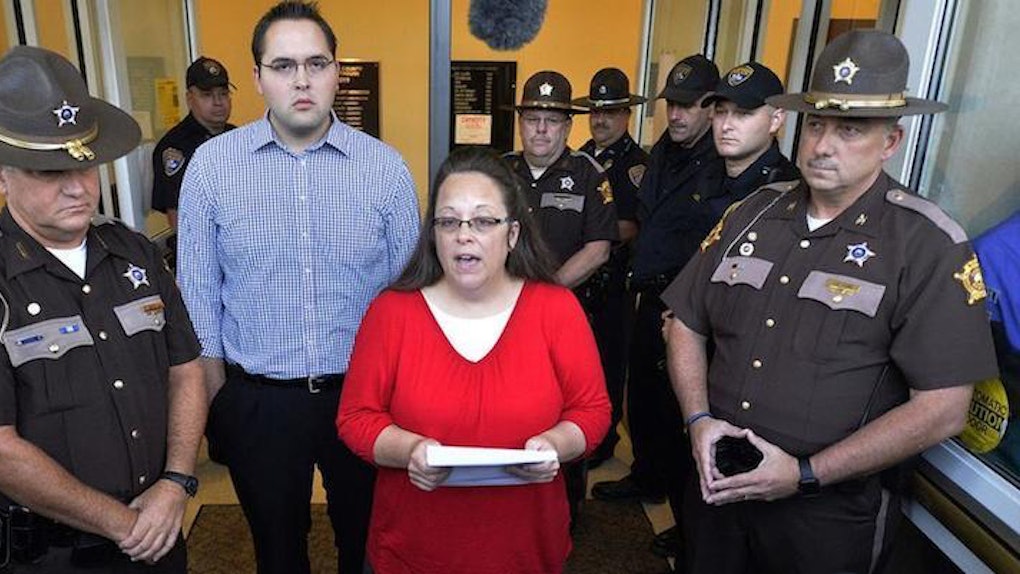 Kim Davis became an infamous name in the US in recent weeks due to her obstinance surrounding the issue of same-sex marriage.

The Kentucky clerk was recently jailed and subsequently released for denying marriage licenses to gay couples in Rowan County.

On Monday, she reportedly announced she would not block her deputies from issuing marriage licenses to same-sex couples, even as she continues to refuse to do so, The Washington Post reports. A gay couple was issued a license for the first time while Davis was present.

Davis, an Apostolic Christian, objects to same-sex marriage on religious grounds. She feels issuing marriage licenses to gay couples would be a violation of her beliefs.

A federal court, an appeals court and the Supreme Court disagreed with her, but she continued to act defiantly.

This resulted in Davis being thrown in jail after a federal judge found her in contempt of court. After five nights in jail, she was released under the condition she would not interfere with deputies issuing marriage licenses.

As The Washington Post notes, it is unclear if she is actually adhering to this order. The marriage licenses being issued reportedly say they are issued in accordance with a court order and don't display Davis' name or title.

Kim Davis presented the first widely publicized obstacle to the Supreme Court's decision to legalize same-sex marriage nationwide back in June. Her own dubious past, as well as her interpretation of the Bible, resulted in her being labeled a hypocrite.

A billboard recently popped up in her hometown that reinforces this position.

This billboard is about to give Kim Davis a BIG surprise in her hometown http://t.co/NHN0cD6FP5 pic.twitter.com/IeZtR0bBi0 — JamesMichael Nichols (@jamesnichols) September 11, 2015

While many feel she has fundamentally misunderstood and distorted the notion of religious freedom, she also has vocal supporters.

Regardless, the law worked against her, and it seems her objections, while incendiary, will ultimately be in vain.