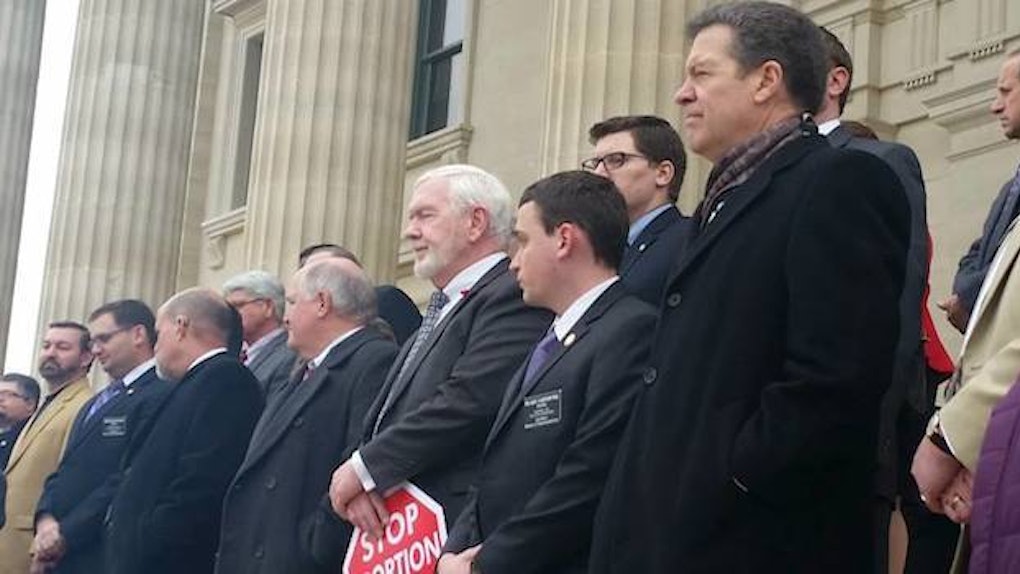 The relentless push to further restrict abortion throughout the 50 states is gaining more ground now than it has in recent memory.

It was the first state in the country to do so. On Tuesday, Republican Governor Sam Brownback signed it into law.

As Kansas moves forward with anti-abortion legislation, so too does Alabama. The state's legislature is now considering a ban on abortions taking place after the baby's heartbeat is audible.

New laws in Arizona and Arkansas were also put into place this month. These laws require doctors to tell women pursuing drug-induced abortions they can change their minds, mid-procedure. (As if making the decision and committing to it wasn't hard enough for women already).

And now, the icing on the cake: Just after Brownback approved Kansas' bill, the Oklahoma state legislature passed an almost identical bill banning the same procedure.

Oklahoma's governor, Republican Mary Fallin, has not confirmed she will approve the bill, but she has made her anti-abortion sentiments clear in the past, noting,

I have always been pro-life, and I am glad that the pendulum is finally swinging back to common sense on this vital issue. More and more Americans are coming to realize that a society that fails to protect the most vulnerable is not a healthy society at all. I support efforts in our state legislature and in Congress to prohibit partial birth abortion and to require parental notification when minors seek abortions. I am hopeful that one day soon the courts will re-examine and reverse Roe v. Wade.

In Oklahoma, we recognize that families, not federal agencies, are the building blocks of society. We believe in the right to life, and we believe the unborn have an equal claim to that right as the born.

The end goal of this trend is, of course, an outright ban on abortion.

Undeniably, abortion opponents have made strides in recent weeks, through politically-savvy and clever wordplay.

In Kansas, they labeled the second-trimester procedure in question a “dismemberment abortion,” and used graphic, un-scientific language to describe the pregnancy termination process.

The law they created refrains from using medical terms, instead favoring emotional and impactful language to elicit a strong response from, frankly, anyone listening.

It describes how the abortion procedure, medically known as dilation and evacuation, “knowingly dismembers a living unborn child and extracts such unborn child one piece at a time from the uterus.”

This decidedly graphic language was crafted by an organization called the National Right to Life Committee, which has been criticized for creating a bill focused more on eliciting an impassioned response than describing facts.

Regardless of the bill's language, and Kansas' sympathetic response, this is a concerning moment for anyone supporting women's rights.

In banning the procedure, Kansas and any state following suit -- such as Missouri and South Carolina -- is poised to make second-trimester abortions much more dangerous.

Second-trimester abortions are not as straightforward as more common, first-trimester procedures. If the dilation and evacuation method is rendered unavailable, patients will have to resort to options medical professionals seem to agree are riskier.

One second-trimester alternative is a medically-induced, nonsurgical abortion, which “can be dangerous for some women, involve days of uncertain waiting, and may require access to hospital facilities,” according to Kathleen Morrell, a New York gynecologist and obstetrician quoted by The New York Times.

Other alternative methods, such as use of the heart drug digoxin, may produce complications.

In other words, gynecologists and doctors are concerned.

The bill Kansas passed, from a medical perspective, serves as an impediment to the safety of any woman undergoing an abortion. To make matters worse, Kansas' bill makes no exceptions for women who are pregnant by rape or incest; it only allows for the procedure to take place if it will save a woman's life.

Kansas' decision to pass the bill, and the inspiration this has given to lawmakers in states like Oklahoma, jeopardizes women's safety in other ways as well.

Planned Parenthood spokesperson Eric Ferrero spoke in a 2012 New Republic article about the increase in dangerous, do-it-yourself abortions in Idaho as a result of anti-abortion legislation.

The good news is, there's hope despite the setbacks for pro-choice advocates. In 2013, a federal court struck down an Idaho law banning abortions after 20 weeks, on grounds it was unconstitutional. A pro-choice precedent was set.

Physician and lawyer Richard Hearn told The Los Angeles Times the court's ruling “establishe[d] a strong argument for lawyers and women in all of the other states where there are such laws restricting abortion rights prior to viability, which is about 24 weeks.”

So now we look to The Supreme Court, where many of the abortion laws we're discussing might one day be held up against precedent and the Constitution.

Until then, the National Right to Life Committee hopes to take their legislation to more states, encroaching further on a woman's ability to actually have a choice about her body.