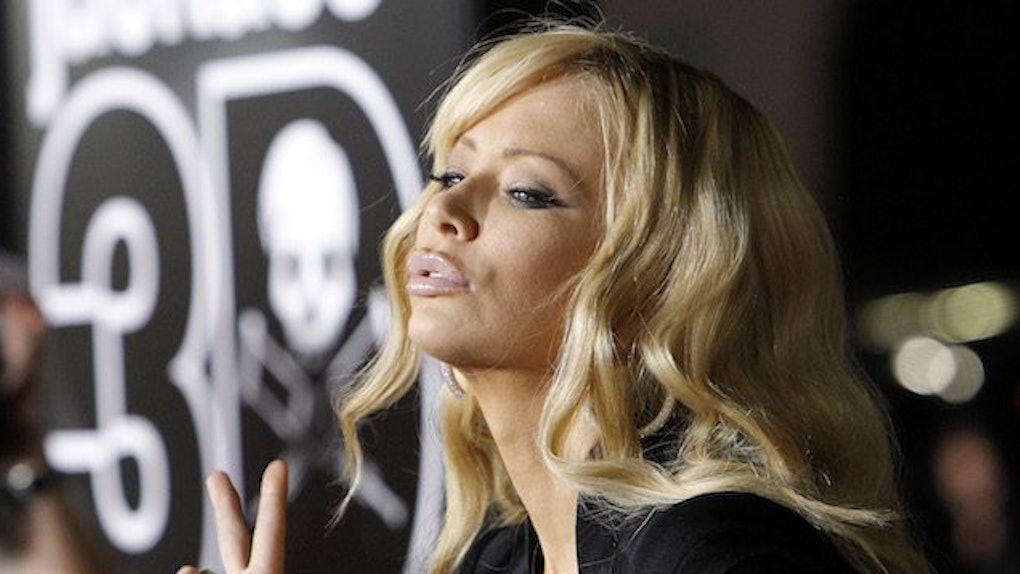 Jenna Jameson, who is probably the world's most famous ex-porn star, has some pretty controversial political views.

Somehow, she's evolved into an unofficial spokeswoman for the alt-right (neo-Nazis).

Over the past few days, she's tweeted in support of the KKK, Milo Yiannopoulos and made it abundantly clear she's an unapologetic Islamophobe, and it has left a lot of people speechless.

Here's what she said that left the internet dumbfounded:

After Sweden became a hot topic (because President Trump essentially made up a terror attack), Jameson started tweeting about it.

She said the country had become the "rape capital of the world" (it's not) in relation to the number of refugees and immigrants it's accepted.

In fact, while many have argued the influx of refugees in Sweden has led to rampant crime, the overall crime rate there has actually declined since 2005.

And, according to the Swedish National Council for Crime Prevention, the number of rapes declined 12 percent between 2014 and 2015.

So, the numbers do not back up Jameson's claims, which are similar to assertions made by President Trump and the British politician Nigel Farage.

The US is actually far more violent than Sweden, and way behind it on a number of levels.

In addition to her unfounded Sweden rants, Jameson also tweeted in support of Milo Yiannopoulos.

Yiannopoulos, if you aren't familiar with him, is an infamous alt-right troll who is best known for attacking immigrants, Muslims and transgender people, who recently inspired outrage when he condoned pedophilia.

And in tweets against Muslims, Jameson appeared to defend the KKK.

Jameson ignored the KKK's long history of lynching and murder in order to demonize an entire religion.

There are roughly 1.7 billion Muslims worldwide. The vast majority are peaceful.

Jameson says she doesn't "hate" Muslims, but, let's not get it twisted, maligning an entire religion is inherently discriminatory.

Her thoughts on Islam lack nuance and are simply not true. Take her claims on Islam and homophobia, for example.

Is much of the Muslim world behind gay rights? Yes, there is a case to be made for this.

At the same time, there is a case to be made that religion still plays far too great a role in American politics, which helps explain why many in this country still oppose same-sex marriage, transgender rights and reproductive rights.

Not all Muslims are homophobes, however, and gay Muslims do exist. Many are very vocal and not shy about fighting for their rights.

Islam doesn't have a monopoly on homophobia or misogyny, as Jameson seems to assume.

Plenty of Christians and Jews, among others, vehemently oppose gay rights and women's rights, including many in the Trump administration, such as Vice President Mike Pence.

People of all faiths and backgrounds continue to inflict violence upon women on a daily basis while also exhibiting discriminatory sentiments toward the LGBTQ+ community.

Like far too many, Jameson has made the mistake of painting an entire group of people with the same brush.