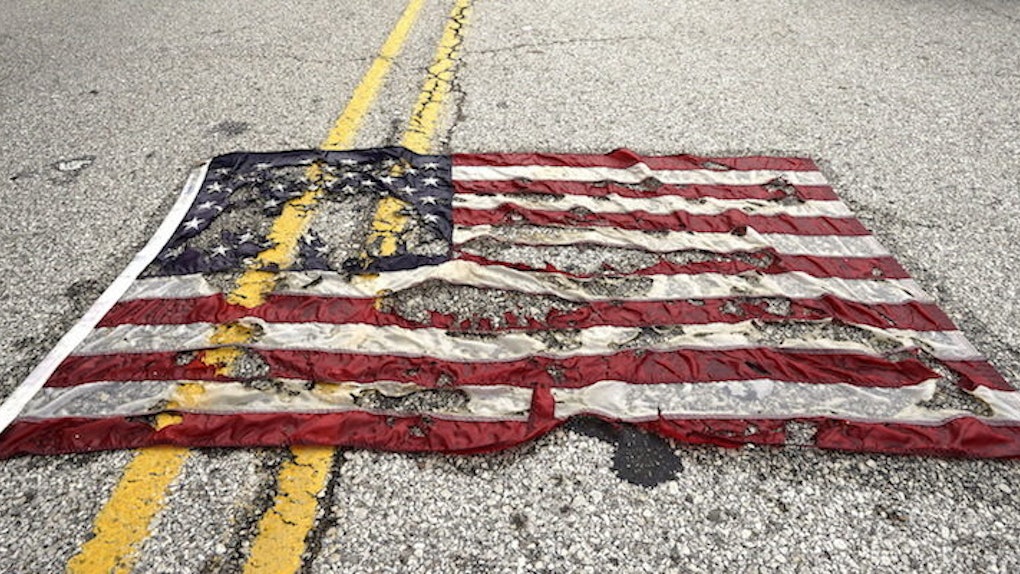 Disclaimer: Everything that follows (including my assessment of the movie "Bad Boys II") is the sole opinion of this author and not of Elite Daily as a whole.

Although to be fair, if I ever discover that Elite Daily does not like "Bad Boys II" as much as I do, I will immediately terminate my tenure with this company and find a job at an organization that more closely aligns with my worldview.

So, yeah, I hate this country.

I'm sorry, guys, but it's time we just admit it. This just isn't a very good country.

And, really, it has never been.

If countries were sandwiches, Switzerland would be like a ham and cheese on Wonderbread, and America would be like the one I just ate, eight hours from now.

Now, the obvious counter-argument to my proclamation that this is a garbage country that has been, for centuries, bursting at the seams with incalculable pain, self-hatred and the near-constant jonesing for the fleeting anesthetizing rush of sadism, is this single sentence:

"But, Alec, America has made and accomplished so many incredible things!"

This is, of course, true.

And yes, during the 20th century and the beginning of this one, this country has indeed seismically transformed the world through our art, technology and ideals (for better or worse).

But, in truth, our finest achievement, and the actual reason why we are able to keep telling ourselves this country is, essentially, sacred, is simply that America is rich.

I don't think we realize how contingent this nation's self-image is on economic power — and not its ideals (which shift year to year to suit that fiscal hunger).

And we only got rich because every other developed country fought the most deadly war in history on their own soil for five years while borrowing money from us (World War II).

Literally millions of people had to die and entire continents become destabilized for the United States to take its place as the richest country in the world.

And yet, in just 70 years, money and power have tricked us all into believing this nation is holy in some way and made us unwilling to question our past choices (as they are, presumably, what got us here).

Economic dominance has led us to believe we have some sort of ultimate destiny — that this country has all the raw materials to become a utopia, and, if only we wait long enough and remain faithful enough, we will live to witness that shimmering haven of peace and prosperity.

And it's dog shit.

We treat the founding fathers like they're apostles who were given a sacred text by God himself, even though we all know they owned literal human slaves and occasionally, when one made fun of the other, DUELED EACH OTHER TO THE FUCKING DEATH.

Guys, seriously, do you even realize how nuts that is?

Alexander Hamilton was SHOT TO DEATH IN AN OFFICIAL DUEL HE AGREED TO.

NO ONE WENT TO PRISON.

And yet, for centuries, we've been like, "Yeah, those guys knew what was up. Let's do whatever they thought was a good idea."

I mean, guys, Thomas Jefferson (whom we regard with the sort of panting deference usually reserved for "your cool older cousin who can do a wheelie") had sex with one of his slaves.

Seriously, her name was Sally Hemings. Sally Hemings was his slave. And Thomas Jefferson had sex with her. She was, by definition, a sex slave.

So yeah, Thomas Jefferson, principal author of the Declaration of Independence and third president of the United States of America was, in no uncertain terms, um, a rapist.

Did Thomas Jefferson also have some really good ideas about stuff? Yes. Amazing ideas. The best. But, guys, it's time to let him go.

In my opinion, this whole deferential-to-the-past mindset probably stems from the fact America is, in its marrow, a Christian nation.

So, you know, refusing to question a document that was written a really long time ago by a bunch of different men comes pretty naturally to us as a collective.

But honestly, I don't entirely care why we worship our nation as unquestioningly as we do. All I care about is we stop it.

For one, studies show that from a third to a fourth of black men will go to prison at some point in their lives. In fact, America has more prisoners than any other country in the world. Yes, more than China.

And, as The Huffington Post points out, the number of black men in prison in this country is higher than the total prison populations "in India, Argentina, Canada, Lebanon, Japan, Germany, Finland, Israel and England combined."

Calling the United States the "land of the free" is like calling Chipotle the "land of easy, stress-free bowel movements."

Second of all, a lot of other countries protect freedom of speech, religion, etc. And they protect women's reproductive rights, orientation and gender rights far better than we do.

Third of all, even if America is responsible for greatness ("popularizing democratic governance" would definitely be a good contender — France did an ass job of that, after all) the fact of the matter remains: The cons here vastly outweigh the pros.

After all, just because a man is a great dancer and a successful businessman does not change the fact he is a monster for beating his children.

Of course, all countries are pretty fundamentally flawed — so, yes, we should grade them on a curve. But, even so, America has been getting low Ds for centuries.

Don't believe me? OK, I will just list some examples at random.

I mean, seriously, just for a second, look at the facts with an open mind. Do these sound like the attributes of a country that is or ever was "the best"?

Women. You know, 51 percent of the population. We didn't let them have a say in politics, at all, until 1920. Your grandma was born around then, probably. People alive today can remember when that was the case.

Also, if you were married to one, it was legal to rape them in many states as recently as the '80s (as mentioned by Donald Trump's own lawyer when asked about Trump's ex-wife accusation of sexual assault against the President-elect).

2. We were one of the last countries to outlaw slavery.

3. Our justice system is basically a piece of IKEA furniture we assembled without instructions and then spent 250 years building a house on top of with duct tape and gum.

4. We destabilized and armed the Middle East (with Russia's help) during the Cold War.

The effects of which have caused us to keep bombing (and being bombed by) the people who live there ever since.

5. We are one of the only first-world countries that has never elected a female leader.

For reference, Turkey has had a female leader. We couldn't even beat Turkey. (No offense, Turkey.)

6. We rank 14th in the world in educational performance, and, according to a new study Americans are 10 times more likely to be killed by a gun than people in any other developed nation.

7. As of August 2016, 24 million people in this country live without healthcare, which is something you really need if you want to, for example, stay healthy and/or not die from a curable illness.

8. We're the only country to use nuclear warheads, and we used them on two civilian cities.

9. Out of all the wars we've been in, the war we fought against ourselves — not that long ago — took the most American lives.

Yeah, the Civil War saw 498,000 military deaths. That's nearly a hundred thousand more dead American soldiers than World War II and nearly a hundred times more than the Revolutionary War. I mean, guys, it's no wonder this country is still split in two.

I could go on, but this is sucking the life out of me, and I would like to finish this piece before Trump starts his second term in office.

Do you really think there are not other countries that aren't objectively "better"?

Sure, lots of countries have their problems, but our problems make the problems of, say, Sweden look like a UTI.

In this metaphor, America has testicular gangrene. (Don't google that. You'll regret it.)

OK, so what's the point of this article? Is it just to shit on America for 1,776 words?

But what I'm actually trying to get at here is something I realized during this most recent election campaign: So many Americans can't help but assume America, even though it has "its problems," is simply better and more evolved than everywhere else when, objectively, there is really no evidence to support it.

The way we do things, and the way we've done things, are not the only ways. And even if our past got us this far, it does not mean it can get us much further.

Look, to tell you the truth, writing this article is making me feel pretty uncomfortable.

Saying I "hate" this country, that I think it is a "bad" place... it makes me feel weird. After all, this is my country. I carry it with me. It permeates my personality, my worldview, my system of ethics. So, yeah, I'd like it to be the "best" or at least I'd like to believe it could be.

And on most days, by reflex, I even do.

But if this election has taught me anything, it's that blind pride gets us nowhere.

And patriotism isn't a synonym for denial.

And the first step in crawling out of a shithole is not to say "this is the best hole."

Because we will not always be rich.