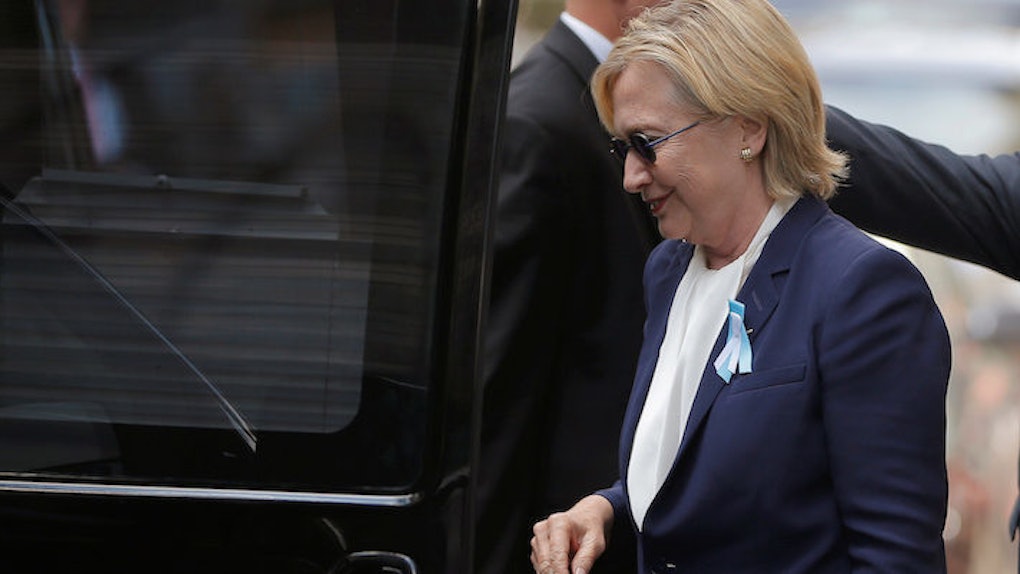 Hillary's Privacy Costs Her Millennial Voters, But She Has Reason Not To Change

She doesn't want to keep the press close. But by keeping them away, she creates room for speculation, which then demands more press to clear up that speculation while simultaneously making her more suspicious of the press.

This isn't helping her case with young people, who remain largely unenthusiastic about her campaign.

Millennials want to hear from Clinton, and by not speaking out, she's arguably hurting her campaign with our generation. But at the end of the day, how much does that matter?

Clinton has been in the national political spotlight for as long as I have been alive.

That isn't necessarily a good thing.

I was shocked when my dad told me he started seeing solicitations to campaign against Clinton in the late '90s — before she was running for office and before I was old enough to actually understand the Monica Lewinsky scandal.

In other words, the case against Clinton has been under construction for as long as I — and the rest of my generation — have been old enough to know who the president is.

That was the first election most Millennials either voted in or fully paid attention to as teenagers. It set a high precedent.

Obama was cute, young, charming, inspiring. He was also fresh. For young people just tuning into politics, he didn't have any real political history to criticize.

In some ways, Bernie Sanders was like that, too. I didn't know about him until a couple months before the election kicked off. I spent much of the early parts of the race simply learning about him.

And there he was with big speeches and lofty ideas of hope and change — screw the policy specifics.

But Clinton is here with a lengthy history.

As I said, she's been a major political figure for as long as I've been alive. If that doesn't scream "establishment," I don't know what does.

We've grown up with a dysfunctional government that threw us into wars before we even had a vote. The "establishment" isn't our favorite thing.

Clinton has widely known sins to atone for. Her views on same-sex marriage, abortion and criminal justice may have evolved, as she calls it, at the same pace as the Democratic platform, but we need to know that she's serious about those changes of heart.

We still need to know we can trust her, because people have been telling us our whole lives we shouldn't.

At some point in the past week, Clinton was diagnosed with pneumonia.

She didn't disclose this information until after she had to abruptly leave a 9/11 memorial event, stumbling as she made her way into a car.

You can see the logic in her not disclosing the information earlier. The pneumonia had terrible timing. Donald Trump has been stirring speculation about Clinton's health.

Had she come out and said she was sick, it would've fallen right into his "too sick to serve" trap.

So Clinton tried to forge on. And when news hit Twitter that she left the memorial, we didn't have any information because her campaign has famously been tight-lipped. It took them hours to announce the diagnosis.

For the few hours between the Twitter video and the announcement, I — as well as the Millennial friends I spent NFL Sunday with — started wondering if Trump's theory was right.

What was I supposed to think? I didn't have any other information.

When you lack information, you start making it up yourself.

Your brain wants to bridge together whatever information is available. And when all my brain had to go on was "she collapsed and was rushed into hiding," it crept closer to this conclusion: Oh, my God, Trump was right.

Trump has been using that connective process to aid his conspiracy theories. Prefacing speculative statements with phrases like "many people are saying" and "I don't know, but" are ways of saying, "I'm not saying it, but maybe you should think about the clues I'm dropping." These phrases are what creates conspiracies — like the one saying Obama wasn't born in the United States or that Clinton supports ISIS.

My speculation on Clinton's health on Sunday morning could have been avoided if the campaign provided information earlier.

We still need to know we can trust her, because people have been telling us our whole lives we shouldn't.

The speculation was also not helped by Clinton's lack of a protective press pool — a group of reporters who closely follow a candidate, kept within the Secret Service's motorcade of protection.

Trump, like Clinton, does not have a protective press pool.

But people don't care as much about that because we're holding Trump to a different standard.

You can't criticize his policy plans, because he hasn't actually told us any of them.

Trump gives the illusion of transparency. He is all over Twitter, gives giant rallies, calls into news channels to chat. He is everywhere you look, so you think that must mean transparency.

But that's not real transparency. We have no idea what his presidential plans (if he actually has any) are. He blacklisted news organizations who sought the truth on him and thus could potentially make him look bad.

While Trump speculates about Clinton's health, he has released even less information about his own. Clinton released a two-page document from her personal doctor.

Trump released a one-page rant from his personal doctor, which sounded more like an episode of "30 Rock" than a medical analysis. The doctor admitted he wrote it in five minutes.

Thanks to the internet, a lot can happen in five minutes.

We have a constant stream of information and access, which can make me feel like Shay Mitchell is my best friend and can make me panic that Clinton is dying when she's carried out of a major event without quick updates on her status.

My generation is used to having close access to public figures. I don't consider it weird knowing when Mitchell gets laser hair removal; I just consider that a perk of Snapchat. But we don't have that easy access to Clinton.

For the past 30 years, the press and public have been clamoring for access to Clinton. And they've largely used it to demean and criticize her. It's no wonder she wants to control the story as much as possible by restricting access.

But that restriction is backfiring. It just makes it look like all those Republicans who have been criticizing Clinton our whole lives are right — maybe she really is hiding something. Even if that's not the case, that's how it's easily perceived.

That's why, when Clinton does provide personal information, we freak out. Last week, my Facebook feed, which had previously been filled with Sanders support, suddenly bubbled over with friends sharing that Humans of New York post Clinton did where she finally talked candidly about herself.

Hillary, if you want the Millennial vote, we need to see more like that.

Trump is held to a lower standard than the average presidential candidate — but Clinton, the first female nominee, is held to a higher one.

As I've said, she has a massive public career history to account for.

She's also the first female presidential nominee in a major party. That changes how she is seen and the reactions she gets.

It also means we young feminists and our woke baes want more from her.

A year and a half ago, I was interviewed about Clinton for the National Journal. I said then I wanted Clinton to be more inclusive in terms of intersectional feminism. I called her capable, but lacking.

This past winter, I cringed rereading what I said. Clinton proactively made repealing the Hyde Amendment — a law that predominantly hurts minority women — part of her platform. After she came out with that, Sanders, almost perfunctorily, dropped a statement saying he agreed.

Yet, I wasn't out there saying Sanders had to be a better intersectional feminist. It was enough for me, initially, that he agreed to add Clinton's idea to his platform.

But I wanted Clinton to be Gloria Steinem and bell hooks and Margaret Sanger and Laverne Cox and Johnetta Elzie combined.

That's the funny thing about sexism. Most of the time you don't realize how it's affecting your perspective, even if you consider yourself a diehard feminist.

Clinton's Millennial outreach has been moderate.

Every so often the campaign remembers they need to look at us youngins and throws us a bone.

In July, they released a "Trump Yourself" meme game, which was so popular, it crashed Clinton's site. The internet audience is clearly there. The Clinton campaign just isn't giving us a lot of opportunities to cheer.

This week, she released a college tuition plan, similar to Sanders' campaign. This is part of her "Millennial Activation Week."

But then again, why should the Clinton campaign be jumping for our votes?

Trump is held to a lower standard than the average presidential candidate.

You're not going to spend your time on millennials who are not going to come out to vote at least in the ground game going into November in the same way a brand wouldn't spend all of its time and resources going after someone who is only going to maybe try their product one out of five times.

Why should someone give you special treatment when it's not even guaranteed that you'll vote at all?

Sanders was lauded for getting Millennial support, and he still lost to Clinton by 3 million votes. She's done alright so far without us.

Until you register to vote, show up to the polls and prove that you're a force to be reckoned with, you can't expect anyone will take the time to prove themselves to you.