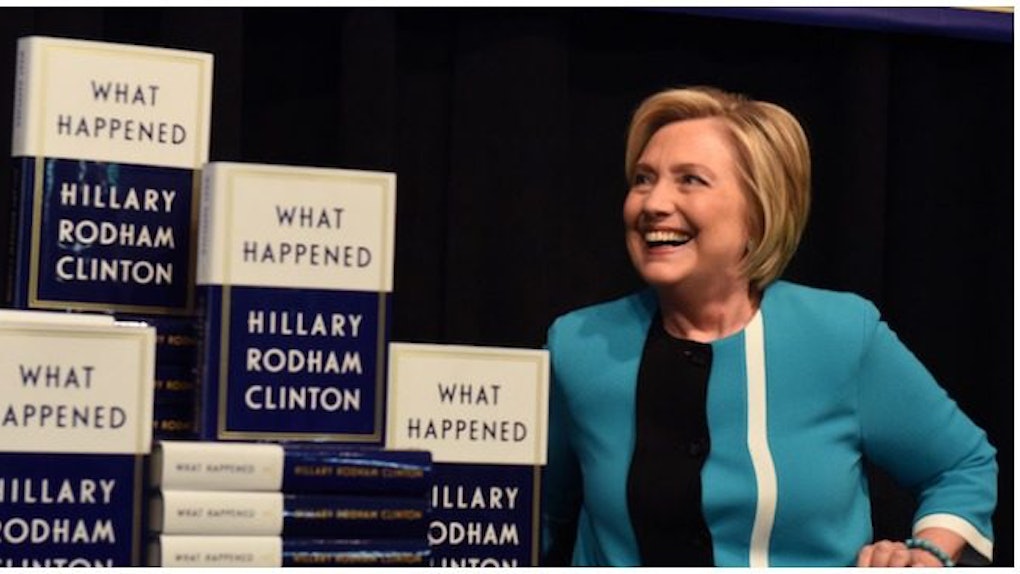 For many of us, the 2016 presidential election is burned into our brains, a slow-healing wound that we're still processing. And Hillary Clinton is here to process with us. The former presidential candidate sat down with Refinery29 to talk about her 2016 election post-mortem What Happened. Judging from the interview, she has become more candid, sharp-tongued, and ready to fight. Clinton spoke about the devastation of losing to Donald Trump, sexism and racism in the campaign, and keeping her guard up as a professional politician. But to boot, Hillary Clinton spoke about Ivanka Trump, and the idea that the first daughter is somehow outside the realm of political criticism.

Clinton said of Ivanka Trump's role in the White House,

Everyone associated with [Donald Trump] … they're either on board with that, or they're not. And if they're not, they need to be speaking out or leaving. But if they remain silent and just give lip service to contrary points of views, then they are part of his agenda and should be judged and held accountable for that.

In other words: Clinton believes that all of the tutting and head-shaking and "strongly disagreeing" -- or, in Ivanka Trump's case, silence -- that we often see from President Trump's allies is meaningless if the president's advisers and employees don't remove themselves or take action when it comes to the hateful policies he's peddling. And that includes President Trump's eldest daughter, who is an official adviser to her father and is often present for official White House business.

It's a rebuttal of a popular defense of the first daughter — many of Trump's defenders say she's not her father, and should not be punished for his deeds. But others say that she's a White House employee who claims she has a hand in his policy decisions, and therefore should be treated -- and criticized -- as such.

And, it seems, Clinton is firmly in the latter camp. Her comment about "lip service" is particularly biting, as Trump consistently positioned herself as a moderating force to her father's histrionic, often hateful campaign, which targeted Muslims, women, non-Christians, and Mexicans, among others.

The question of Ivanka Trump's role in the White House has come up time and time again.

Often, it's after President Trump makes one of his many unpopular decisions. When he decided to pull out of the Paris Climate Accord, people asked where Trump was (she was away with husband and fellow White House adviser Jared Kushner, and, according to Politico, moved on quickly from an issue she had previously said was near and dear to her heart). She also reportedly supported her father's decision to end an Obama-era equal pay rule -- despite equal pay being one of the platforms on which she campaigned for her father.

The interview is a stark change from campaign Clinton, who was often diplomatic, and tried to focus solely on President Trump, rather than his family.

That diplomacy was constructed, according to Clinton, based on research about how to present herself during the campaign. In the interview, she recalls how she was told to be on-guard:

I consulted a friend of mine, Sheryl Sandberg, who, as you know, is the COO of Facebook. And so she and two of her top researchers came to brief me before the election really got started. They said, 'All the research shows that the more successful a man becomes, the more likable he becomes. The more professionally successful a woman becomes, the less likable she becomes.' We know ambition is a double-edged sword. It's fine for a young man, or a man of any age, to be ambitious. But a young woman, or a woman of any age, to be ambitious raises all kinds of dissonance in people's minds.

So for many of us, to hear her call out the first daughter's complicity and blatant sexism at work in the election is eyebrow-raising -- and respectable. This seems to be Clinton's new normal: her Trump comment isn't the only moment that has us looking around to make, "Did she really just--?" eye contact with someone. It seems that Clinton's whole book, What Happened, is refreshingly blunt, as well.

The Washington Post's Dave Weigel posted an excerpt to Twitter, and it's hard to believe came from the usually tight-lipped politician. But The Daily Beast corroborated this anecdote in an early look at the book.

Former Congressman Jason Chaffetz should be shaking in his boots right now.

Despite a defeat that could destroy lesser people, Clinton seems to have become stronger and more willful in the aftermath of losing the presidency to Donald Trump. As she told Refinery29,

Everybody has losses. Not everybody will lose a presidential campaign, but there will be all kinds of losses and disappointments that are just part of human nature and life. [I'm] pulling back the curtain for people [to show that] being a woman in public life is like being on a high wire with no net.

She's been away for awhile, but this looks like a fresher, more vulnerable and vivacious side of Clinton. One, it seems, that's just getting started.