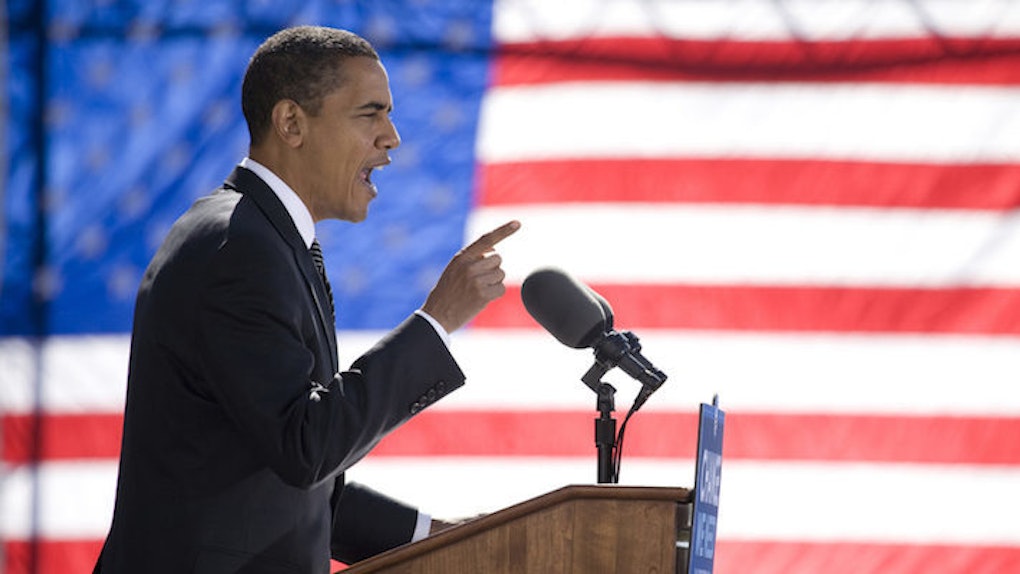 The United States leads the developed Western World in deaths by gun violence. It has now become almost as likely to die in a car accident as it is to be killed with a gun — about 31 per million people. Mass shootings like the recent Orlando and San Bernardino attacks incite the recycled gun control debate. The opinions polarize — do we want more guns or no guns?

Obama, 11 days before the Orlando shooting, tackled this difficult question on PBS NewsHour and his answer wasn't as "disarming" as you might think.

Doug Rhude, a gun shop owner, stood up and confronted Obama on his gun control stance. He prompted the idea that there is regulation on irresponsible and drunk drivers without taking the "good guys" cars away. Rhude then argued, "why then do you and Hillary want to control and restrict and limit gun manufacturers, gun owners and responsible use of guns and ammunition to the rest of us, the good guys, instead of holding the bad guys accountable for their actions?"

Semantics of the second amendment and slippery slope fallacies seem to repetitively excuse inaction within Congress. The argument perpetuates this idea that any gun laws will eventually mean no guns.

Obama argues that Congress's inaction leaves him with little options. In 2015, over 200 pieces of legislation were proposed to Congress in relation to firearms. Even after Sandy Hook, none were passed.

After the shooting in Charleston, South Carolina, last summer, Louisiana Gov. Bobby Jindal, condemned President Barack Obama for "trying to score cheap political points" when gun control was brought up. Jindal is a strong supporter of gun rights and echoes the chorus of many other conservatives that is inappropriate to bring up gun control legislation after a tragedy. It seems as though it is never the right time to bring up gun safety.

So after the gun owner's argument, Obama rebutted by putting to rest the argument that the left is "hell-bent" on confiscating responsible people's guns.

He progressed to say,

What I have said is precisely what you suggested, which is, why don't we treat this like every other thing that we use? I just came from a meeting today in the Situation Room in which I got people who we know have been on ISIL Web sites, living here in the United States, US citizens, and we're allowed to put them on the no-fly list when it comes to airlines, but because of the National Rifle Association, I cannot prohibit those people from buying a gun ... The only way we're going to do that is if we don't have a situation in which anything that is proposed is viewed as some tyrannical destruction of the Second Amendment.

Like Obama, the opinions of many are not heavily contrasted sides of the spectrum. Nine out of 10 Americans believe background checks should be conducted before purchasing a gun.

Death because of gun violence over the last 10 years has reached over 100,000. Too many of those shooters shouldn't have been able to purchase a gun. Including the recent perpetrator of the Orlando shooting who was on the FBI watch list.

The President stated back in January when he took executive orders to roll out Common Sense Gun Laws,

I believe in the Second Amendment. How did we get to the place where people think requiring a comprehensive background check means taking away people's guns?"