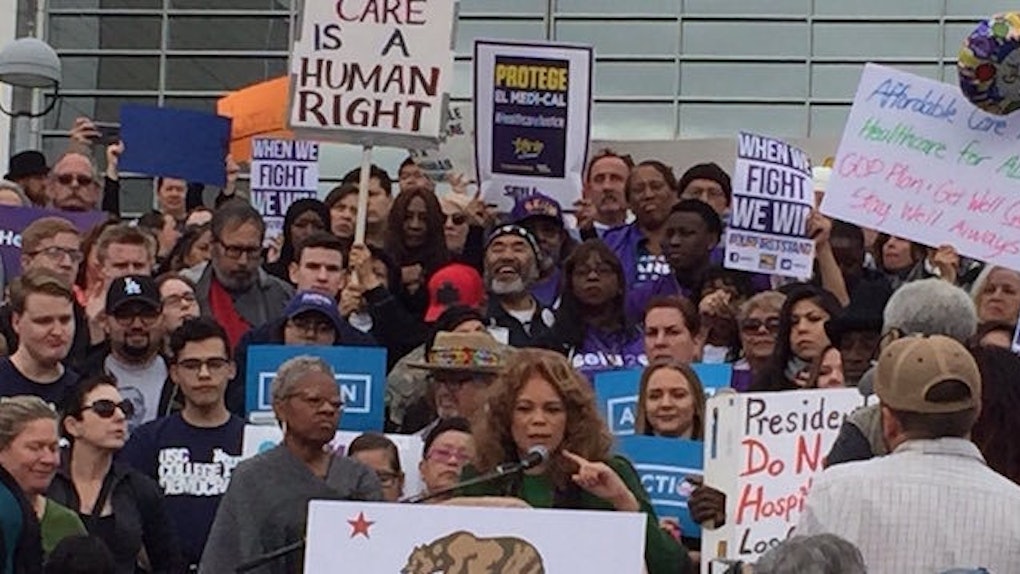 People across the country united today for "Our First Stand: Save Health Care Rally" — an national event aimed at fighting Republicans' efforts to repeal Obamacare, defund Planned Parenthood and make cuts to Medicare and Medicaid.

#OurFirstStand has been circulating across social media with photos of the turnouts in various cities.

In addition to photos circulating Twitter, politicians and citizens alike are voicing their concerns and reasons why we cannot allow the Affordable Care Act to be repealed when Donald Trump takes office in less than a week.

Some are highlighting the benefits ACA has had on our country, including the financial advantages.

Some say without the ACA, they would not have made it through their personal health struggles and that "the ACA saved my life."

Some say there's no reason the greatest country in the world shouldn't have health care access for everyone.

This point was a large part of Senator Bernie Sanders' platform when he was running for the Democratic nomination in 2016.

Some say this is a surefire way to put citizens' health in jeopardy.

Some say it is time for everyone to have the rights they deserve.

In an event spearheaded largely by Senator Bernie Sanders and other Democrats across the country, like Representative Nancy Pelosi of California, Senator Chuck Schumer of New York and Senator Elizabeth Warren of Massachusetts, people have come together to ensure that the health care afforded to Americans since the passing of ACA isn't completely repealed.

In late 2016, Sanders, Pelosi and Schumer released a statement on Bernie Sanders' website about "Our First Stand" and why people need to speak up. It reads,

Beginning in January, it is likely that Republican leaders in Congress will follow through on their threats to ram a budget bill that will severely undermine the health care needs of the American people. Millions of Americans voted for Donald Trump after he promised not to cut Social Security, Medicare and Medicaid. He must be held to his promises and should veto any legislation which cuts these vital and necessary health programs.

Only time will tell what the future has in store for our country's health care system.

We cannot argue this week marks the beginning of a scary time in our nation's history. Here's to hoping everyone gets the rights they are entitled to, even under a Trump administration.