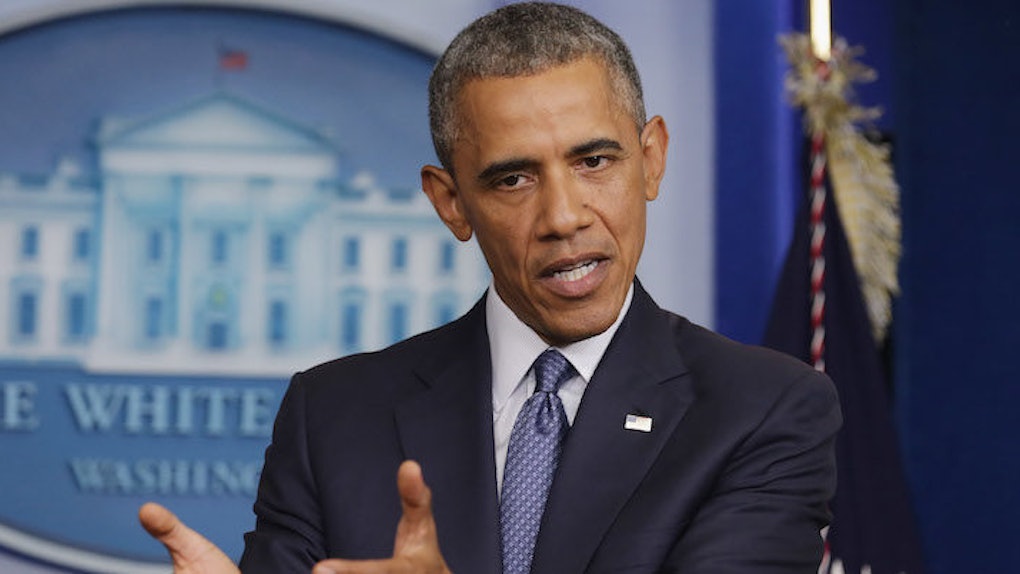 When there have been more shootings in one country than there are days in the year, one must stop and think: How did we get here?

I can't remember the last time I watched the news without hearing about victims of the end of a barrel.

How many families have lost their sons and daughters? How many innocent people have had their lives cut short because of someone in possession of a firearm?

I'm not an American, so many of you may disregard my views on Obama's new gun control plan and say I have no right to give any input.

But it truly breaks my heart every time I hear someone else has lost their life, due to mass shootings or gun-related suicides.

It baffles me that people are outraged, that they think their Second Amendment Rights are being denied and that their freedom is being limited.

I understand your concern for your safety, but when countless innocent lives have been lost due to this "right" to own a gun, how can you think anything is going to improve by keeping the current rules (or lack thereof) in place?

Is your right to own a gun really that much more important than the life of a child, or any life for that matter? Think about that.

"Anybody in the business of selling firearms must get a license and conduct background checks or be subject to criminal prosecutions."

How this has never been implemented is beyond me.

I wonder how many guns have been sold to people who aren't in the right frame of mind, or to people who have the intention of using that firearm to harm others.

This way, those who are entitled to own a gun will be granted his or her wish, while also creating more employment.

"Do more to help those suffering from mental illness so they can get the help they need."

$500 million is being put toward the improvement of people's mental health.

This brings us one step closer to healthier and happier lives for those who think life isn't worth living.

These people don't have to look to firearms to end their pain.

"Boost gun safety technologies ... If we can set it up so you can’t unlock your phone unless you’ve got the right fingerprint, why can’t we do the same thing for our guns?"

This is something I believe will cut gun related crimes tremendously.

How many people have come into the possession of a firearm and unintentionally hurt someone?

Our unalienable right to life, and liberty, and the pursuit of happiness -- those rights were stripped from college students in Blacksburg and Santa Barbara, and from high schoolers at Columbine, and from first-graders in Newtown. First-graders.  And from every family who never imagined that their loved one would be taken from our lives by a bullet from a gun. Every time I think about those kids it gets me mad.  And by the way, it happens on the streets of Chicago every day.

This needs to stop.

Other political figures such Hilary Clinton, Mark Kelly and Gabby Giffords have spoken out in support of Obama new plan for gun control.

Attorney General Lynch backed these ideas and initiatives, saying they are well within Obama's legal authority.

The majority of gun owners support them as well.

These new laws are not going to prevent all deaths, but they can save some lives.

The recommendations are consistent with Second Amendment rights.

Donald Trump claimed that he will veto Obama's actions were he to be elected. That would put American in trouble.

Paul Ryan believes that Obama's words are a "form of intimidation that undermines liberty."

A form of intimidation that undermines liberty would be preventing people their rights to vote, to education, or to clean water or food -- not keeping guns from criminals.

The Second Amendment Right states "A well regulated militia, being necessary to the security of a free state, the right of the people to keep and bear arms, shall not be infringed."

This right should be viewed in terms of self defense, resistance to oppression and the civic duty to act in concert in defense of the state.

This right was also drawn up in 1791 -- that was 225 years ago, people! Are we so incapable of development or change? Since then we've abolished slavery. We've fought for peoples' rights to marry whomever they wish.

When I think of guns, I think of violence, death, pain, slaughter and war.

I don't think of safety.

The purpose of a gun is to kill.

A gun doesn't give someone life; a gun takes life away.