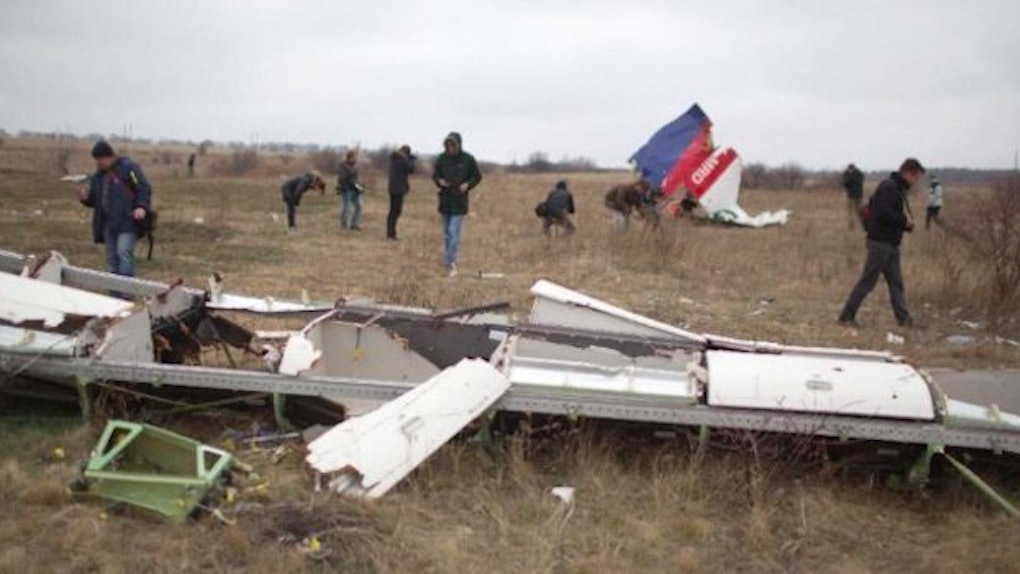 In July 2014, Malaysia Airlines Flight 17 was traveling from Amsterdam to Malaysia when it crashed in eastern Ukraine. All 298 people aboard were killed.

The plane went down in a region that was, and continues to be, consumed by armed conflict between Ukraine and pro-Russian separatists.

On Tuesday, Dutch air accident investigators released a report claiming the plane was likely brought down by a Russian-made Buk missile shot from the ground, The New York Times reports.

Tjibbe Joustra, chairman of the Dutch Safety Board, said,

Flight MH17 crashed as a result of the detonation of a warhead outside the airplane above the left-hand side of the cockpit.

If it's any consolation to the families of the victims, the investigation also concluded the passengers either died instantly or abruptly lost consciousness.

Since the crash, it's widely been speculated pro-Russian separatists shot the plane down. As The New York Times highlights, these revelations coincide with this theory but don't explicitly blame any particular actor for the crash.

Joustra did note, however, he found it extremely problematic Ukrainian authorities allowed planes to continue to fly over the conflict zone. He stated,

Why was Malaysia Airlines Flight MH17 flying over an area where an armed conflict was taking place? The question was on the minds of many people after the crash. The answer was as straightforward as it is disquieting: Almost all operators were flying over that area. And why? Because nobody thought that civil aviation was at risk.

In other words, Ukrainian authorities should've shut down the airspace as a precaution, and their failure to do so helped lead to the fatal crash.

As NBC News notes, the Russian-made Buk missile, introduced in the early 1970s and likely used to shoot down MH17, is a remnant of the Cold War.

The origin of the missile, as well as evidence the Russian government backed the rebels in eastern Ukraine who shot down another aircraft weeks before, seemingly ties Russia to the MH17 crash. But, Russian authorities and rebel leaders continuously denied such assertions.

The White House issued a statement saying this is an important development in terms of holding those responsible accountable and reiterating it always believed the missile came from territory held by pro-Russian rebels.

Dutch prosecutors will continue to investigate the crash, but it's difficult to feel optimistic about the prospect of anyone being held responsible given the complicated circumstances.

Meanwhile, the conflict in Ukraine rages on as Russia continues to escalate its military operations in Syria.

Citations: Malaysia Airlines Flight 17 Most Likely Hit by Russian Made Missile Inquiry Says (The New York Times), Whats a Buk What to Know About the Cold War Missile That Downed MH17 (NBC News), MH17 is the third plane this week shot down over Ukraine under mysterious circumstances (Vox)