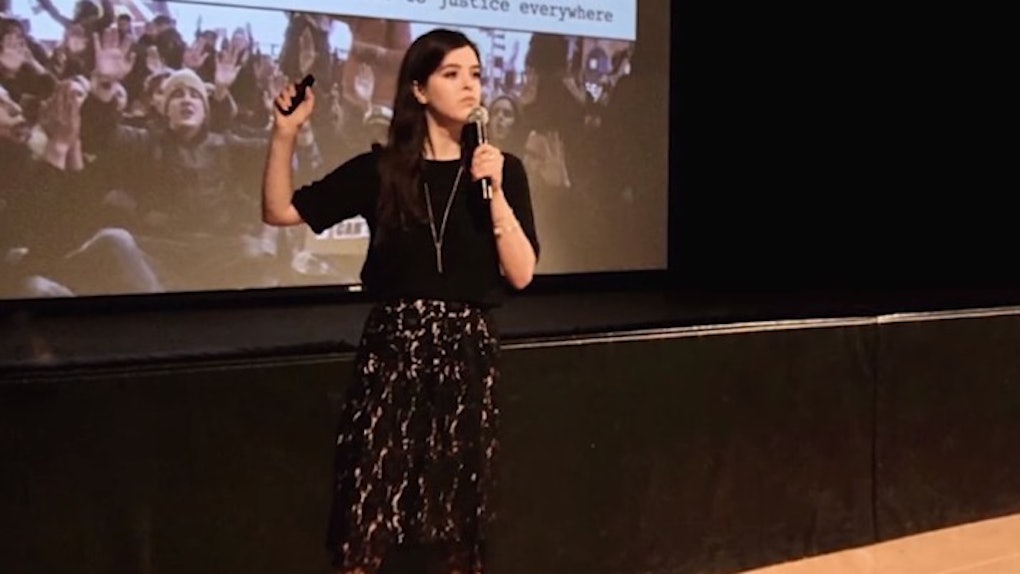 Erin Schrode turned 25 years old in mid-April. This is extremely helpful since she's running for Congress, and you have to be at least 25 to do that.

Should Schrode win in her campaign to represent California's second district, she will be the youngest person in Congress.

Her status makes her doubly unusual for a congressional wannabe. For one, she's actually young. For another, she's not a dude. Those may not seem like odd factors, but in the US Congress, young people, women and young women are pretty rare.

Schrode told UPROXX in a video,

I am not against big risks or taking chances -- not crazy absurd ones, but logical ones. This makes sense that we should have young women represented in Congress.

While many young people feel discouraged by politics and don't participate, Schrode is one of a few Millennials running for office this year.

Schrode explained her drive to run for office in, appropriately enough for the Millennial generation, an online post.

Clean water is a human right. Women add value to society. Mental health is a veritable illness. Black lives matter. Affordable healthcare helps families. Education can be an economic engine. It's time to deliver on the promise of my generation.

Schrode is registered as a Democrat and has a resume full of accomplishments in environmental work. She founded the environmental nonprofit Turning Green when she was 13, and she's since continued to work and give speeches about the environment.

For Schrode, it's all about "seeing where in your world you can make a difference," she told UPROXX.

She understands she alone cannot solve problems, but policy can, which is why she got involved in politics.

Like any 25-year-old American, Schrode is active on social media. Her personal feeds are a mixture of campaigning and mouthwatering shots of delicious meals (which are sometimes the same thing).

Schrode is up against incumbent Democrat Jared Huffman, who is more than twice her age at 52 years old.

California has its primary vote in early June, and the top two candidates to come out of that vote will face each other for the position in Congress in November elections. Huffman is likely to come in first in the primary vote, according to Milk, but Schrode hopes to come in second and face him in the fall.

Citations: This 25-Year-Old Running For Congress Defies Millennial Stereotypes (UPROXX), 25-YEAR-OLD ERIN SCHRODE IS THE YOUNGEST WOMAN TO EVER RUN FOR CONGRESS (Milk), Yes, I Am 24. Yes, I Am Running for US Congress. #ErinForUs (Huffington Post), WHY IS A 25-YEAR-OLD WOMAN RUNNING FOR CONGRESS? (Erin For Us)