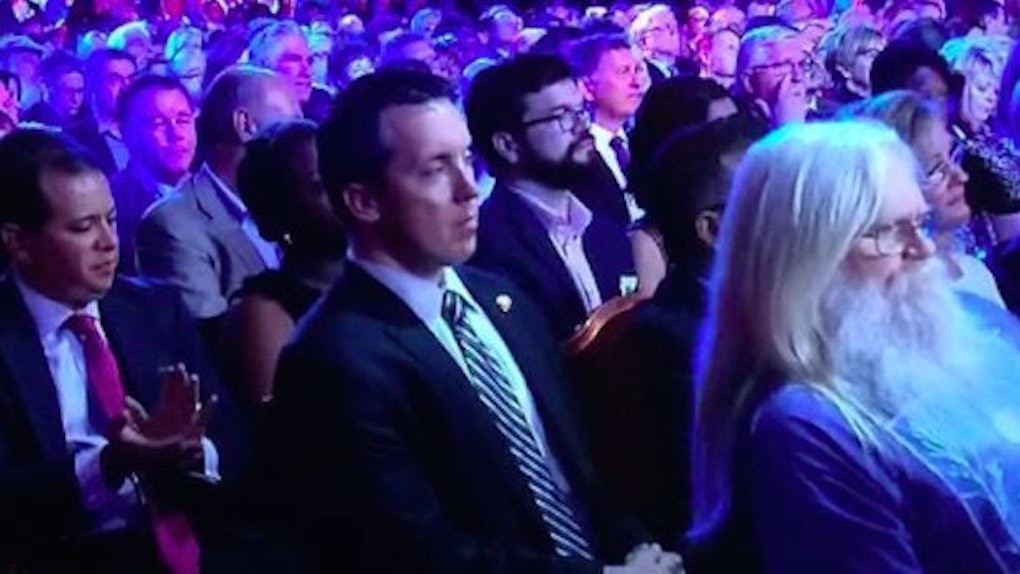 Dumbledore Was At The Democratic Debate And People Literally Can't Even

Back in September, the GOP's presidential debate featured a little actual debating and a whole bunch of America thirstin' over some random, tall glass of anti-abortion and pro-gun water who kept creeping up on our video screens.

Can we ask this guy his views? Or primarily what his ideal first date is? #GOPDebate#HotDebateGuypic.twitter.com/goMc8kCy5Y — Sam Haines (@Samuel_Ha_) September 17, 2015

This was an obvious problem for the Democrats.

Oh, I know. By getting effing Dumbledore to buy a ticket to the first Democratic debate and then casually showing him sitting in the audience.

Hear me out for a second: This guy wore a powder blue, printed t-shirt to this formal debate, and wizards notoriously have no idea how to blend into Muggle society.

Also, Dumbledore WOULD be a Democrat. He frequently tries to stop Voldemort from raging war against the Muggles, Hogwarts runs on the most renewable energy of all -- MAGIC -- and he's obviously pro-gay marriage. Dumbledore is a staunch Democrat who needed an open forum to watch his candidates talk about the issues before voicing his support for one specific nominee.

He faked his death years ago so he could sneak out of the castle last night in order to sneak into the debate.

The Internet was rightfully enthralled by this magical being.

I'm voting for that wizard in the audience. #DemDebate — Lauren Greenberg (@LaurenGreenberg) October 14, 2015

And now for a question on Wizard/Muggle relations from the audience. #DemDebate pic.twitter.com/dP1vNTsSy3 — Heather Hogan (@hhoagie) October 14, 2015

Citations: So Dumbledore Showed Up at the Democratic Presidential Debate and the Internet Is Obsessed (Cosmopolitan)