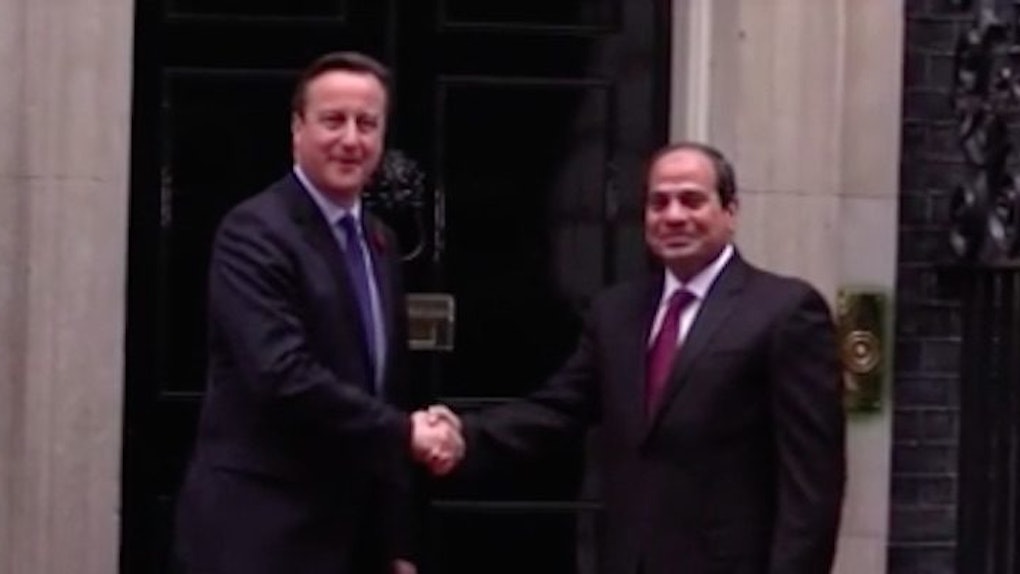 Britain and Egypt Are Having A Super Awkward Meeting Amid Protests

British Prime Minister David Cameron and Egyptian Prime Minister Abdel Fattah el-Sisi are having a meeting way more awkward than that time you met your boyfriend's parents... after they already walked in on you.

This meeting has been in the works for months after Cameron extended an invitation to Sisi for talks at his office on 10 Downing Street back in June.

It was already going to be at least a little awkward. Activists, professors and even members of the government called for Cameron to cancel the visit, citing Sisi's controversial record on human rights.

On top of these tensions, Britain and Egypt are now at odds over a Russian airplane crash that happened in Egypt's Sinai Peninsula on Saturday. The plane was leaving Sharm el-Sheikh, a spot many Brits vacation in, tying it that much closer to Cameron.

The cause of the plane crash is still unverified. Russia and Egypt both cautioned jumping to conclusions, saying they're still investigating. But US intelligence allegedly believes a bomb caused the crash, according to reports on Wednesday.

On Thursday, Cameron said it was "more likely than not" a "terrorist bomb" caused the crash.

ISIS claimed responsibility, but none of the organization's reports has been verified or upheld by any government.

In response to the crash, the UK suspended flights between Britain and Sharm el-Sheikh on Wednesday. Egypt's foreign minister called that decision "premature and unwarranted."

Even within Egypt, Sisi is a polarizing figure.

Some still strongly support the military general who ousted Mohamed Morsi in 2013 among mass protests. Morsi had been democratically elected in 2012 after the overthrow of Hosni Mubarak during the 2011 Arab Spring, but had Islamist ties.

But others are against Sisi, saying he is taking away democratic freedom and abusing the justice system with mass arrests and death penalty sentences. Last month, there was very low turnout for a parliamentary election -- a sign of Egyptian people's loss of faith in the democratic system.

So it was under all these conditions Sisi and Cameron finally met for their scheduled talks at Downing Street on Thursday.

They were greeted by hundreds of protesters, according to The Guardian, many of whom criticized Cameron for welcoming Sisi in the first place.

A group called Stop Sisi hosted a die-in outside of 10 Downing Street, with protestors wearing suits with the words "democracy," "freedom" and "human rights" written on them. One protestor reportedly wore a noose.

Many of these protestors were taken away and arrested by police, according to reports and video.

Meanwhile, Sisi supporters are also out in front of Downing Street. Videos show the two sides facing off across from each other with police presence between them.

Dinner with your boyfriend's family doesn't seem quite as awkward now, does it?