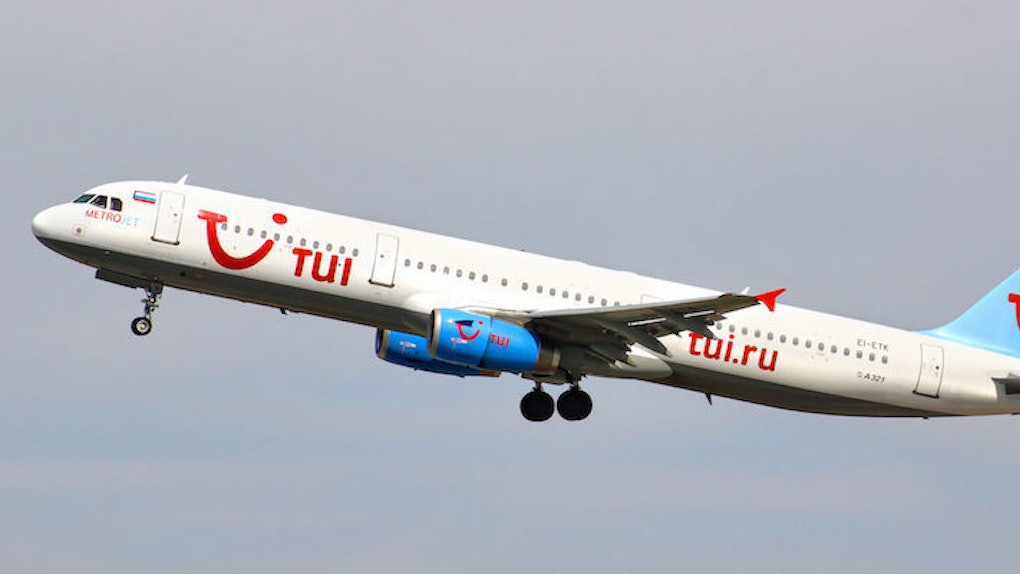 A commercial airplane carrying 224 passengers and crew crashed in Egypt this morning after losing contact with air-traffic controllers shortly after takeoff.

There were no survivors.

The St. Petersburg-bound Airbus321, operated by Russian airline Kogalymavia, departed at 5:51 this morning from Sharm el-Sheikh, a costal town on Egypt's Sinai peninsula.

Minutes after reaching its cruising altitude of 31,000 feet, the aircraft experienced “technical difficulties” and lost contact with radar. It began nosediving, falling about 6,000 feet per minute, and crashed soon after in Hassana, a remote, mountainous region near Egypt's border with Israel.

An Egyptian security officer at the scene of the crash told Reuters,

I now see a tragic scene. A lot of dead on the ground and many who died while strapped to their seats… The plane split in two, a small part on the tail end that burned and a larger part that crashed into a rock. We have extracted at least 100 bodies and the rest are still inside.

According to the Russian Embassy in Cairo, Egyptian officials said the pilot had been trying to make an emergency landing at El-Arish.

However, the Islamic State (ISIS) has since claimed responsibility for the crash.

In a statement released on Twitter, the terrorist organization wrote,

The fighters of the Islamic State were able to down a Russian plane over Sinai province that was carrying over 220 Russian crusaders. They were all killed, thanks be to God.

Despite ISIS's claims, officials maintain a technical failure was the sole cause of the crash. The aircraft shows no signs of external trauma to indicate it had been shot down or blown up.

Investigators are hoping that the flight recorders, one of which has already been recovered, will provide more clues as to what exactly happened aboard the doomed flight.

Citations: Russian airliner with 224 aboard crashes in Egypts Sinai all killed (Reuters)