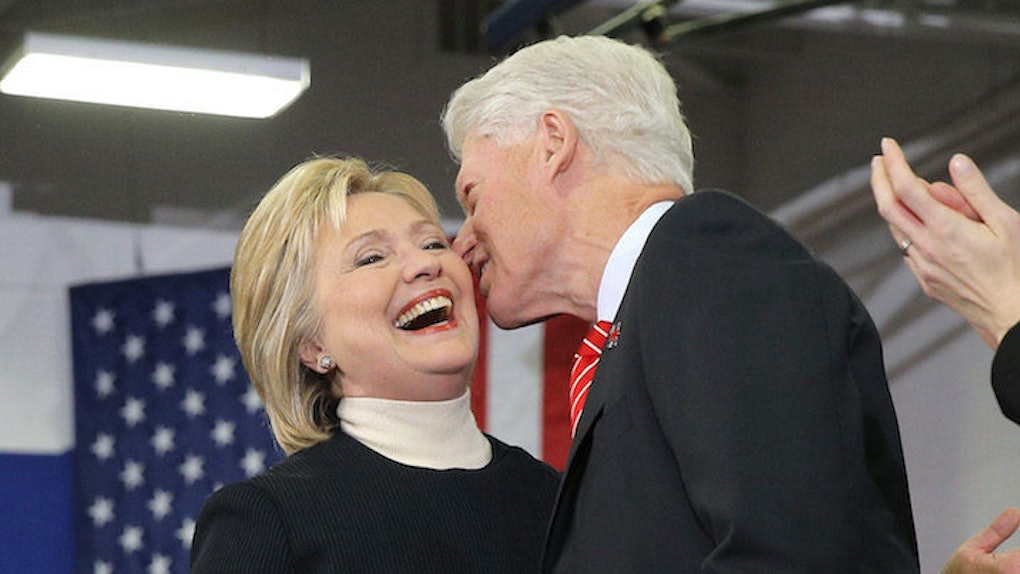 With this presidential election, there is a possibility we could have two role-redefining firsts.

If Hillary Clinton wins the Democratic nomination and goes on to win the general election in November, she will be America's first female president.

And with that, we'd have our first ever first gentleman.

Bill Clinton will step into a role historically held by women. The role of first spouse in America has evolved over the years, but it is typically concerned with being an anchor in the White House.

Household activities have long been considered women's work; our society has created gender roles with women as housemakers and men as moneymakers. Because of this, lots of people have begun asking about how Bill, a man and former president, would take on the role of first spouse.

These questions hinge on the apparently unbelievable idea a man could do household chores like picking out floral arrangements and china.

My mom was just talking about how Bill Clinton wouldn't make a good First Lady because he wouldn't be able to pick out the China plates — Kellie Muszysnki (@KellieMosh) May 13, 2015

Our reaction to even the suggestion of a man doing household work shows how far we still have to go to overcome gendered stereotypes.

Over the past few decades, society has been moving toward housework equality. Women entered the workplace in strong numbers and policies like paternal leave are (slowly) becoming less rare.

Still, women do much more unpaid labor at home than men. People hold ingrained beliefs women should be cooking, cleaning and taking care of children. This holds women back as it takes away their time and energy and makes employers consider them less stable -- and therefore less worthy of a promotion.

When we chuckle at the idea of Bill Clinton picking menus, we're reinforcing gender roles that keep us from equality.

Moreover, we're showing how little we value housework. Home chores are literally what keep us all running functionally. Having the right decorations and menus at the White House play a significant role in how the country is viewed as a whole.

It doesn't help Hillary Clinton herself is getting in on the idea Bill can't pick flowers.

Clinton was asked about the role of a first spouse at a Democratic debate back in December. ABC News journalist Martha Radditz asked Hillary:

You have said that Bill Clinton is a great host and loves giving tours but may opt out of picking flower arrangements if you're elected. Bill Clinton aside, is it time to change the role of a president's spouse?

Clinton responded Bill would help advise her on issues, but:

With respect to my own husband, I am probably still going to pick the flowers and the china for state dinners and stuff like that.

She reemphasized this idea at a campaign stop on Sunday night. Clinton said Bill would be put to work on economic issues were she to become president.

Although Clinton intimated she'd retain traditional gender roles by picking out the flowers, her ideas for Bill as first spouse speak to the way she revolutionized the role.

Clinton had a career in law before Bill ran for office. While he was president, she did policy work, pushing forward a healthcare act that ultimately failed to get passed. The act was called Hillarycare -- more than a decade before Obamacare showed up.

While Bill was running for office in 1991, Clinton's role as a wife was publicly debated. She famously said:

I could have stayed home and baked cookies and had teas, but what I decided to do was fulfill my profession.

This comment led to scores of criticism, ultimately prompting Clinton to submit a cookie recipe to Family Circle magazine to support a more traditionally maternal image.

Two decades later, we're still stuck with the idea a first lady has to act like a classic housewife. Michelle Obama had similar experiences when her husband was first running for president.

Michelle and Barack met when Michelle was his mentor at a law firm. Michelle Obama had a successful legal career, much like Clinton. But when Barack was elected, she quit her job as vice president of community and external affairs at the University of Chicago Hospitals to become first lady.

This pained many people familiar with the story of women giving up their careers for their husbands' careers. Michelle even called it "a bit disconcerting."

But over the last seven years, Michelle Obama has supported issues like healthy eating, exercise and education (notably, issues that affect children).

It's up to everybody to decide for themselves what gives them value and purpose. The one thing we shouldn't do is make blanket assumptions.

Thinking a man can't pick flowers is based on decades of sexism reinforcing gender inequality. Thinking housework is less important than a career does the same. Thinking all a first spouse does is choose menus dismisses the hard work first ladies have done in America's history.

After all, it was Dolley Madison who saved George Washington's portrait when the White House was burnt down during the War of 1812.