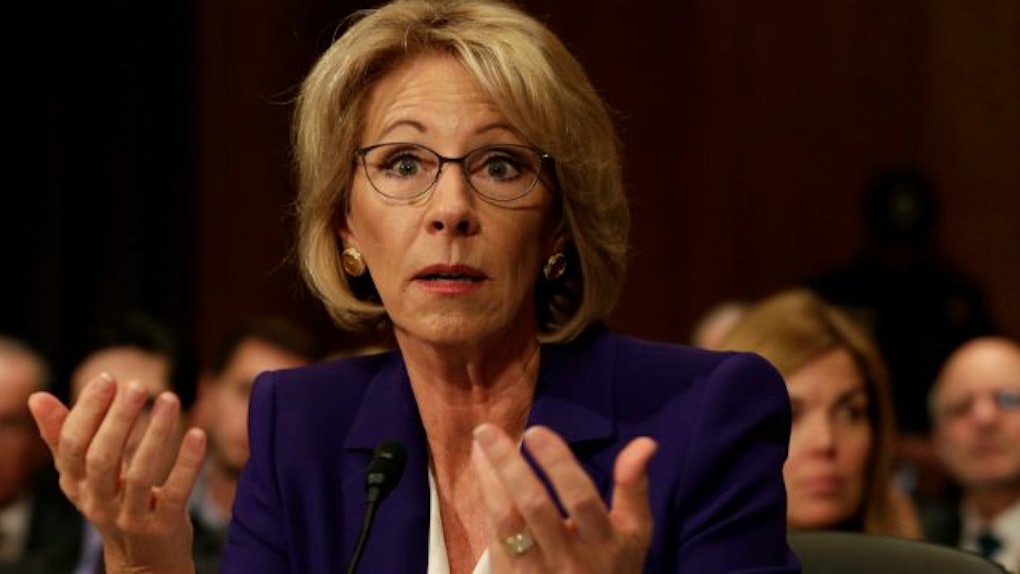 Betsy DeVos' Confirmation May Be Due To Family's Donations

When all was said and done, 50 senators voted for Betsy Devos' confirmation as secretary of education, and 50 voted against it.

With the only constitutional duty of the Vice President being the breaking of a tie in the Senate (and doing damage control for the President), Mike Pence cast the final vote to push Betsy over the edge (not of a cliff, but toward confirmation).

The 50 who voted for DeVos? All Republicans. Surprised?

Of course, you're not.

The GOP has been receiving funds from the DeVos family in the form of super PACs for decades, enough that if the DeVos family wanted to, they could rename the Republican party to the "DeVos Party Minus All The Caviar We Usually Have At DeVos Parties" and make Marco Rubio their butler.

In fact, Betsy herself has donated a whopping $115,000 to Republican senators since 1980. Her family gave $950,000 during the same time frame and $8.3 million to Republican Party super PACs in the past two election cycles.

Aside from two Republican senators who voted against her, the rest of the Republicans voted not only along party lines, but voted along the money trail.

In fact, it was the vastly unqualified Betsy herself who said it was "possible" her family had donated upwards of $200 million to the GOP.

If you're going to confirm a secretary of education who believes guns should be in schools to "protect from potential grizzlies," I'd imagine $200 million probably helps you toss aside your ethics and common sense.

Here is the list of GOP senators and the amount of money they've received in contributions from the DeVos family since 1980.

Out of these 23 individuals, only one did not vote for Betsy's confirmation: Lisa Murkowski from Alaska, you know, the place where you can see Russia from.

Oh, who am I kidding? After the last election, we're basically all Russian now!

Murkowski even had an excuse ready if she decided to vote against her conscience: GRIZZLY BEARS ACTUALLY DWELL IN ALASKA, ONE OF THE ONLY FIVE STATES THAT FUCKING HAVE GRIZZLY BEARS.

I'd SMDH, but I'd probably have to go the chiropractor after that much damn head-shaking. But wait, there's even more!

The DeVos unloaded from their Scrooge McDuck-like vault $2 million to the Senate Leadership Fund, which belongs to Senate Majority Leader Mitch McConnell.

Another $200,000 was sent to American Crossroads, which then dumped that into the Senate Leadership Fund in turn.

While campaign finance reform advocates rightly asked those who had received contributions from the DeVos family to recuse themselves, zero of them did.

Maybe Betsy will now take the time to learn the difference between proficiency and growth.

Citations: Here's How Much Betsy DeVos And Her Family Spent To Back The GOP Senators Who Confirmed Her (Huffington Post)