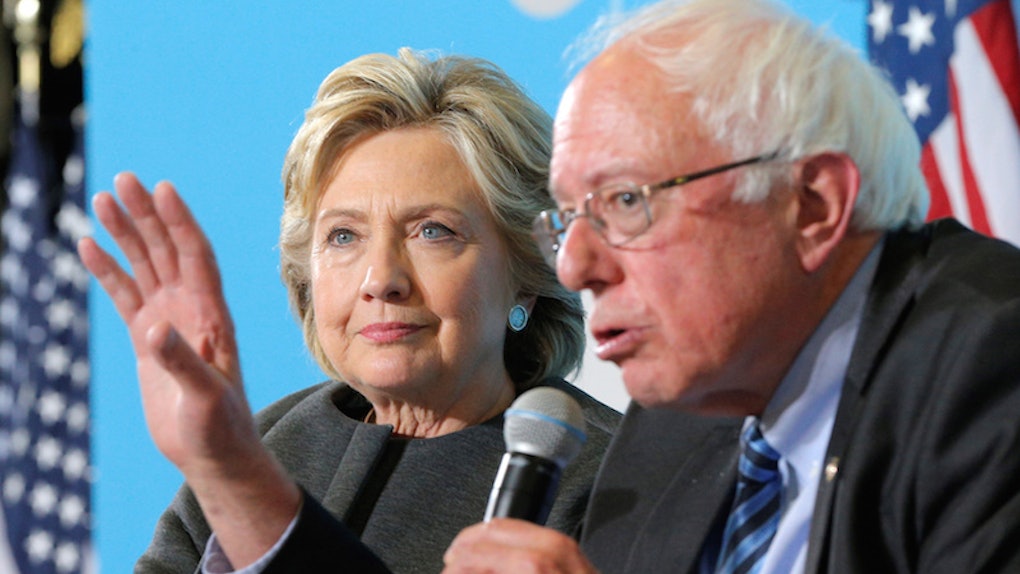 Bernie Sanders Has 'Nothing Polite To Say' About Election Outcome

Donald Trump won the presidential election, and everyone at the Elite Daily office looks like they just got divorced.

All day, I've watched people wander to and from the kitchen, clutching giant cups of coffee — their only anchor to the real world.

A few minutes ago, a cluster of writers huddled around a computer to joylessly look at a video of a bat eating a banana.

It was supposed to cheer them up, but all it did was make them jealous of creatures who don't understand what happened last night.

As for me, I'm on four hours of sleep, and I would have rather gotten a colonoscopy without sedation than come in to write anything for Mother Internet today.

It is not a pleasant scene.

But there is one man who has refused to even say anything today.

Bernie Sanders' team, when asked to comment on Trump's victory, responded simply by saying they “have nothing polite to say right now.”

It is a sentiment many of us can sympathize with at this juncture.

Although for everyone around me, at least for today, anger has widely been beaten out by a shell-shocked malaise, punctuated once every couple minutes by stabs of utter terror and foreboding.

As Complex reports, Bernie put out this video soon before the election, insisting people get out and vote.

In ways, these people have a point. Bernie Sanders could very well have won against Donald Trump. According to several polls earlier in the race, he had better odds of defeating Trump. And it was the Democratic establishment that, we now know, fought to prevent him from getting the nomination.

On the other hand, (and aside from the fact that saying “I told you so” is as unproductive as it is what children say) many believe that it was Sanders' hard-fought primary campaign with Hillary that turned public favor against her — simply because she seemed to pale in comparison to many.

But that primary campaign also cultivated certain overtly misoginistic undertones when it came to a Clinton presidency (undertones that have lingered ever since her race against Obama).

These sentiments were encouraged not by Bernie Sanders, of course, but from a certain sect of his supporters, and members of the media.

As The Washington Post points out, white men, especially, from all over the country, vastly preferred Bernie to Hillary, regardless of their politics.

One of the groups that votes against Hillary Clinton most consistently is white men. In 20 of 23 contests for which we have exit poll data, white men have preferred Sanders to Clinton... In Vermont, Sanders saw one of his most dominant demographic performances: White men in the state favored him by 83 percentage points over Clinton.

There were certainly many problems with her as a candidate, but the caliber of revulsion from her detractors speaks volumes.

After all, look at Obama, who ran for president while still against gay marriage, deported more illegal immigrants than George Bush, kept Guantanamo Bay open and has killed hundreds of innocent civilians in drone strikes.

They give him a pass. They take the bad with the good. But Hillary's flaws makes their blood boil.

This heightened bias, some argue, never shook off her after the primary, even when she stepped up to face a candidate who had a veritable treasure trove of scandalous, offensive and dangerous traits.

America tripped over itself giving him the benefit of the doubt while jeering at her for every fault, flaw or misstep.

It was a long and difficult campaign, and many of us feel disgusted or just depressed.

But it not as simple as "I told you so."

In fact, it's not simple at all. Thinking it could be was our mistake all along.