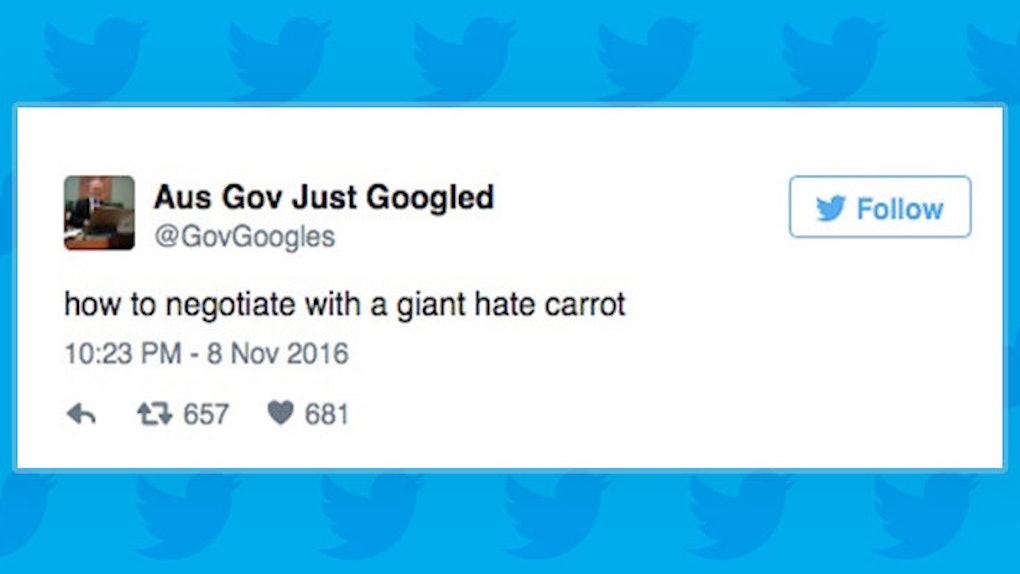 By now you've probably heard the news that Donald Trump won the election.

If your immediate reaction was to vent a myriad of overwhelming emotions on Twitter, it turns out you're not alone.

Basically everyone on the face of the planet is tweeting about the election results, and right now the general consensus on Twitter is that America is basically... well, fucked.

Apparently, Americans aren't the only people feeling a bit uneasy about Trump becoming the next POTUS.

Australia's government is tweeting the nervous thoughts we're all having about Trump's win as well.

OK, maybe it's not the actual Australian government.

But it should go without saying the actual government probably has some strong opinions about the election results, too.

After all, I'm sure the Aussie immigration office is going to be bombarded with applications from Americans now that the guy who "grabs women by the pussy" is going to be running the United States.

In honor of the election, the comical account has been tweeting hypothetical Google searches from the members of the Parliament House.

All of its comments are guaranteed to make you nervously laugh as you contemplate the future of America.

America? No, I'm sorry. I don't know any countries by that name.

Parliament might need some extra training on how to effectively communicate with a hateful, spray-tanned man.

Well, I guess it's going to be up to Australians to repopulate the western world.

Oh, that's an easy one. Just let him "grab her by the pussy."

How about you just isolate him from the rest of the other races in the world by building a giant wall that only surrounds him?

I knew I should have been DVRing that doomsday preppers show all along.

You can never be too prepared for the Trumpocolypse.

Or possibly get an eight years supply of canned food, depending on how much America hates itself.

Now would be a good time to ask Austin Powers for the name of the scientist who froze him.