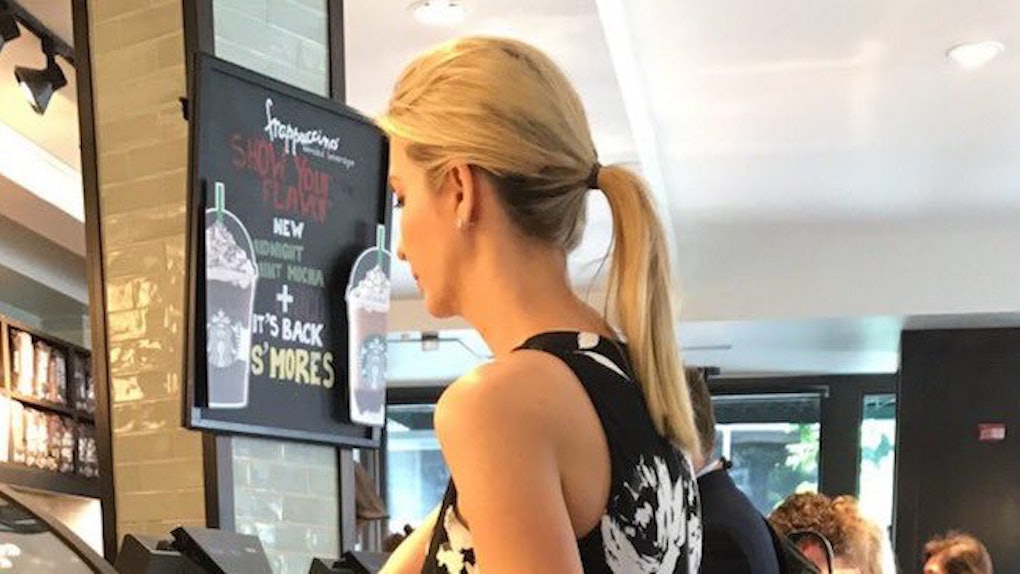 Ivanka Trump was spotted at a Starbucks in Washington D.C. on Wednesday morning.

She was waiting in line herself — just like the rest of us regulars, engaging in America's favorite pastime (getting coffee) — wearing a black and white floral dress with her hair in a ponytail.

Let's get down to the particulars of Trump's Starbucks order.

First of all, she seems to have paid via a real wallet, eschewing the rewards-winning app.

This choice frustrated some Twitter users, who felt that Trump really deserves the value of a very good deal.

Second of all, according to witnesses, Trump gave her name as "Iva."

Courtney Couillard, a friend and another Starbucks customer who spotted Trump in the store on Wednesday morning, tells Elite Daily that Trump spelled out "I-V-A" when asked for her name.

Now we can only ponder what misspellings Trump must have received in her life.

Now what you're really here for: Trump's Starbucks order.

"I just kind of looked up and thought it might be her. I really only heard the tail-end of her order: 'no whip.' Seemed rather basic. Rather Ivanka," Couillard says.

Trump ordered a non-fat vanilla latte without whipped cream, according to both Couillard and Ellie Hall, a BuzzFeed reporter who also happened to be in line with Trump.

Which, honestly, I want right now. That sounds delicious.

So if you're engaging in some Trump cosplay or just want to live a day in Trump's shoes, that's what you should order.

But in all seriousness, it was just another day in Washington D.C.

Hall wrote on Twitter that she hadn't even noticed Trump in front of her until she went to order.

"I was also super interested to see if anyone else noticed," Couillard tells Elite Daily. But, turns out, "there wasn't really much of a stir in the store."

Go on with your days!