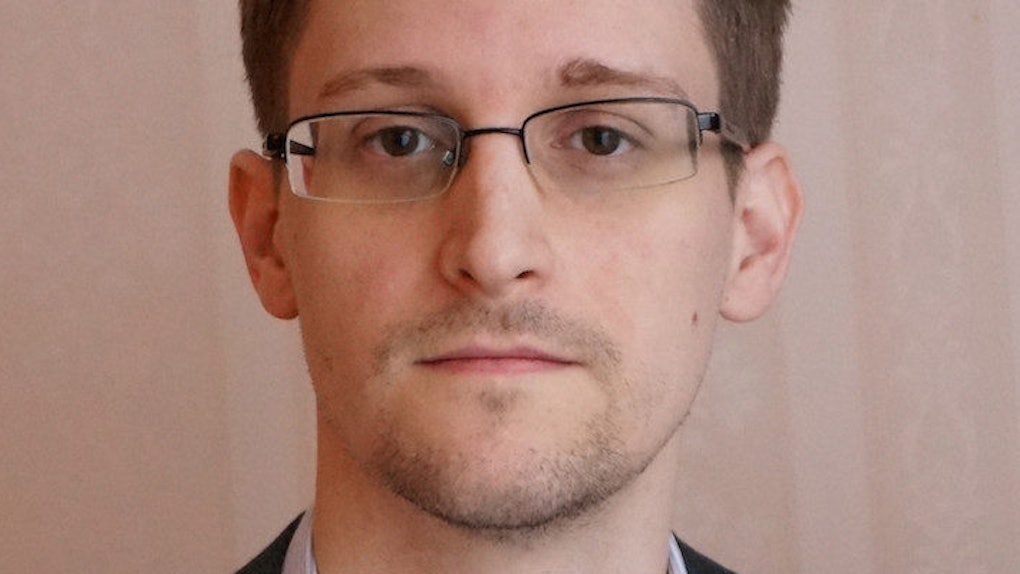 It was a chilly, pre-dawn Monday in Fort Greene Park, Brooklyn. Amongst its dark shadows and the eerily silent playgrounds, a troupe of three guerrilla artists and several other unknown faces installed a realistic bust of NSA whistleblower Edward Snowden atop the park's Prison Ship Martyrs Monument, a memorial to Revolutionary War soldiers.

Along for the ride to exclusively document the illicit installation of this bust was New York's ANIMAL, a daily art and culture publication.

The bust, which has a remarkable likeness to Snowden, took more than six months to complete, weighs more than 100-pounds and measures 4-feet tall.

Early Monday morning, the bust of Snowden was finally unveiled to the public.

As part of a statement given to ANIMAL, the activists said:

It would be a dishonor to those memorialized here to not laud those who protect the ideals they fought for, as Edward Snowden has by bringing the NSA's fourth-Amendment-violating surveillance programs to light.

By Monday afternoon, the Parks Department covered the bust with a tarp, and before dinner, it was removed.

And just like that, in the course of a day, six months of hard work propagating a message about freedom, privacy and the right against unreasonable searches and seizure was gone.

Which, it seems, is also the case with the real Edward Snowden.

Less than a day earlier, John Oliver, on his HBO program "Last Week Tonight with John Oliver," traveled to Moscow to interview the infamous whistleblower.

In the interview, Oliver confronted Snowden about a range of topics in a hilarious and deeply informative manner.

Perhaps the most popular talking point in the interview is when Oliver asked whether Snowden read all of the estimated 200,000 NSA documents he stole and gave to journalists in Hong Kong.

Snowden carefully evaded the question, saying, “I do understand what I turned over.”

Without getting into the topic of whether Snowden is a hero or a traitor, there was an underlying theme to Oliver's interview that showcases a hard truth regarding the American public and their knowledge and care of politics, government spying activities and international affairs.

In a 2013 letter posted on the Brazilian-based Folha de S.Paulo website, Snowden wrote, “I was motivated by a belief that the citizens of the world deserve to understand the system in which they live. My greatest fear was that no one would listen to my warning.”

During the "Last Week" interview, Oliver had Snowden watch a video taken in Times Square of Americans not knowing who Edward Snowden was or what he had done.

The Americans, who did register his name, stumbled on his actions and even claimed that he was the founder of WikiLeaks.

At first, Snowden was amused, but his face contorted into surprise, disbelief and ultimately horror while viewing the video.

To which Oliver replied, “On the plus side, you might be able to go home because it seems like no one knows who the f*ck you are or what the f*ck you did.”

Are some of us really this ignorant to what's going on? Do many of us not know or care about the American exiled in Moscow for one of the biggest and most significant data leaks in the 21st century? If there was a Bond Girl in all of this, would more people tune in?

For example, a 2009 poll from the European Journal of Communication asked Britain, Denmark, Finland and the US to answer questions on international affairs.

Compared to 76 percent of Finns, 68 percent of Danes and 75 percent of Brits, only 58 percent of Americans could identify the Taliban despite our, at that time, eight-year war in Afghanistan.

In 2014, Newsweek asked 1,000 Americans to complete the US Citizenship Test, and only 29 percent could identify the vice president and nearly 75 percent couldn't correctly say why America fought the Cold War.

According to Andrew Romano, in an article published in Newsweek, “For more than two centuries, Americans have gotten away with not knowing much about the world around them.

But times have changed — and they've changed in ways that make civic ignorance a big problem going forward. While isolationism is fine in an isolated society, we can no longer afford to mind our own business.”

Aside from the d*ck pic fiasco detailed between Oliver and Snowden, which finally captured the attention of the Times Square video's interviewees, Oliver's episode on government surveillance illustrates the mainstream American apathy towards both politics and mindful self-interpretation of the news.

Or is the outcome of the June 1st vote on renewing sections of the Patriot Act, or the possible House and Senate votes on the Cyber Information Sharing Act (CISA) during the week of April 20th simply too complex when compared to smaller, easier daily struggles, like taking tax forms to H&R Block or having Bill O'Reilly smush his opinions into my eyeballs?

Snowden has sacrificed his way of life and freedom for the Pandora Box of information he has unloaded.

The guerrilla artists in Brooklyn sacrificed six months for an idea, even if the idea was only visible for a chilly Monday morning.

But who are people like Snowden and the artists fighting against? Is it government domestic spying policies or the apathetic attitude of the majority? Ignorance or stupidity? Lack of information or lack of ability?

Obviously, both the American public and media must make a more concerted effort to pay attention to pertinent issues, or we will all pay the price.

Citations: How Ignorant Are Americans? (Newsweek), Opinion: The unnoticed expansion of domestic surveillance (The Tech Online Edition), WHY JOHN OLIVER CANu2019T FIND AMERICANS WHO KNOW EDWARD SNOWDENu2019S NAME (ITu2019S NOT ABOUT SNOWDEN) (The Intercept), John Oliver presses Edward Snowden on whether he read all leaked NSA material (The Guardian)