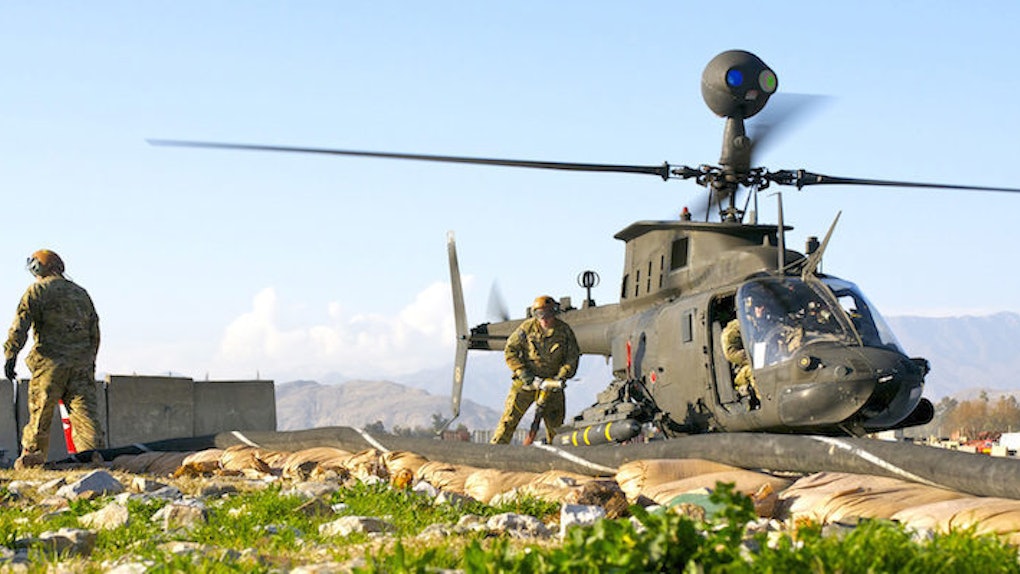 America Forgot All About Afghanistan, But We're Still Fighting There

In December 2014, after 13 years of fighting, the United States formally ended its combat mission in Afghanistan. The war claimed 2,224 American lives and, combined with the Iraq War, cost an estimated $1.6 trillion.

For more than 13 years, ever since nearly 3,000 innocent lives were taken from us on 9/11, our nation has been at war in Afghanistan. Now, thanks to the extraordinary sacrifices of our men and women in uniform, our combat mission in Afghanistan is ending, and the longest war in American history is coming to a responsible conclusion.

But the truth is, the war never really ended and it's goals were never fully accomplished. The official cessation was more rhetorical and symbolic than actual. It was a spectacle meant to fulfill promises made by President Obama while appeasing a public that exhibited complete disdain or disinterest toward the war.

At the moment, close to 9,800 US troops remain in Afghanistan and American tax dollars are still being spent there.

The Taliban still poses a significant threat and data from iCasualties shows at least eight US soldiers have died in Afghanistan this year.

Indeed, the war is not truly over. American troops are still fighting and dying in a country their own people pay little to no attention to.

This week, the Taliban seized Kunduz, marking the first time the militants have taken a major city in Afghanistan in 14 years.

Where the Taliban are in Afghanistan and where they're going, mapped by @nytgraphics http://t.co/6eaAXdxHhB pic.twitter.com/uSBg4AwF9Z — New York Times World (@nytimesworld) September 30, 2015

The US responded with airstrikes and deployed special forces in an effort to push the insurgents back. But this hasn't been very effective thus far.

The situation is dire and is yet another reminder that Afghanistan remains highly unstable, even as the US military continues to have an active presence.

As the New York Times puts it:

Over the past three days, the Taliban have achieved what appears to be their largest military victory in a war that has gone on for more than a decade. Not only have insurgent forces captured a city of about 300,000 — the first urban center the Taliban has held since 2001 — but as the Afghan government struggles to respond, it has become clear that not only Kunduz but also a large chunk of Afghanistan's north is at stake. ...Questions about how thousands of army, police and militia defenders could continue to fare so poorly against a Taliban force that most local and military officials put in the hundreds hung over President Ashraf Ghani's government and its American allies.

Some feel this is reminiscent of when ISIS seized Mosul, a major city in Iraq where US troops saw heavy fighting during the Iraq War, last June. In other words, perhaps this is a sign Afghanistan will fall back into the hands of the Taliban.

Is Kunduz, Afghanistan's Mosul? Will we end Obama admin w/Iraq & Afghanistan both crumbling? Or will US troops in Afghan be the difference? — David Rothkopf (@djrothkopf) September 30, 2015

Accordingly, the future of Afghanistan, and America's involvement there, is decidedly uncertain.

Now, US military officials are calling for a couple thousand American troops to remain in Afghanistan beyond 2016. This stands in direct contrast with the president's current plan to remove essentially all troops by the time he leaves office.

But it's not very surprising, given many argue withdrawing US troops from Iraq in 2011 contributed to the rise of ISIS. Now, the US is once again active in Iraq and has conducted thousands of airstrikes against ISIS over the past year or so.

Indeed, Obama ostensibly ended the wars in Iraq and Afghanistan over the past several years, but the US continues to drop bombs in both countries.

Meanwhile, we distract ourselves with the incendiary and ludicrous discourse of the 2016 presidential race, spearheaded by Donald Trump -- a man who thinks letting Russia fight ISIS will solve all our problems.

We can't afford to live in the dark any longer.

As a nation, if we want to avoid such catastrophic foreign policy blunders in the future, we would do well to learn from our mistakes in this regard.

We are all complicit in this mess, and it's tied to other major issues, including the global refugee crisis. Mass numbers of refugees emanate from Iraq and Afghanistan, two countries which have been completely destabilized by wars the US started and the public initially championed.

There are no simple solutions to any of the crises currently converging upon the world. But living in ignorance certainly won't solve anything.

We can't just wait until the Taliban seizes major cities, or ISIS beheads American journalists or Syrian children wash up dead on Turkish beaches to begin paying attention. By then it's already too late.

Yes, it's difficult and painful to remember long and costly wars like Afghanistan. But as we are still facing the consequences of this devastating endeavor, we have no choice but to open our eyes and accept reality or nothing will change.