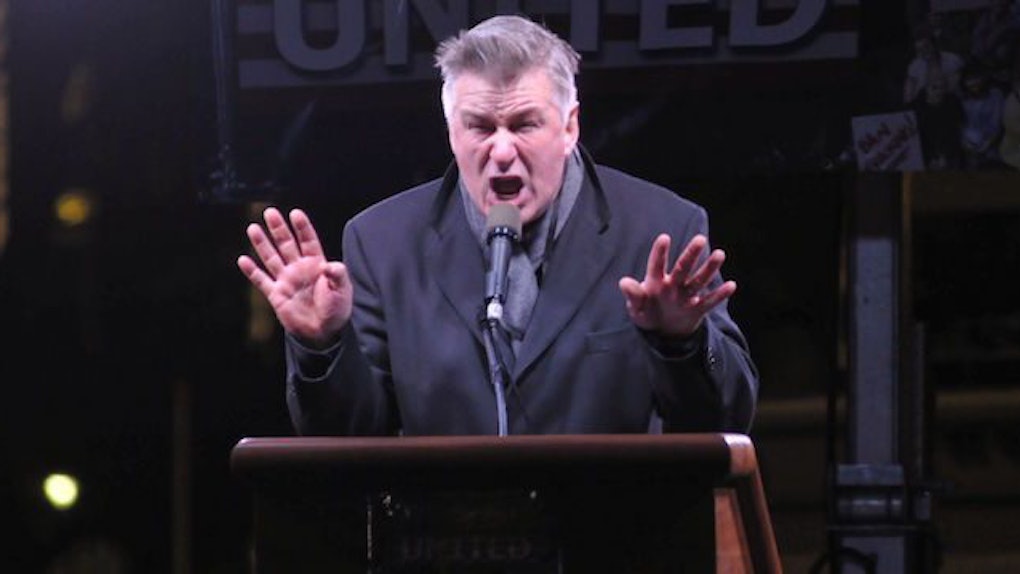 If there's anyone willing to shamelessly mock the Donald, it's Alec Baldwin.

He spoke at an anti-Trump rally in New York City called We Stand United NYC, which was organized by Mark Ruffalo and Michael Moore.

When Baldwin stole the spotlight at the podium, he certainly didn't hold back.

The actor -- who might as well be a professional Donald Trump impersonator -- began acting as the president-elect while simultaneously making jokes about having to go pee.

If you close your eyes and listen to Baldwin talk, it's almost as if you're listening to Trump himself.

Before rallying the crowd, the comedian made a long-winded joke about Donald needing to pee, but soon assured the crowd he's holding his bladder until he arrives at the Russian consulate.

I just want to say, I've been standing out here in the freezing cold for a long time.

As the crowd roars, he continues and jokingly says,

And then when I get to the Russian consulate, I'm going to have really, really long pee. Like the biggest pee I've ever had in my lifetime.

I'm going to go ahead and assume his pee will be "tremendous."

I crack myself up.

After Baldwin finished the last Trump joke he'll make before Trump turned POTUS, he started inspiring the crowd to take action during this scary time in history.

The comedian, overwhelmed with passion, urges New York not to give up now that the Republican party has taken office.

The crowd screams back, "Yes!"