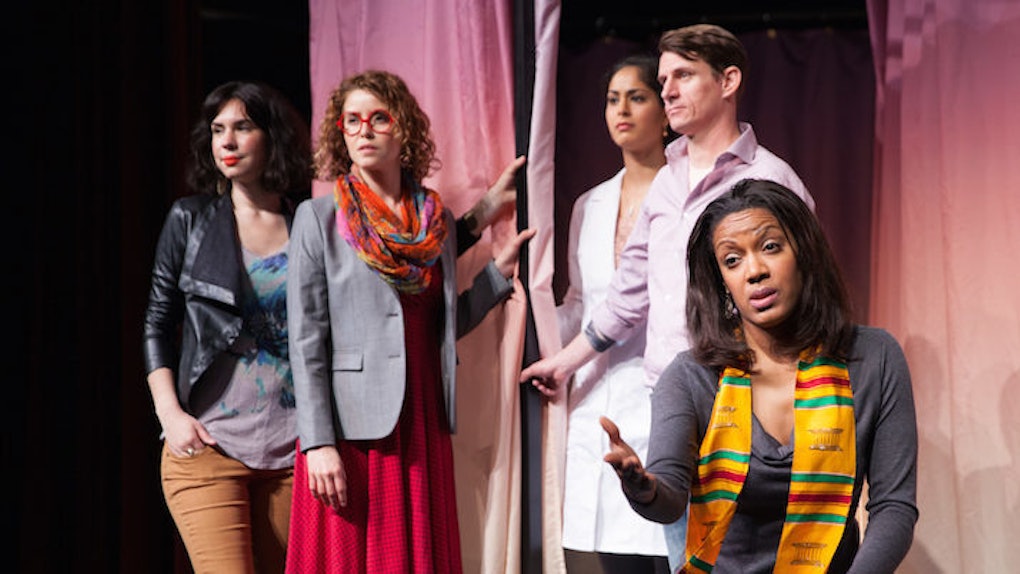 This New Play Is Trying To Change The Conversation About Abortion

About a third of women will have an abortion in their lifetime, according to a 2008 survey. But despite how common it is to get an abortion, we barely talk about it since it has become such a taboo subject.

The 1 in 3 Campaign aims to change that by encouraging people to tell their stories about abortion. People's real stories are shared on the site in written and video forms.

Now, they're making their message even clearer by presenting these stories on stage. “Remarkably Normal” is a play written through various narratives and conversations about abortion.

It features a handful of actors who talk to the audience as if directly telling them their stories. The tellings range from serious to funny, but they are all very real.

Jessi Blue Gormezano is the playwright of “Remarkably Normal.” She conducted interviews with a few people and collected video and written submissions from the 1 in 3 Campaign. These recordings make up the text of the play.

Gormezano used the experiential parts of the stories she collected rather than the political sides of what people said. She told Elite Daily:

[The play is] just sharing personal, nuanced, real stories. That act [of] just editing opinions away and letting the experiences be what people get to witness... gives the audience room to have their own opinions and their own conversations.

There are a variety of perspectives included in the play. There are stories from women who got abortions, including a married mother of four who knew she couldn't care for another child and a 19-year-old who got an abortion after growing up in a pro-life household.

The play also includes the perspectives of caretakers -- a reverend, sex educator, doctor and nurse practitioner.

There is also a story of a young man who feels conflicted about an ex-girlfriend's decision to get an abortion and a husband whose wife got an abortion when their fetus was medically harmed.

Gormezano especially wanted to include men's stories. She said:

I think it's important to recognize that there is another experience that doesn't get talked about -- even more than the female experience with abortion.

She also included their perspectives to broaden the audience of the play. It's not just for pro-choice women, Gormezano said. It's for anyone thinking seriously about the issue.

Abortion is a major political issue in America this year. The Supreme Court is arguing the most important abortion case in decades and abortion has become an issue in the presidential election.

Gormezano hopes people come to the play to understand more about the arguments around abortion and that it will spark meaningful conversations. The variety of perspectives allows the audience to look at the issue from different angles.

“Remarkably Normal” premiered in Atlanta on May 12 and is continuing in several cities through July.

But when we spoke, Gormezano had only seen the play performed for an invited audience in New York. About that performance, she said:

These are all pretty educated folks, and a lot of people walked away going, 'I learned so much, I didn't know that was a reality for so many people.' A lot of people were surprised by how little they knew about abortion care and the variety of experiences around it.

The script is reminiscent of the “Vagina Monologues” with its personal stories about, ultimately, female issues. It carries on the same tradition of speaking out loud about topics previously thought to be taboo.

But Gormezano said she wasn't thinking about activism or politicization when she was putting the script together:

I just wanted to tell their stories honestly.