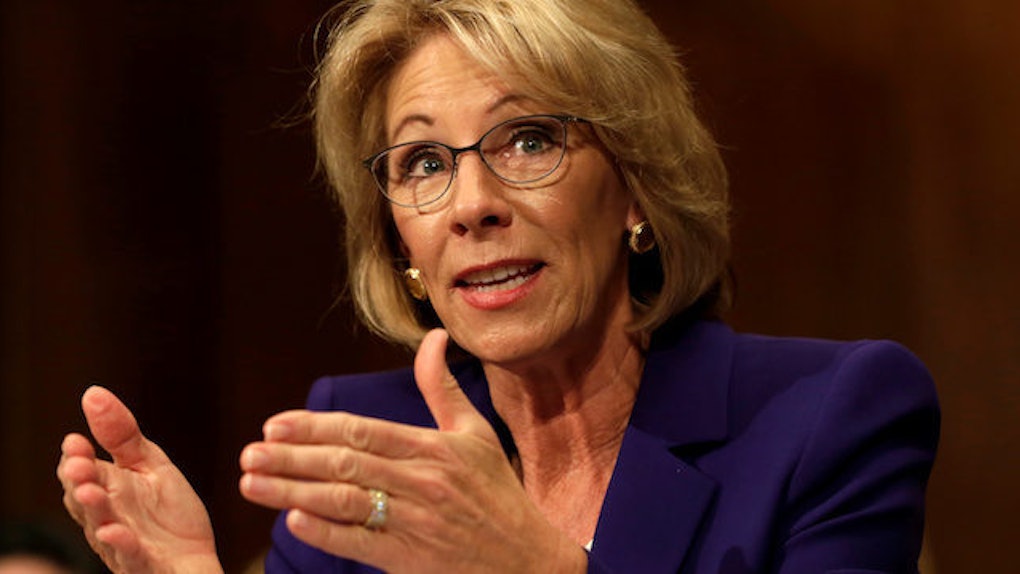 On January 20, 2017, Donald J. Trump will take his oath of office and become our nation's 45th president.

As scary as that inevitability may seem, a more frightening prospect looms: Trump's cabinet picks. A president can't be an expert at everything — hell some aren't experts at anything.

To quote Michael Douglas in the film, "The American President," “We have had presidents who were beloved, who couldn't find a coherent sentence with two hands and a flashlight.”

For that and many other reasons, the president has a cabinet.

Experts in their chosen field advise the president on issues they sometimes know little about. But what happens when the cabinet members themselves are not experts? Well, it looks like we're about to find out.

We millennials may find it hard to think of a time before the Department of Education existed. It's actually impossible — President Jimmy Carter created the department in 1979.

As a former high school teacher, myself, I've have dealt with the policies of the department first-hand. Some good and some not so good, so the pick for education secretary is one that intrigues me still, several years out of the teaching game.

According to the department's website, the goal is to "Establish policy for, administer and coordinate most federal assistance to education, collect data on US schools, and to enforce federal educational laws regarding privacy and civil rights.”

A job of this magnitude should be left in the capable hands of an expert in education, instead President- Elect Trump has chosen businesswoman and Chair of the Michigan Republican Party, Elisabeth “Betsy” DeVos.

Here's what you need to know about the future education secretary.

It's no secret where Mrs. DeVos's political loyalties lie.

She has been a member of the Michigan Republican Party since 1982. Through the years, she rose the ranks and is currently the Chair of that organization.

She has worked with Republican presidents before — during George W. Bush's reelection campaign in 2004, DeVos helped raise over $150,000 for the incumbent president.

Lions. And Tigers and Bears, Oh My

In a bizarre turn of events during her confirmation hearing, Devos said that it's up to the states to decide if schools should be gun free.

Not Originally a Trump supporter

Like many in the Republican party, DeVos didn't exactly pull out the welcome wagon for Donald Trump. She donated money to Jeb Bush and Carly Fiorina before officially backing Florida Senator Marco Rubio.

In fact, Mrs. DeVos was quite critical of the Donald, telling the Washington Examiner that Trump was an “interloper” who “did not represent the Republican party.”

Funny how her opinion of Mr. Trump has changed.

It's no secret that Mrs. DeVos has friends in high places. She has routinely been in association with the former first family of the Republican party, The Bushes.

Not only did DeVos play a key role in George W. Bush's reelection, she has received an endorsement from Bush matriarch Barbara and has also worked with her son, former Florida Governor Jeb Bush.

In fact, Mrs. DeVos serves as a board member of Jeb Bush's education think-tank Foundation for Excellence in Education whose stated goal is to "Build an American education system that equips every child to achieve his or her God-given potential.”

Which sounds nice in theory, but making that a reality has proven quite hard for the Michigan Republican.

Fancy's herself an Education Expert

Despite not ever being a teacher, Mrs. DeVos is one of those people who believes that complaining about something enough makes her an expert at it.

The DeVos pick is like taking your child's teacher out of the classroom and replacing them by, going outside and asking “Does anyone have any ideas on education?”

And picking the loudest person who screams “Yes!” Say what you will about Mrs. DeVos, well educated, smart businesswoman but teacher she is not.

This is something that can prove dangerous. If we look at Mrs. DeVos's record with the Detroit Charter School System, one could argue that the danger has already been felt.

DeVos was one of the primary architects of the Detroit Charter School System, which in recent years has performed abysmally. The Detroit system had the lowest National Assessment of Educational Progress reading and math scores. DeVos has also had her hand in pushing statewide education reform that has led to Michigan being one of five states with declining reading scores.

Betsy DeVos is a staunch advocate for school vouchers and school choice.

She has even been quoted as saying public schools are a “monopoly” and a “dead end.” In a speech delivered at the SXSWedu convention. DeVos believes that “opening up” the public school's system to investors and entrepreneurs will give parents a greater choice of schools.

In an assessment of DeVos's education positions, a New York Times piece by Kate Zernike stated, “It is hard to find anyone more passionate about the idea of steering public dollars away from traditional public schools than Betsy DeVos.”

It has been several years since I was a public-school teacher. From time to time, I still speak with my former colleagues — my fellow brothers and sisters in arms.

No matter what changes the overwhelming consensus is that things can get better and need to get better. Education sadly often falls by the wayside. It's not as “sexy” as a topic as taxes, war and the fight for marriage equality.

I believe if more Americans paid attention to education as they did those topics, many of the improvement that our schools need would have been implemented.

Betsy DeVos is a smart and capable woman, but that does not mean she is qualified to run the nation's education department. Her record in Michigan alone should be proof of that.

Mrs. DeVos is not that person. To quote former presidential candidate Ross Perot, “Just because you ran the corner store don't mean you can run Walmart.