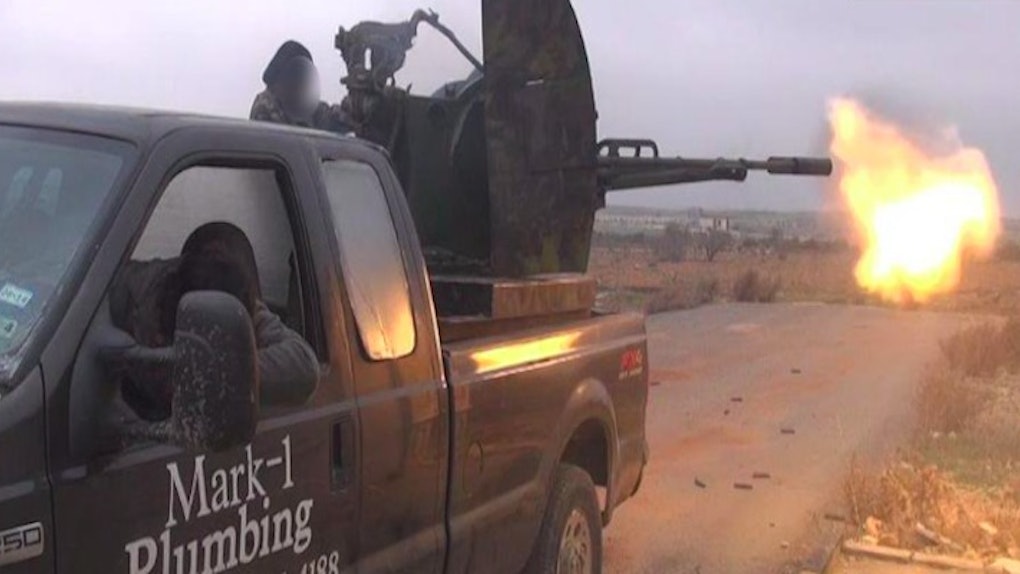 A year ago, Texas plumbing company Mark-1 Plumbing made headlines not for its impeccable ability to snake a drain, but for its apparent association with Jihadi terrorist group ISIS.

The truck, pictured below, was allegedly bought for ISIS (aka ISIL, or Daesh) with the company decal and telephone number remaining on the driver's side door.

According to the lawsuit, an employee of the company attempted to peel the decal off at the time of the trade-in. A Ford employee said it would blemish the paint, however, and assured the dealership would take care of it before sending it to auction.

It was at the auction where the truck was reportedly exported to a buyer in Turkey. In the photo above, the Mark-1 Plumbing-branded vehicle is pictured in Syria with an anti-aircraft weapon being operated by a jihadist in the bed of the truck.

Within 48 hours of the photo going viral, Mark-1 Plumbing Owner Mark Oberholtzer learned of the shocking news, and by the end of the day, received over 1,000 phone calls, according to the lawsuit.

These phone calls were in large part harassing and contained countless threats of violence, property harm, injury and even death. ... Secretary Juli Hammonds refused to return to the office as she feared for her life and well-being. Mark himself was fearful. Mark's entire family was terrified. As a result, Mark was forced to shut Mark-1's office and all business operations down for seven days, costing substantial lost revenues and business good will.

It goes on in detail about the several attempts made by news stations and news agencies to cover the story and obtain interviews from Mark and his family and even third-party connections to the situation.

The photo of the Mark-1 Plumbing truck in Syria also appeared on a segment of "The Colbert Report" at the time of the incident, called "Texan's Truck In Syria," which accrued nearly 2.5 million viewers, the most-watched episode in the show's history.

The lawsuit reports the segment only did further harm for Oberholtzer and his family, as the threatening phone calls increased to 100-200 per day for the following three weeks.

In the wake of the harassment and fear he feels for himself, his family and his coworkers each day, Oberholtzer started carrying a handgun for protection. He claims he has sustained damage to his personal and professional reputations, in addition to mental anguish and loss of income.

All things considered, Mark-1 Plumbing is asking the dealership, Autonation Ford Gulf Freeway in Houston, Texas, for $1 million in damages.

Editor's Note: It was originally reported Caleb Weiss was a member of the Ansar al-Deen jihadist group. This is incorrect and has been redacted.

Citations: A Texas Plumber Has Filed a Lawsuit After a Picture of ISIS Using His Pickup Truck Went Viral (Esquire)