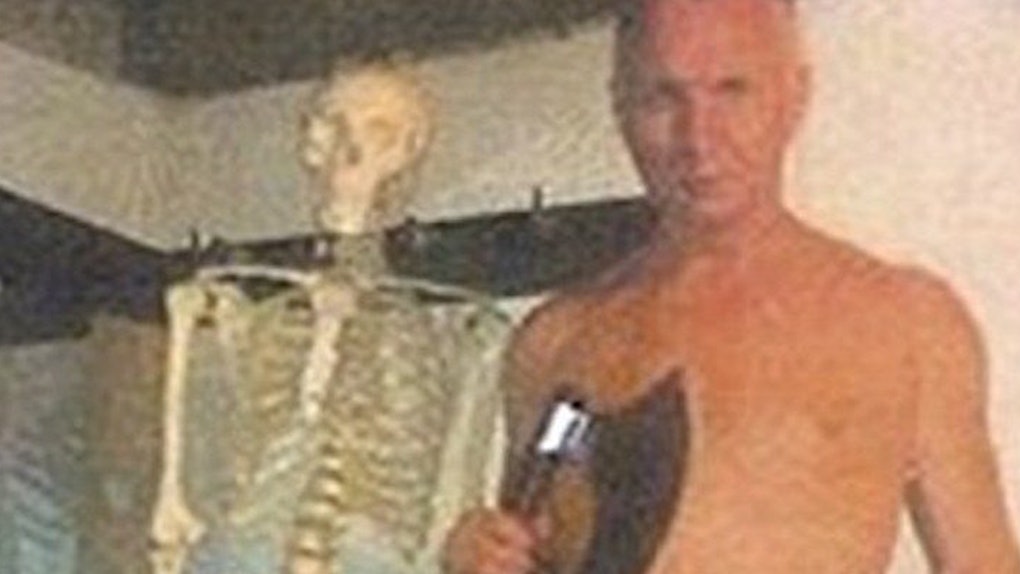 From time to time, some seriously disturbing stuff ends up on the internet.

Case in point: A photo of a cannibal posing naked with an axe in the room where he allegedly ate his victim.

The snapshot shows Detlev Guenzel, a German cannibal killer, holding a large axe as he stands alongside a skeleton wearing nothing but his socks, a pair of sandals and a creepy smirk.

Apparently, the photo was taken in the basement where Guenzel killed a willing victim he had met on the internet by chopping the man to pieces.

According to police, Guenzel, who is actually a police forensic specialist, murdered a Polish businessman named Wojciech Stempniewicz and then partially ate him in a cellar located in the mountains near Dresden, Germany.

Police discovered Stempniewicz's dismembered corpse outside in Guenzel's garden. However, the victim's penis and one testicle were nowhere to be found.

According to court reports, Guenzel had met Stempniewicz online, where the Polish businessman used the alias "LongpigHeszla" on disturbing websites dedicated to bondage and torture.

Stempniewicz harbored sick fantasies of being killed and eaten, and as a result, he scoured the internet for a year in order to find someone who would carry out his dark wishes.

The courts heard Stempniewicz sent a message to someone with the username "Butcher755" on the cyberspace forum Zambian Meat in November 2012. He asked about a device in his house that was designed to winch-up a corpse after it had been killed.

In the message he wrote,

Can you describe a little more the room and your equipment? Did you check the load-bearing capacity of the rods? Will it withstand my weight?

Then in November 2013, Stempniewicz met with another person who he had found online with the username "Caligula," who ended up being Guenzel.

Guenzel picked the 59-year-old businessman up from a bus station in Dresden on November 4, 2013 and drove him to the bed and breakfast that he operated with a gay man in the Erzgebirge Mountains.

According to testimony at the first trial, Guenzel then brought Stempniewicz down to the basement of the B&B where he slashed the victim's throat and collected his blood in an old paint can.

Authorities began searching for Stempniewicz, after his fiancee, a Russian woman identified as Svetlana, called police to report that Stempniewicz has never returned home.

Police discovered that Guenzel was their prime suspect after they traced 'Caligula' through computer messages and telephone calls he had exchanged with Stempniewicz prior to his death.

In 2014, Guenzel was arrested at the police headquarters where he worked as a handwriting specialist in the forensics department and confessed to chopping up Stempniewicz's corpse.

However, Guenzel claimed the victim hung himself and that he did not eat the flesh of his victim.

During the trial, Guenzel told the court he was not responsible for his murder.

However, in April 2015, Guenzel was found guilty of killing of Stempniewicz and sentenced to eight-and-a-half years in jail.

After the sentencing, his case was overturned by Germany's supreme court, the Federal Court of Justice, due to the fact that the suicide defense was not "adequately probed" during the initial trial.

During the second trial, Guenzel told the court,

I am really sorry, I am partially responsible, but I am not a murderer.

Now, Guenzel's second trial in Dresden, Germany has just come to a close.

Guenzel was found guilty of murder and disturbing the peace of the dead.

The prosecution sought to have Guenzel locked up in prison for life.

However, judges gave the convicted murderer some leniency since evidence showed Stempniewicz wanted to die. His original eight-and-a-half year jail sentence was extended by just one month.

Citations: Naked German cannibal killer poses in sandals and socks with an axe in the basement where he murdered and chopped up WILLING victim he'd met online (Daily Mail)