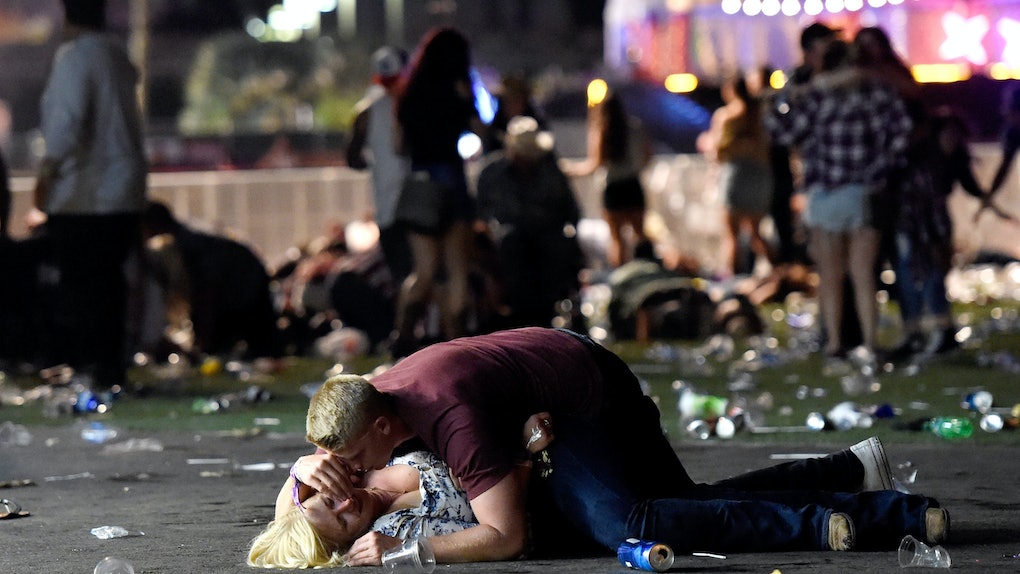 Late in the evening of Oct. 1, the bright city of Las Vegas went dark. A lone shooter, reported to be a male Nevada local, opened fire over a Jason Aldean country music concert from the 32nd floor of the Mandalay Bay Resort and Casino. Photos of Las Vegas shooting paint a gruesome picture of the confusion and horror, while also capturing the heroic efforts of civilians and law enforcement agents. The following photos contain sensitive, graphic content.

According to The New York Times, sounds of automatic gunfire rose louder than the music from the three-day festival. As concert attendees scrambled, one shouted “Get down,” while another instructed others to “Stay down.” The situation was reported to authorities at 10:08 p.m. and carried on until just before midnight, when Las Vegas police confirmed that one male shooter was down. That shooter was later confirmed to be a Nevada resident. His female companion was initially named a person of interest in the aftermath of the shooting, but was later cleared of involvement in the crime.

The shooter lived in a retirement community in Mesquite that was searched, revealing ammunition and one firearm. A sweep of his hotel room at the Mandalay, which he had checked into on Thursday, turned up more than 10 rifles. The shooting became the deadliest in U.S. history, with 58 people dead and 515 reported injuries, as confirmed by Las Vegas Sheriff Joe Lombardo.

SWAT teams and police are reported to have responded to the harrowing scene within minutes.

Concertgoers, many clad in cowboy boots, ran away from the sound of gunshots.

Evacuees grabbed and held onto each other while escaping the scene.

A male concertgoer used his body as a human shield for a female attendee during the onslaught of gunfire.

Another man and woman squatted for cover during the Route 91 Harvest festival.

A woman and man in cowboy hats rushed to escape the madness.

First responders wrapped victims in blankets and transported them to area hospitals.

Police stopped a man who drove down a closed street, near Tropicana Avenue and Las Vegas Boulevard, in the aftermath of the shooting.

People banded together to help transport a shooting victim through the wreckage.

Many people removed their shirts to offer as coverings for the wounded. 515 people were reportedly checked into the hospital for injuries sustained during the attack.

A lone cowboy hat covered the concrete in a deserted area.

A trio of attendees crouched down and held hands through the havoc.

A group of attendees gathered for an emotional embrace.

A barefoot woman fled the hectic scene, where the shooting was reported to have lasted for more than 10 minutes.

Paramedics tended to both shooting victims and victims of the stampede exiting the concert, which drew nearly 22,000 people.

Crowds rushed to take cover and exit the stage areas, while others gathered to care for shooting victims.

The Route 91 Harvest festival had the capacity for 40,000 guests, and tickets for the three-day event were sold out.

The shooter reportedly fired at the country music festival from the 32nd floor of this 43-story hotel. The entire hotel was placed on lockdown during and after the catastrophic events.

The shooter is believed to have taken his own life. Officers descended upon his room at the Mandalay and found his body with a gunshot wound. The deceased shooter has a brother, who lives in Orlando, Florida, and spoke with the Orlando Sentinel: “We are completely dumbfounded,” he said. “We can’t understand what happened.” According to family members, the shooter made his living by renting apartment buildings and led a gambling lifestyle. He was also a licensed pilot with two planes and has a hunting license issued from Alaska.

Elite Daily has elected not to distribute the most gruesome photos, as at this time, not all victims have been identified and not all families notified. Here's how you can help those intimately affected by this tragedy.