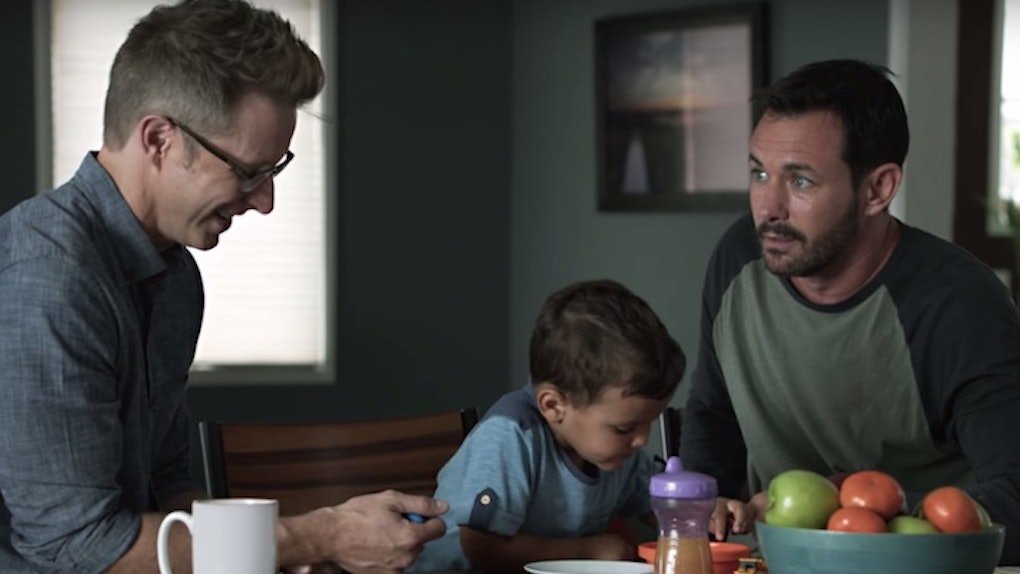 People Are Losing Their Sh*t Over A Campbell's Soup Ad

Some people are apparently very particular about who can eat soup.

About the campaign, Yin Woon Rani, Campbell's VP of marketing activation, said in a statement,

We wanted to show actual families, which means families of different configurations, cultures, races and life choices. The American family is changing faster than at any time in recent history and it is now a true mosaic of shapes and sizes, all bonded through love, and love of good food.

For its newest video, Campbell's featured real-life married couple Larry Sullivan and David Monahan, along with their son, Cooper.

In the commercial, the dads do their best Darth Vader impressions to coax their little one into eating his dinner. It's 40 seconds of pure adorable.

However, some people are having a hard time accepting Sullivan and Monahan as “the new normal” as portrayed in the campaign, which aims to showcase the different faces and dynamics of modern-day families.

Horribly disgusting. This is not real life, its a real sin.

Well I just threw out the cans of chicken noodle. nice knowing ya.

Even One Million Moms, an organization dedicated to fighting "filth" in media, got in on the action, calling for its supporters to complain to Campbell's and ask the company to take the ad down.

A statement on One Million Moms addressing the controversy read,

Obviously, Campbell's is sending the message that homosexual men are raising children, whom they wouldn't have if a woman wasn't involved, and they are ok with it.

Obviously, the organization missed the point of the Campbell's campaign: The point is to sell soup. Plain and simple. It's about soup. And sales. And advertising.

And it's not like supporting LGBT rights is new to Campbell's. In fact, as Cosmopolitan points out, the company has a perfect score on the Human Rights Campaign's Corporate Equality Index and was also named one of the best places for LGBT employees to work.

Campbell's isn't the only brand to find itself mixed up in the wrath of One Million Moms and other Internet trolls.

Just a few weeks ago, Frito-Lay found itself in the same predicament with its LGBT Doritos.

In 2014, Cheerios dared to air an ad featuring a gay couple and their child.

Campbell's isn't the first food company to feature a gay family in an advertisement, and it will likely not be the last. They are here. They are soup. Get used to it.

Citations: People Are Already Upset About This Campbell's Ad With 2 Gay Dads (Cosmopolitan)