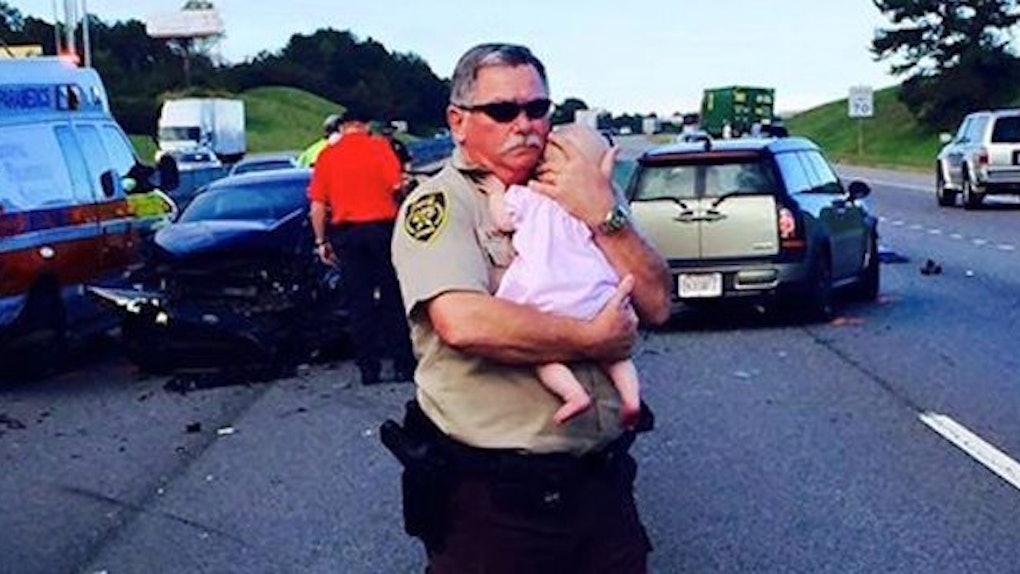 According to AL.com, the highway crash took place yesterday morning in Jefferson County, Alabama and involved an ambulance, an 18-wheel truck and three other vehicles.

Lindley, 60, noticed a woman coming out of her car with a young child about 30 yards away from the scene of the accident. He approached the clearly-traumatized woman and asked to hold the child, who he said "had a very sweet little personality."

The two were then photographed by Deputy Sanford, and according to AL.com, the resulting photo was shared over a thousand times in a matter of hours.

Deputy Ric Lindley comforts a child at the scene of a traffic accident on I-20 near Leeds this morning. Posted by Jefferson County Sheriff's Office on Tuesday, October 6, 2015

I held her for a good while, at least an hour and a half. I wanted to give her mother time to regain her composure. She's a young mother, and this was probably extremely traumatic for her.

Many Facebook users took the gentle positioning of Lindley's hands as a notion the officer must have kids of his own.

Well, their assumptions were correct as Lindley has three grown children and seven grandchildren. He added,

However, the deputy didn't understand why the picture got so much publicity and insisted he "did nothing heroic."

Cosmopolitan reports the Jefferson County Police Department stated no one was seriously injured in the wreck.