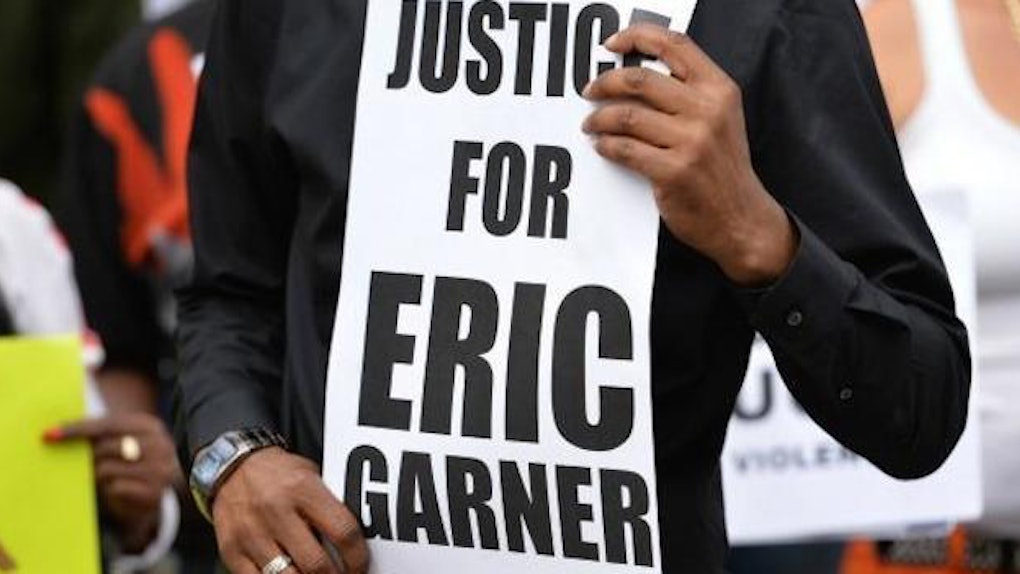 It's been an extremely horrific and difficult year for race relations in America.

In April, the death of Freddie Gray sparked deep-seated anger and protest in Baltimore, MD. Last August, unarmed teenager Michael Brown was shot and killed in the street in Ferguson, MO, and his murderer, Darren Wilson, faced no indictment.

Garner was killed, and despite video footage of the altercation, the police officer was not indicted.

Today, almost one year later, Eric Garner's estate will be paid $5.9 million from the city of New York, the same city that still does not admit liability for his death.

Mayor Bill de Blasio stated that "the important thing is to stay focused on the work of reform," and that "the whole police force is being retrained."

This, to me, sounds so, so close to an admission of guilt. Acknowledging the necessity of reform and admitting the police force is being trained to handle things differently suggests inherent responsibility for the death of Eric Garner.

So, why can't they just come out with it?

Refusing to indict even when presented with video footage of homicide is bad enough.

The lack of indictment sparked protests, where crowds chanted Garner's haunting last words, "I can't breathe," with their hands up in surrender.

But now, months later, it just doesn't make any sense the city wouldn't include some kind of apology.

Without outright admitting accountability in the death of an innocent civilian, how are we supposed to trust the police force is being appropriately retrained?

How are we supposed to believe the city and the police force understand the gravity of the situation if they'll only allude to the situation existing?

Not apologizing, just like not indicting, is a power move. It's refusing to legitimize the concerns and the fears of the black community.

It's refusing to protect and publicly stand up for the black community. It's white supremacy. And we should be so far past this by now.

I think what's even more infuriating is how close Mayor de Blasio's statement comes to an apology and the way it cleverly withholds any words that may indicate fault.

Redirecting our attention to the future without acknowledging the failures from the past and the shortcomings of the present is just a rhetorical trick that doesn't hold any weight when it isn't coupled with the city taking responsibility.

We have to talk about race if we want to improve racial tension in the United States, and our leaders need to acknowledge they play a huge role in helping to orchestrate the changes our country needs to make.

President Obama, for example, who was disappointingly silent on issues of race throughout most of his presidency, gave a powerful eulogy for the murdered Reverend Clementa Pinckney.

Our culture permitted the racism of the shooter in Charleston (whose name I don't believe should be advertised) to grow and morph into murderous rage.

When we are a country that doesn't admit to racism and to misdeeds at the hands of innocent people, we are a culture that approves of racism and hatred, even if that approval isn't in the form of waving Confederate flags and using racial slurs.