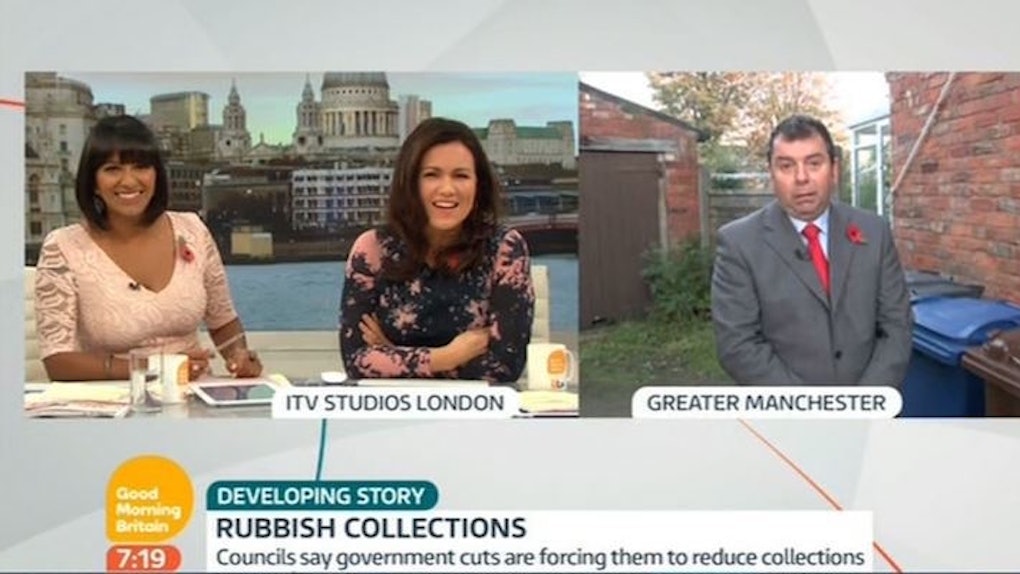 All of us have work nemeses who we wish would fall into a vat of Batman-style chemical waste that will make their outsides look as mutated as their capitalist insides.

The name of MY work nemesis, you ask? I'M NOT TELLING YOU, BECAUSE THIS IS A PUBLIC PLATFORM.

I'M NOT STUPID. STOP TRYING TO TRICK ME INTO TELLING YOU.

OK, OK! HIS NAME IS BLANE, AND HE USES HIS VINTAGE LEATHER JACKET AND MANY IMPRESSIVE PINS TO INTIMIDATE ME INTO GIVING HIM COMPLIMENTS.

During a segment on "Good Morning Britain," Alan Quinn – who was being interviewed – joked about how one of the hosts, Susanna Reid, had to recycle all the Prosecco bottles she drank at some event.

The segment was about garbage collectors.

When he's asked to repeat himself, he goes, "I heard you stayed up 'til 3 'o'clock drinking Prosecco."

Don't count people's drinks, Alan. You and BLANE would get along.

She responded with, "OK. I wasn't drinking Prosecco...  but thank you very much."

It's sort of hard to understand him because ENGLISH PEOPLE, but needless to say, the moment was extremely awkward. I'm sure she went home, made an effigy of the man, covered it in iguana blood and ritualistically lit it on fire.

That's normal, right? Because that's what I do every night after BLANE tells me my jeans aren't ripped enough to be in his Instagram photo. Fucking BLANE.

Twitter feeds on awkward news interactions like marine life feeds on a dead whale on the sea floor. (I think I've been watching too much "Planet Earth.")

Apparently, Alan was the only person who thought it was appropriate...

... to attempt a joke about someone drinking too much on live television.

Kind of not the right venue to "take a chance" with a joke like that.

Mind your own business next time, Al.