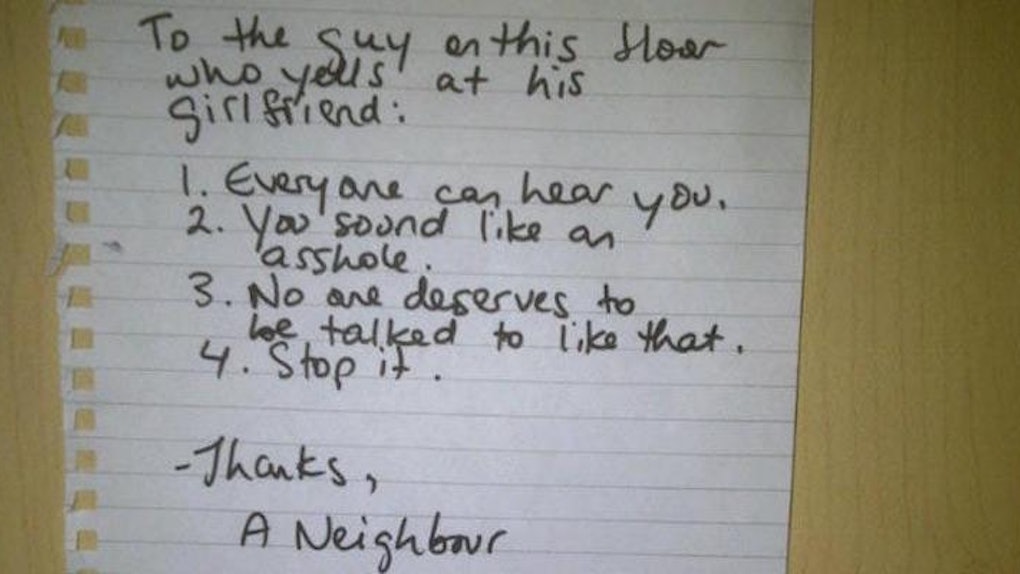 Neighbors Use Post-Its To Shame Man Who Yells At GF: 'Everyone Can Hear You'

The life blood of domestic abuse – both verbal and physical – is isolation.

Abusers will cut their victims off from the world, from friends and from help. And because it is done in the home, people on the outside often fear it's not their place to intervene.

That's exactly why domestic abuse is such an insidious, brutal epidemic: both in this country and around the world.

It's hidden away. It's done in an audience of two: the abuser and the abused. If there are any other witnesses, they are most often children.

In fact, abusers can become so confident in the social protection of marriage or living together, they get increasingly bold when it comes to their abuse.

Such is the case with this man. He clearly didn't feel any embarrassment about yelling at his girlfriend day in and day out. He was certain his neighbors wouldn't feel like it was their place to say anything.

These two notes were posted on the couple's apartment door. (Notice the randoms writing "Likes" and "Likes this x2" on one of the notes.)

The notes call this man out for his abuse, and encourage his girlfriend to not put up with this kind of treatment.

As our world becomes more familiar with and less tolerant of the telltale signs of domestic abuse, the cocoon of safety and immunity that abusers have been relying on for centuries has finally begun to fracture.

It's the same reason you'll sometimes see a mother openly hit her child in public. These people are so sure of their entitlement and immunity to outside interference.

Even when these things happen in clear view, people rarely say anything. If they do, the response "Don't tell me how to raise my kids" is quickly returned, with the unashamed confidence of self-righteous rage.

And because Reddit is both the worst and best of the Internet, so many of the comments on the post perfectly exemplify the problems that cultivate this culture of abuse and silence.

Of course, there is the "If she was the one yelling, people wouldn't care" excuse.

This kind of half-witted argument openly and willfully ignores the fact that 85 percent of domestic violence victims are women.

Between 2001 and 2012, 11,766 women were killed by their current/ex male partners. The Huffington Post put that statistic into perspective by reminding us that during that same time period, only 6,488 soldiers were killed in Afghanistan and Iraq.

Yes, this number is literally worse than the number from two wars.

Then, of course, there is this argument. It's the oldest and most resilient excuse for male violence:

Maybe she was asking for it.

Yeah, three neighbors who ALL decided that they had to intervene are overreacting and don't know the whole story.

I'm sorry, but it's safe to assume that if they all felt the need to say something, things were probably pretty bad.

OK, then there is this literal lunatic:

He starts off well. He tries to point out the difficulty of actually breaking a cycle of abuse.

BUT THEN, he goes off the fucking rails.

This guy is the most hilarious person I've ever encountered. He gives his attractiveness stats, talks about being a hopeless romantic and displays narcissism so condensed, its gravity could trap small planets into orbit.

Also, he says he's not "looking to date these girls." But then, one sentence later, he says, "I have given up the hopeless romantic side of me."

So, what he's basically saying is, "Abused women keep friend-zoning me."

This caliber of self-involvement borders on mental disability.

Thankfully, some people on Reddit get it, and they want to stop it.

Apart from the use of "bitching" as "complaining" – which undercuts all that with a healthy dose of hypocrisy, considering the subject matter – I'm glad someone finally said this.

The people who left this letter on the woman's door tried to help. But the thing is, people in abusive relationships have tremendous difficulty breaking the cycle.

On average, it takes a person around seven tries to leave an abusive partner... if he or she does at all. So think about that.