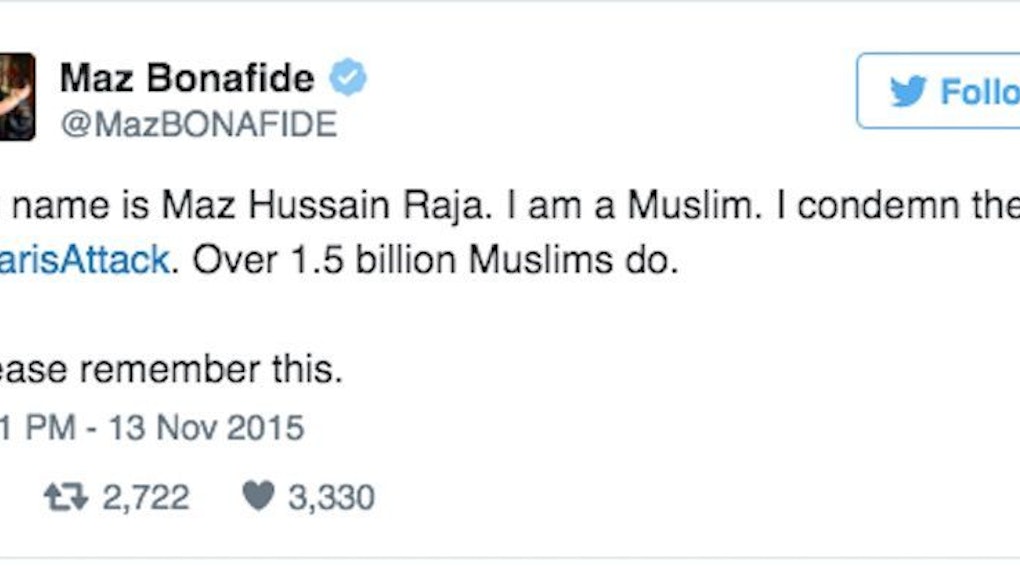 Muslims from all over the world are speaking out against the brutal attacks that killed more than 127 people and injured countless more in Paris yesterday.

Fearing Islam will be blamed for the coordinated assaults, as it was following 9/11, many are publicly denouncing extremist groups on social media using the hashtag #IAmAMuslim.

By rejecting the violence and those at fault, they hope to show terrorism is in no way sanctioned by Islam.

It's natural to need to blame someone  —  or something  —  after unfathomable tragedy strikes. But Islam is not at fault, and to believe anything otherwise is ignorant and, frankly, quite stupid.

Islamophobes were quick to blame religion in the aftermath of yesterday's deadly attacks.

But Muslims are just as horrified by the assault as the rest of us are.

My name is Maz Hussain Raja. I am a Muslim. I condemn the #ParisAttack. Over 1.5 billion Muslims do. Please remember this. — Maz Bonafide (@MazBONAFIDE) November 14, 2015

I am a Muslim. And I condemn every kind of violence. My thought and prayer are with the victims of the tragedy. #ParisAttacks #Gaza — Zafira Aziz Abdullah (@Zzaafi) November 14, 2015

That's because Islam does not sanction violence in any way; it is a peaceful religion.

We cannot blame Islam for the actions or beliefs of extremist groups.

Anti-Islam sentiment on my feed won't be tolerated. ISIS is no more representative of Islam than the KKK is of white people. — Chuck Wendig (@ChuckWendig) November 14, 2015

I am Muslim My religion is Islam I am not a terrorist I want peace #ParisAttacks — جاي (@jay_psych) November 14, 2015

And we cannot win the fight against terrorism if do not understand it.

I am a Muslim and I unconditionally denounce all violence against innocent people whoever and wherever they are. #ParisAttacks — Mohammed Shafiq (@mshafiquk) November 14, 2015

Hatred is not the answer. Understanding is.

My name is Irfan, I'm Muslim, My religion is Islam, I'm not a terrorist, I want peace. #ParisAttacks — Panda #fatbois (@MhdErfan) November 14, 2015

I am a Muslim & I totally condemn the #ParisAttacks. All my sympathies are with the victims. How the heck do we stop this from happening? — Surayya Johar (@SurayyaJohar) November 14, 2015

Citations: Muslims Globally Are Condemning Islamophobia By Tweeting Support For Paris With I Am A Muslim (BuzzFeed)