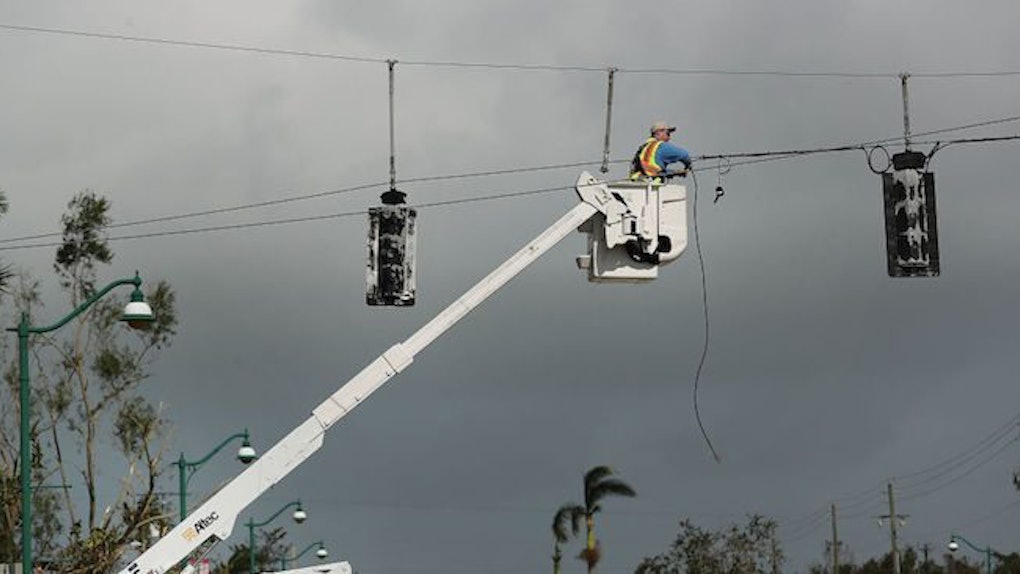 How Many People Lost Power In Florida With Hurricane Irma? Millions Are Recovering

On Monday morning, Sept. 11, thanks to Hurricane Irma, millions of Floridians were without power, and the numbers are continuing to climb. The storm was downgraded to a tropical storm on Monday, but nonetheless wreaked havoc on the southeastern region of the U.S. over the weekend. The work of restoring power could take weeks, officials say.

The outages come as no surprise. An article published in the New York Times on Friday reported that Florida Power and Light Company expected 4.1 million customers to lose power, which means it would affect 9 million people (consider that one household has more than one person). But, according to a FloridaDisaster.org breakdown of all the regions in the state without power, 6.7 million customers were without power as of 3 p.m. ET, meaning about 64 percent of all customers. How many people that might actually affect was unclear, but based on the previous estimate, it's safe to assume it's a lot more than 6.7 million. According to WESH 2, an NBC affiliate in Orlando, the number of total customers without power is over 7 million.

Florida's current population measures around 20.6 million people. According to the Miami Herald, about 800,000 out of 1.1 million Miami customers were without power. Some counties, according to the breakdown, were 100 percent without power. In an interview with CNBC, Southern Company CEO Thomas Fanning said,

People need to understand this is going to take perhaps weeks, not days in some areas.

Florida Power and Light provides a breakdown of the timeline post-landfall for restoring power to various regions. A map tracking the outages reported in the area showed the vast majority of the state was affected, and the company's website noted that there was no need for customers to report outages.

On Twitter, one broadcast meteorologist shared telling before-and-after photos; the first, a view of Florida from May 11, 2017, and the bottom, from early morning on Sept. 11.

The Federal Emergency Management Agency (FEMA) shared a graphic on Twitter instructing residents what to do in the aftermath of a storm like Irma.

On the bright side, it appears that efforts to restore power to Floridians are already well under way. The Herald reports that power was restored to 200,000 affected homes and businesses overnight, and FPL has lined up 17,000 workers to accomplish the mammoth job. The City of Tallahassee posted on Twitter that electric crews were en route to begin the task.

It was unclear how soon until cell reception is restored for customers, but according to the Herald, it shouldn't take nearly as long as for standard electricity.

The National Hurricane Center's latest advisory at 2 p.m. ET reported that tropical storm Irma was moving northwest toward southern Georgia and would head for Alabama by Tuesday morning, but the decreasing wind speed will have weakened the storm considerably. Rain was expected for the next couple of days, and storm surge advisories continue to be in effect for many regions. A flash flood emergency was also declared in South Carolina, the Times reports. As of publication, at least 44 people have been reported dead between Florida and the Caribbean, according to ABC News.

The first blush is that not only did we dodge a bullet, but we survived pretty well. Not a lot of flooding. Tree removal, debris — don't want to say it's negligible, but it's manageable.

If you were one of those whose homes were hit by the storm, though, here's a guide to what to do.