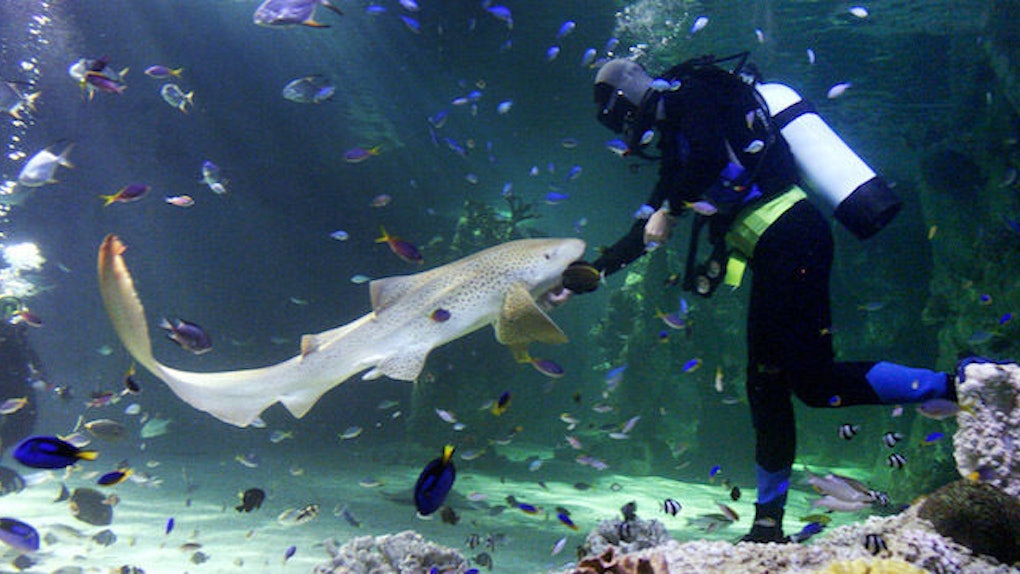 Ever have that thing where you're sitting at work, minding your own business, thinking about all the ways you can smash the patriarchy?

And then, you find out about a shark that doesn't even need a male to get pregnant and is all like, "Step aside, gentlemen, I got this on my own," and you're just like, "UGH, she's so cool. I wish I could be like her!"

Leonie the leopard shark from the Australian Reef HQ aquarium has been knocking herself up left and right, and it's the most feminist shit I've seen all year.

Leonie's using parthenogenesis, which is a natural form of asexual reproduction that allows her to develop and grow embryos without fertilization.

As if this shark couldn't get any cooler, she's basically the mom to Shark Jesus because "parthenogenesis" literally translates to "virgin creation" in Greek.

Leonie specifically has shocked and impressed researchers by becoming the first of her kind to switch to asexual reproduction after already having a mating history.

In 2013, Leonie mated with a male (it's fine, we all make mistakes) and had three pups. Then, after three years of being separated from her partner, she hatched three eggs all on her damn own.

Researcher Dr. Christine Dudgeon of the University of Queensland explained in a statement, "We thought she could be storing sperm but when we tested the pups and the possible parent sharks using DNA fingerprinting, we found they only had cells from Leonie."

Leopard sharks were also recently listed as endangered by the IUCN, making Leonie, quite possibly, their last hope and hero.

Dudgeon goes on to explain that she could have adapted due to the loss of her male mate and that only time will reveal if her badass babies can make their own babies, too.

One thing is for sure though: The future IS female (and, like, maybe a shark, too).

Citations: Leonie the shark don't need a man, begins impregnating herself instead (Mashable), Leonie the Queensland leopard shark is making history (The University of Queensland)