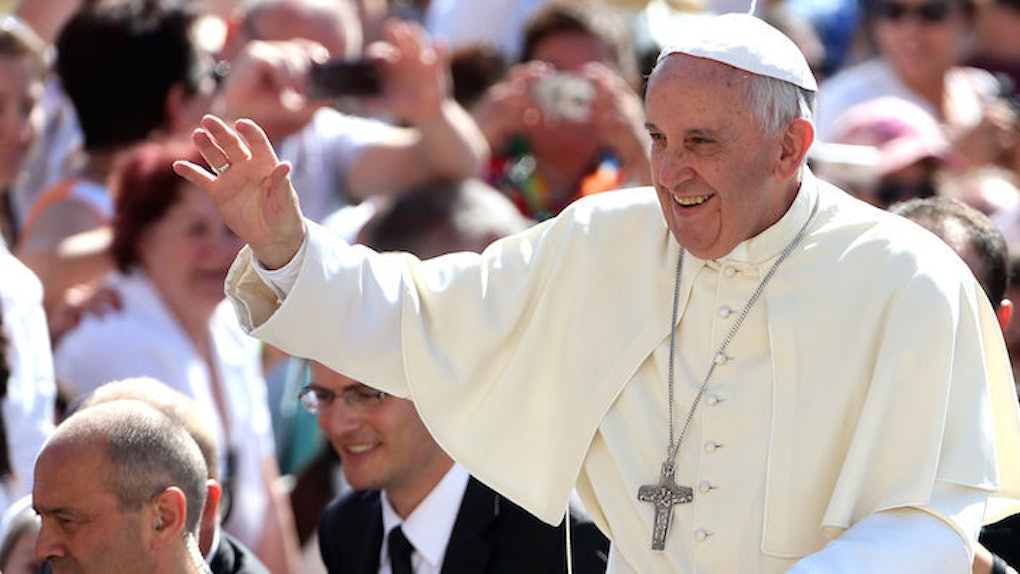 C'monnnn, Pope Francis! Why are you ruining this!?! You were doing sooo well!

Kim Davis' lawyers now claim, while the pope was visiting the US, he had a special 15-minute visit with Kim Davis telling the Kentucky clerk to “stay strong” in her battle against gay marriage.

According to Davis' attorneys at the Liberty Counsel, his holiness met with Davis and her husband, Joe, at the Apostolic Nunciature of the Holy See in Washington, DC this past Thursday, the same day the pope addressed Congress.

During the secret meeting, the pontiff allegedly hugged Kim and presented her with a rosary he blessed. Pope Francis also reportedly thanked her for her courage and asked Kim to pray for him.

I was humbled to meet Pope Francis. Of all people, why me? I never thought I would meet the pope. Who am I to have this rare opportunity? I am just a county clerk who loves Jesus and desires with all my heart to serve him.

Vatican spokesman Reverend Federico Lombardi said he had no comment on Liberty Counsel's claims, and Davis was apparently in Washington at the time for the 2015 Values Voter Summit where she received an award for opposing the federal judge's ruling.

The Liberty Counsel also says comments the pope made to ABC News' Terry Moran may have been directly about Davis.

Aboard the papal airplane, the pope said,

Specifying this idea in regard to government officials, Pope Francis said,

It is a human right, and if a government official is a human person, he has that right.

Not only did Pope Francis know of Kim Davis, he personally met with her to express his support.

That was a great encouragement. Just knowing that the pope is on track with what we're doing... It kind of validates everything.

Reverend Federico Lombardi confirmed to BuzzFeed the meeting between Pope Francis and Kim Davis did, in fact, happen. He still refused to add any additional comments.