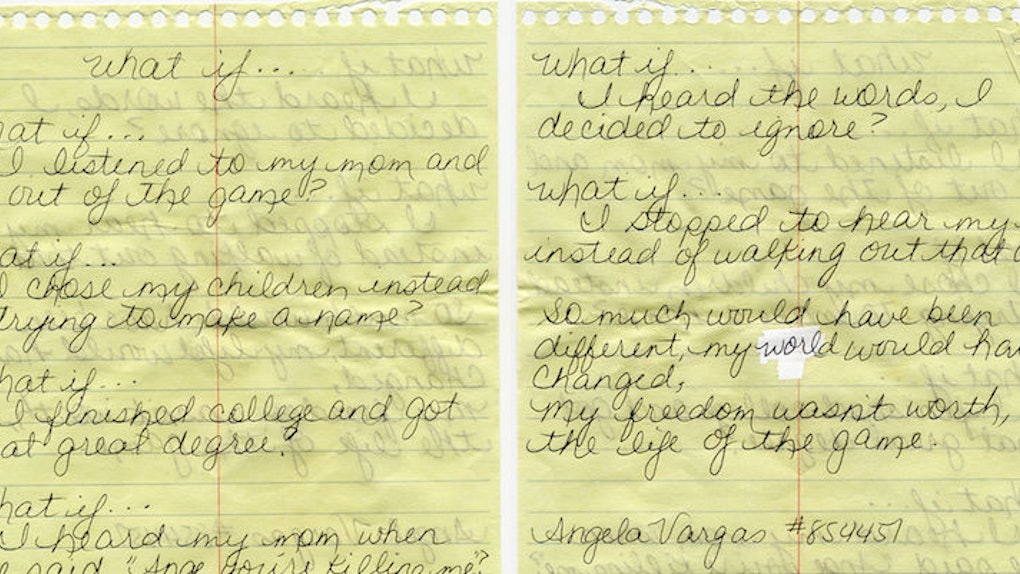 The IF Project Documentary Trailer from Kathlyn Horan on Vimeo.

The population of women in prison has been steadily growing in recent years.

The number of women in prisons and jails multiplied by about 14 from 1970 to 2014, according to a new study by the Vera Institute of Justice and the Safety and Justice Challenge initiative.

Shows like "Orange Is The New Black" have helped to raise awareness of the female inmate population and the challenges they face.

But although OITNB has helped raise awareness, it's still a fictional show with actors and plenty of dramatization.

A new documentary, "The IF Project," directed by Kathlyn Horan and airing on Logo on Wednesday night, is all about real women in prison.

Kim Bogucki, a detective from Seattle, went to the Washington Corrections Center for Women and spoke to female inmates.

She asked the women the big "IF" question: If there was something someone could have said or done that would have changed the path that led you here, what would it have been?

The project is supposed to help women leave incarceration and not return, as well as to shed light on how women become inmates in the first place.

The women are encouraged to look within themselves to consider what could have prevented time in prison and what would make their post-prison life better.

One of the most significant public safety investments we can make is to do more to prepare people leaving our criminal justice system for a successful re-entry to society. Det. Bogucki recognizes this and helping to motivate inmates for success post-incarceration. Kim is making a real difference in people's lives and I am pleased to have her input, counsel and guidance through her work on the Statewide Reentry Council and the Advisory Committee for Youth Homelessness.

Many of the women came from broken homes and experienced abuse. Many of them just needed someone to listen to them, or someone to offer them guidance.

Here, read some of the essays that the inmates wrote.

"When I was growing up I did not want to hear or listen to anyone."

"I always lived life thinking that living on the wild side was the only way to truly live."

"Ke'Wee" wrote a poem about her mother's drug addiction, becoming part of a gang and eventually finding faith in prison.

"If someone had...told me that I would not be able to see my child grow up."

"If someone would have wrapped their arms around me and said you did nothing wrong & I love you I would not be here today."

"My freedom wasn't worth the life of the game."

"I need the opportunity to contribute. I need the space to make a mistake without it being a signal that I'm coming back to prison."

"The IF Project" will be premiering on Logo on Wednesday night at 8 pm.