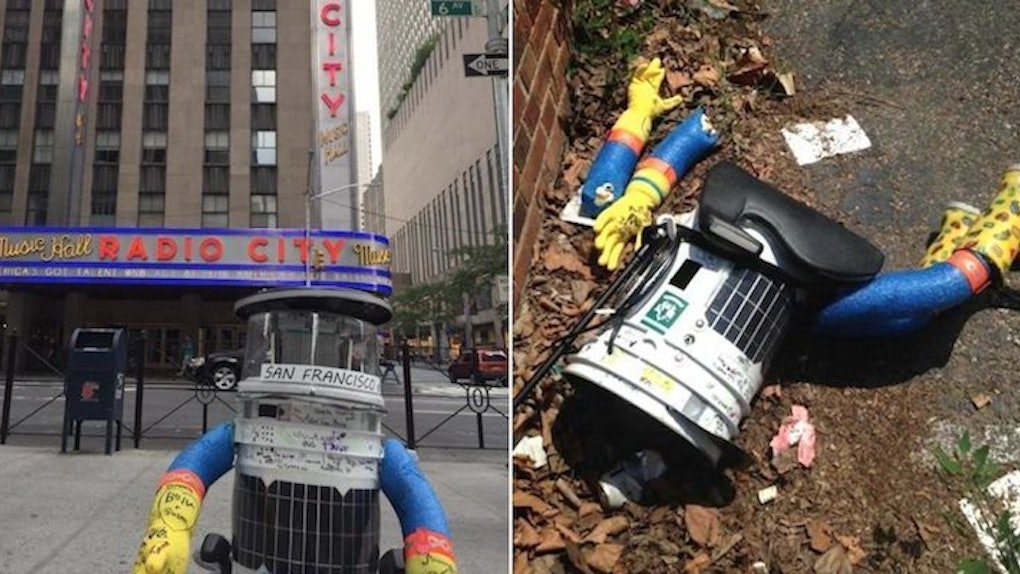 HitchBOT's cross-country journey came to an abrupt end on Saturday after vandals in Philadelphia reportedly damaged the child-sized robot beyond repair.

For the unacquainted, the talking robot was created by Canadian researchers as a travel companion and a social experiment.

HitchBOT hitchhiked through Canada and parts of Europe without incident, but the 'bot had only recently started the American leg of its travels when it was destroyed.

The main goal of the traveling robot, according to cocreator Frauke Zeller, was to encourage people to interact with artificial intelligence.

Of the project, Zeller told the Associated Press,

We want to see what people do with this kind of technology when we leave it up to them. It's an art project in the wild — it invites people to participate.

Sadly, someone interpreted that as an invitation to destroy.

Although the damage is irreparable, hitchBOT's creators said they're not giving up on the traveling 'bot yet.

In a statement, the creators wrote,

We know that many of hitchBOT's fans will be disappointed, but we want them to be assured that this great experiment is not over.

Since embarking on its American journey on July 17, hitchBOT traveled through Rhode Island, New York and Massachusetts before dying in Philadelphia.

Prior to that, it saw the Netherlands, Germany and much of Canada.

The robot's journey relied on the willingness of strangers to participate.

Those who did shared photos and stories on social media with #hitchBOTinUSA.

Sadly, the little guy died on Saturday. Until next time, hitchBOT!

My trip must come to an end for now, but my love for humans will never fade. Thanks friends: http://t.co/DabYmi6OxH pic.twitter.com/sJPVSxeawg — hitchBOT (@hitchBOT) August 1, 2015