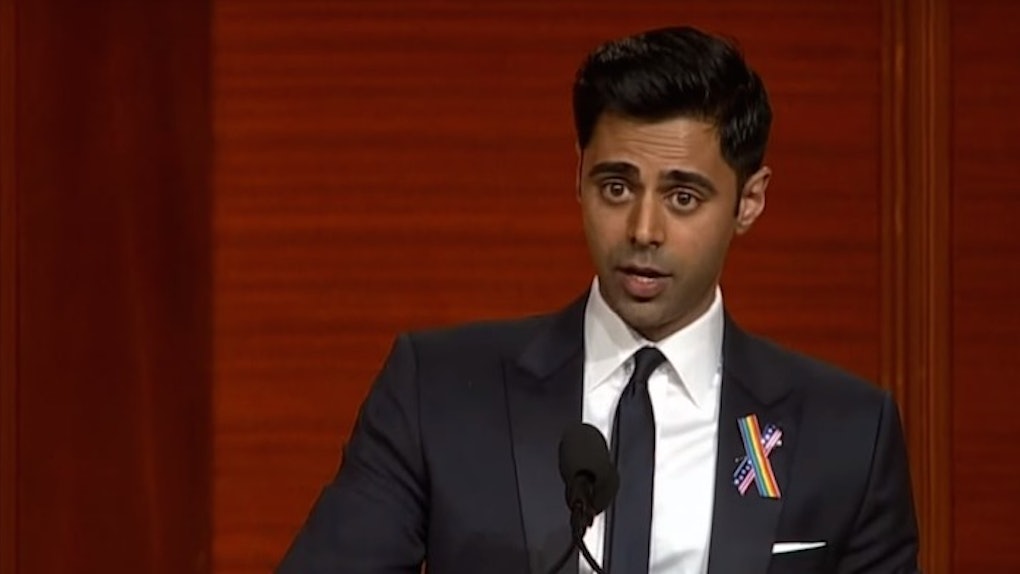 It takes some guts to be invited to speak somewhere only to basically go after and call out the people you're supposed to speak to. But, that's exactly what Hasan Minhaj, a correspondent on "The Daily Show," did on Wednesday at the 72nd annual Radio and Television Correspondents' Association dinner.

According to The Daily Beast, after spending the majority of his routine doing what he was invited to do, namely poke fun at the current state of US politics as well as the presidential candidates, Minhaj quickly got deadly serious.

After a number of funny jokes about "broccoli" and "Toyota Camry" Hillary Clinton, "racist cheeto" Donald Trump, "cool substitute teacher" Bernie Sanders and how little Congress seems to get done, Minhaj turned to gun control, specifically the Orlando shooting and what it means for society.

What we saw in Orlando was one of the ugliest cocktails of the problems that we still see here in America -- a cocktail of homophobia, xenophobia, lack of access to mental health care and sheer lack of political will -- and all of us satirists, we've all been yelling out, crying out for change, but the sad reality is that we are all complicit in what happened... We just sit there and we let it happen because it doesn't affect our bottom line... The sad reality is stuff like this is going to continue to happen unless we recognize that civil liberties are an all-or-nothing game. A rising tide lifts all boats. It's not pick or choose. So, whether you like it or not, we all have to step up and fight for each other, otherwise the whole thing is a sham. And until we do that, Hijabis are going to get harassed in the streets. Members from the trans community are going to be demonized for using the bathroom... The thing that hurts me the most is I wish I would've done more. To my brothers and sisters in the LGBTQ community and every marginalized community, I'm sorry I didn't do more.

Then he pivoted to Congress, and when he did, he hit Congress hard.

He concluded by pointing out the influence of lobbying and big donors like the National Rifle Association and asking Congress how it wants to be remembered -- as a "could've done-something Congress" that saved lives or one that was "complicit in the deaths of thousands of Americans."

Check out Minhaj's entire speech in the player at the top, or skip to the 18-minute mark to hear his final remarks about gun control and Congress.