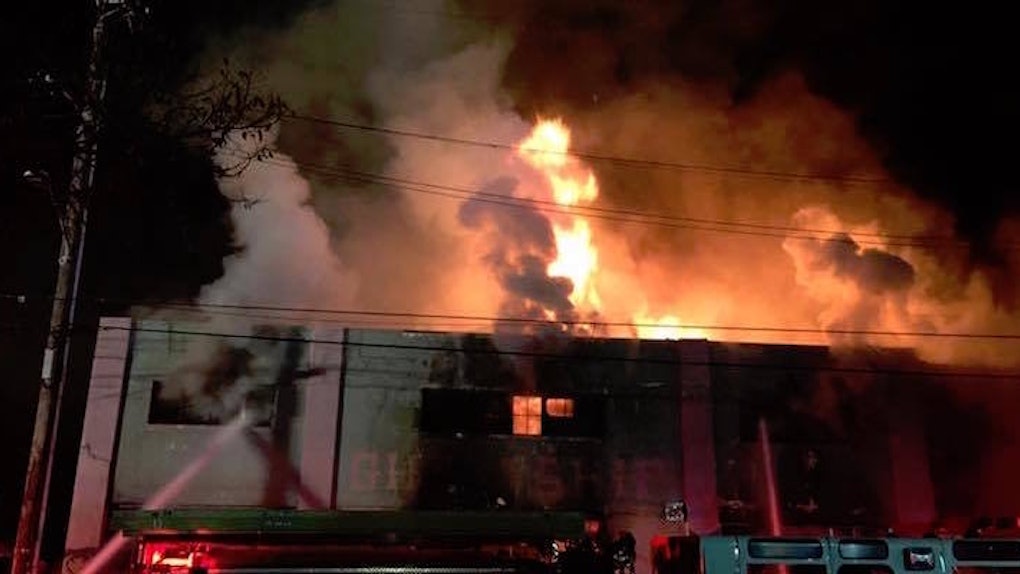 It's been reported the death toll has risen to 36, according to DailyMail.com.

Club goers at a warehouse in Oakland, California fell victim to a raging fire at 11:30 pm Friday night, DailyMail.com reports.

In an recent update by KTVU, nine people are confirmed dead and 25 people remain unaccounted for.

The confirmed nine victims were allegedly found on the second floor of the building.

The fire reportedly started on the second floor and quickly expanded to three sides of the warehouse.

It's also been reported 55 fire fighters were brought to the scene of the fire. However, once conditions inside the warehouse worsened, firefighters had to go back outside.

None of the firefighters were reportedly hurt inside the building.

The blaze has already been titled one of the deadliest single-structure fires in Oakland, California -- if not, the deadliest -- and victims trapped inside the building are still being accounted for.

Deloach Reed acknowledged the unknown number of club goers inside the building.

We still have to do a more thorough search of the building and we don't know the potential number of other victims.

This is a true loss for the city, for the firefighters who responded, and the people who lost family and friend. It's just tragic, a real tragedy.

As of 4:20 am, smoke was reportedly still pouring from the top floor of the building.

Since the blaze swept through the rave, family members and friends of those feared to be trapped inside have posted on the event page's Facebook wall.

They are posting photos and names of those who are believed to still be missing in the tragedy.

Oakland police advise anyone who has friends or family believed to be missing to call Alameda County Sheriff's Coroner's Bureau at 510-382-3000.