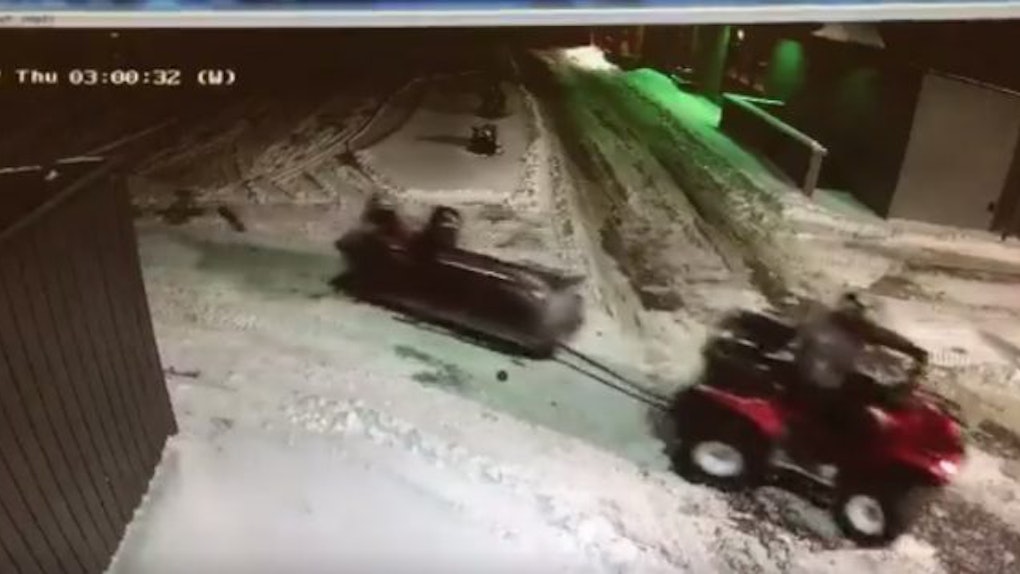 Drunk Guys Ride A Couch Through A McDonald's Drive-Thru

It seems to me I have all of my best ideas while I'm incredibly intoxicated.

Creating "garbage plates" of food by combining all the leftovers in the fridge? Great.

Constructing a 50-foot slip-n-slide out of tarps, trash bags and dish soap? Brilliant use of time and resources.

Smoking a cigarette backwards? Not my greatest.

Walking to get McDonalds at three in the morning? Give this bitch a Nobel Peace Prize.

That said -- I do always make it a point not to drive while I've been drinking, and I have never, ever had my friend tow me on a couch attached to their ATV. But the night is young.

At 3:19 am in Miramichi, New Brunswick, two men were arrested after their ATV-driving friend left them behind and led the police on a high-speed chase -- couch still attached -- through a parking lot, across a highway and onto a frozen river.

The drunk men left behind were arrested.

The driver evaded police, but the search is ongoing.

The two dudes, 28 and 39, at the drive-thru were not formally accused of a crime -- police are still trying to figure out what to charge them with.

But they were wearing helmets, so let them live.

So, obviously safety was somewhat important.

I never knew there were so many annoying laws about drive-thrus. These guys just wanted some chicken nuggets.